Southern California’s multifamily market has been ramping up 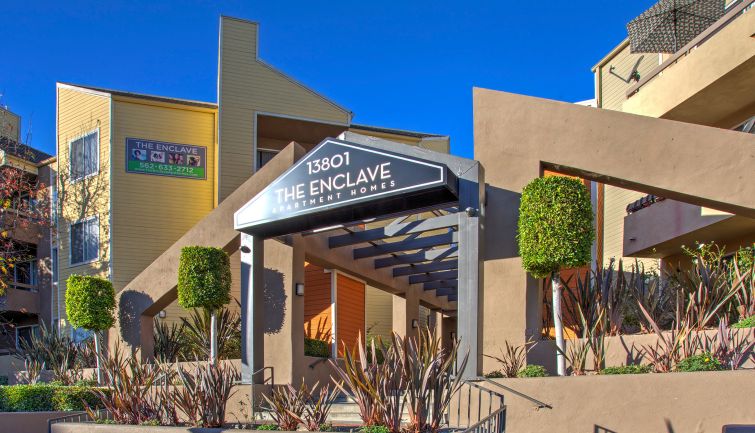 PCCP, LLC has provided a $76.3 million senior loan on the acquisition and renovation of The Enclave, a 306-unit multifamily property in the city of Paramount, southeast of Los Angeles.

A MWest Holdings and BentallGreenOak joint-venture is acquiring the asset, which is made up of seven low-rise buildings, from Bridge Investment Group, according to PCCP.

Additional terms and details about the loan were not disclosed, and representatives for PCCP and BentallGreenOak were unavailable for comment. MWest Holdings also did not return requests for comment.

The property, at 13801 Paramount Boulevard, was completed in 1991 and units range from one- to three-bedrooms with an average size of 970 square feet.

According to PCCP, it’s one of the most sizeable apartment complexes in the area; it is one of only six market-rate multifamily properties with more than 200 units in the cities of Paramount, Norwalk, Downey and Bellflower, and it is the only apartment community with more than 50 units developed in Paramount over the last 30 years.

“This is a well-performing asset in a submarket that is less than 3 percent vacant and has seen virtually no new supply over the past 20 years,” said Ron Bonneau, managing director with PCCP, in a statement.

Multifamily trades in L.A. County have been heating up, including other recent deals by Sherman Oaks-based MWest Holdings. The firm has more than 2.5 million square feet of residential and commercial property throughout the country, and frequently targets large adaptive reuse projects in L.A.

Last week, MWest Holdings announced that it sold the Guardian Arms mixed-use development at 5217 Hollywood Boulevard, as well as the historic Park Wilshire development with 170 units at 2424 Wilshire Boulevard. The two sales closed in December for a combined $64.2 million. The firm is also working on the 132-unit Santa Fe Lofts in Downtown L.A., which it purchased for $70 million in 2018.

The Enclave project will be the seventh for MWest’s joint venture with BentallGreenOak, which has been relatively more active on the East Coast. Earlier this month, Commercial Observer reported that the firm closed the acquisition of a 31-story office property at 685 Third Avenue in Midtown East in New York City. And in November, BentallGreenOak and Slate Property Group scored a $390 million refinance for a massive luxury property at 420 East 54th Street.

PCCP is a real estate finance and investment management firm with $10.6 billion in assets under management. In August, the firm was part of a joint venture that unloaded the Pacific Center office complex in Santa Ana for $97.5 million.