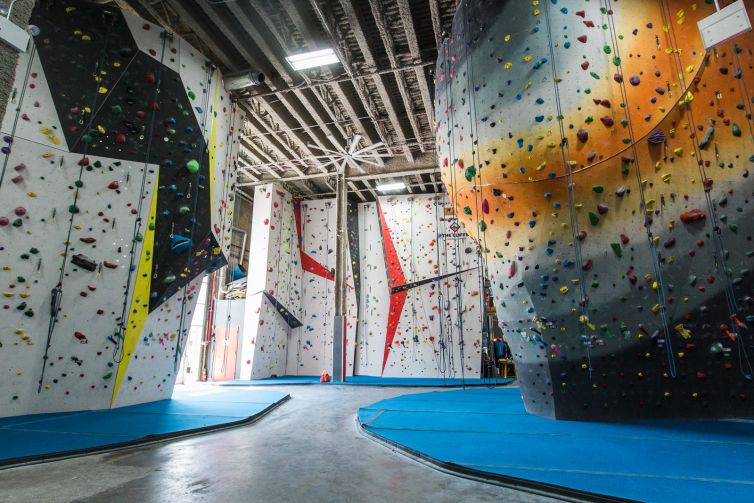 Inside The Cliffs in Long Island City, Queens. Photo: Minnow Park for The Cliffs Climbing + Fitness

We’re deep in the thick of summer and that means only one thing: Time to get some exercise!

But for those who are more interested in traditional summer treats, Ample Hills Creamery has opened a 15,000-square-foot museum dedicated to ice cream at 421 Van Brunt Street in Brooklyn’s Red Hook.

Of course, leasing over the last month was not all about summer-related fun. The last month was also about history. The Alhambra Ballroom, which was built in 1905 in Harlem at 2108 Adam Clayton Powell Boulevard, is the new address for a 20,000-square-foot Shop Fair Supermarket.

Leasing-to-buy took on a slightly different meaning than normal, when CO reported that Related Companies was taking 10,600 square feet at 505 West 19th Street for its new sales gallery to showcase two planned residential condominiums at 501 and 505 West 18th Street.

We don’t yet know the name of the restaurant that Korean chef Anna Kim is going to attach to her new 6,300-square-foot eatery at 8 West 28th Street in NoMad, which was announced last month, but consider our appetite sufficiently whetted.

If we’re noticing a theme here, it is this: there is no theme. The last month seems to be somewhat disparate in the brands and types of retail that were making moves, such as ceramics studio Bklyn Clay, which took 5,260 square feet at Greenland USA’s and Forest City Ratner’s 535 Carlton Avenue in Brooklyn.

And if that doesn’t fit in with any discernable pattern, check this out: high-end Danish electronics outlet Bang & Olufsen nabbed a 4,135-square-foot lease at 121 Spring Street in Soho.

The Pennsylvania-based Philly Pretzel Factory took not one, but two locations in the Big Apple, grabbing 3,270 square feet in Harlem at 4-14 West 125th Street, and a more modest 300-square-foot spot at 86 Chambers Street.

Lastly, there was at least one brand name that sounded familiar and was building on what had come before: Wholesome Farms Market inked a 15-year deal for its third Brooklyn location at 108 Jay Street in Brooklyn’s Dumbo neighborhood.