In Cannes for MIPIM, Brookfield’s Ric Clark Is All NYC 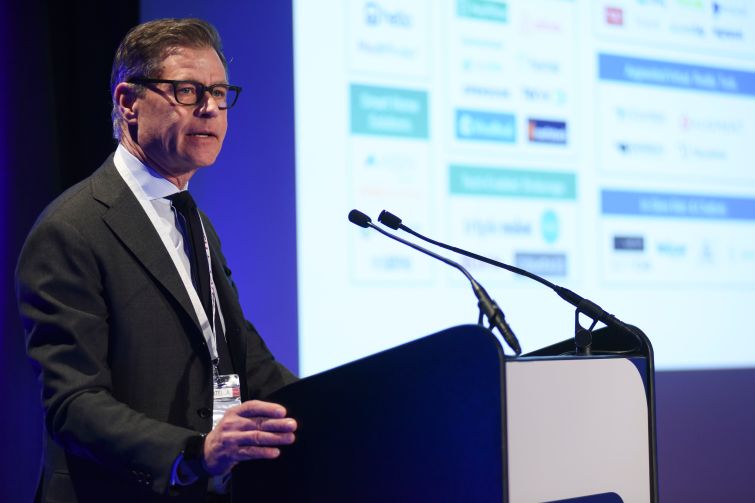 Brookfield Property Partners is no doubt one of the most active developers in New York City.

The firm recently completed the redevelopment of its 8.5-million-square-foot Brookfield Place office and retail complex in Lower Manhattan, a $250 million project it commenced in 2015. Today the property is nearly entirely leased. And the developer is building at an aggressive pace the more than 7-million-square-foot Manhattan West project.

The company is also is a partner on Park Tower Group’s 22-acre Greenpoint Landing mixed-use development in Greenpoint, Brooklyn. And on top of that, the developer recently picked up the leasehold of the HBO Building at 1100 Avenue of the Americas along with Swig Company and signed most of the space to Bank of America (386,000 square feet). In addition, Brookfield and Swig recently signed Bank of America to a 127,000-square-foot space at their adjacent property, the Grace Building at 1114 Avenue of the Americas.

Commercial Observer caught up with Ric Clark, the senior managing partner and the chairman of Brookfield, while in Cannes for his very first MIPIM (or Marché International des Professionnels d’Immobilier). His main order of business at the conference: talking about trends in the United States on a U.S. panel co-organized by CO.

But we got to talk to him about the status of the firm’s projects, Brookfield’s investment in on-demand conference space provider Convene and the company’s recent—so far unsuccessful—attempts to acquire General Growth Properties, Forest City Realty Trust and Regus parent company IWG.

Commercial Observer: You have a lot of things going on in New York City. What is the status of Greenpoint Landing, Brookfield’s foray into the outer boroughs?

So the first building opens up in August. I think it’s just shy of 400 units. The second tower will open in 2020 and we hope that we have two more towers coming up on the heels of those.

Park Tower Group brought Brookfield in to do that project. What attracted you to it?

It really started with a desire to expand our presence in the multifamily business. Up until roughly six years ago we really didn’t have any investments in the apartment sector. But looking back it’s been one of the best performing sectors, particularly in New York City—vacancy is very low—tenants tend to stay for a couple of years, and when they do leave the capital expenses are pretty modest unlike an office tenant. Granted [office tenants] stay longer, but when they leave it is a major capital reinvestment to retenant the space. So the first building that we built was The Eugene [with 844 units] at Manhattan West. We are closing in on 80 percent leased now, and it hasn’t even been open [for a year]. So basically on the heels of that and making a decision to enter the multifamily space, we looked around and thought, Brooklyn was a great alternative to Manhattan. It’s cheaper, so more affordable, and there is a lot happening in Brooklyn.

What’s going on at Manhattan West?

So 5 Manhattan West, formerly  known as 450 West 33rd Street, started as an apparel warehouse—at one point it had the Sky Rink—we were able to convert that and put a new facade, new lobby, new systems and take what was once the ugliest building in Manhattan and make it into a pretty attractive building, which is appealing to those in the innovation and technology businesses. So that [1.7-million-square-foot] building is effectively fully leased at this point.

One Manhattan West is going up. We did 1.8 million square feet of leasing [at Manhattan West] last year so overall between 5 Manhattan West, 1 Manhattan West and The Lofts building, which is a 200,000-square-foot building that we are repurposing there as well, we are 92.3 percent leased across the project. So we had a really big year there last year.

What else did you do there?

We are about to break ground on a [30-story, 164-room] hotel. We haven’t yet announced the operator. But we hope too soon. So the remaining piece is to lease out the retail. We have signed a couple of retail deals already—like Whole Foods.

So the only thing left is 2 Manhattan West—the south tower—where we are actively pursuing tenants. We have started the below-grade work [on that building].

With everything happening in Hudson Yards District, is Midtown East dead?

Between us and Hudson Yards there has been a lot of momentum over there in the last couple of years. [But] the east is not finished yet. There is a bit of a nuclear arms race going on when it comes to upgrading buildings that are somewhat obsolete [in Midtown East]. I think it’ll make those buildings more appealing. Those that don’t spend the capital to reposition their buildings and enhance them, I think are going to struggle a lit bit. But the east is not dead. We just saw the J.P. Morgan announcement [to build new Park Avenue headquarters], which was pretty huge for Park Avenue.

It’s not exactly Midtown East, but your company now has two buildings off Bryant Park with the Grace Building and the recently acquired neighboring 1100 Avenue of the Americas. Why did you want the adjacent property?

Adjacent and back connected to the Grace Building is the HBO Building, 1100 Avenue of the Americas. There is literally a floor where you could walk from one building to the other.

Interestingly, someone along the chain of ownership built what I’m going to call a “spite wall” on the back of the HBO Building. So when we acquired the Grace Building there was this solid wall that went literally up the north side of the HBO Building.

We saw this as an opportunity to help Bank of America [which is the anchor of 1 Bryant Park] create an urban campus. So they leased the bulk of 1100 [Avenue of the Americas], and also have taken some space in the Grace Building as well.

How is Brookfield Place doing?

So we’ve leased up all of the retail space and the project is 8.5 million square feet and 95 percent leased [in both office and retail]. And I just looked at the [2017] year-end sales numbers before I came here and it had very strong same-store sales.

We’ve heard millennials are to blame for the death of malls. How is Brookfield preparing for the influx of millennials that will reshape the economy?

In a year or two, millennials will make up 50 percent of the world’s working population. And by 2030, it’ll make up 70 percent. So for sure, I think those in the real estate business that are paying attention to that and making adjustments to their real estate to help employees attract, maintain and motivate employees will be more successful.

This crowd was basically born with a smartphone in their hands. And they want everything immediately and they want it efficiently, so we’ve been bringing a lot of innovation and technology to our “places.”

For example, at Brookfield Place we are beta testing an app that will package a bunch of other apps that will provide convenience to those that work within our project. You will soon be able to get in and out of the building by using your smartphone instead of a plastic badge. You will receive security alerts on a moment’s notice if there is some kind of terrorism event or some kind of emergency.

We noticed that when we opened Hudson Eats [in Brookfield Place], between the lunch hours the lines were so long that people were actually turning away. So we found an app called Ritual, with which you can sit at your desk, decide where you want to order your food from, you order your food, the food is prepared, they give you a notice when it is ready. They’ll also let you know if someone else on your floor or in your building is going down to pick up food from there and [inform you if] they’ll bring the food back to you.

Within a couple of months 25 percent of the people that work within Brookfield Place downloaded this app, and sales for the stores that use it went up 25 percent as well. So we are trying to wrap all of those with a Brookfield app just to make the overall experience just as seamless and efficient as we can.

And this is only for Brookfield Place?

We’ve been beta testing this whole thing at Brookfield Place so once we get the bugs out and its working efficiently, we’ll roll it out across the world.

How did you get to know Convene and why is Brookfield so heavily investing in it?

I got a phone call once from the CEO of [Hudson’s Bay Company]—one of our tenants—after we signed a lease with him, saying, “I’m sitting here with my architect and I’m planning my space and I’m planning a boardroom, which I am literally going to use once a quarter. And if you had something where I could rent a catered conference room once a quarter, I could use my space that I rented from you for more productive things.”

And he introduced us to Convene. And we understood the merits of it immediately.

On the one hand, I’m sure our leasing group would rather rent more space to somebody even if it is sitting idle, but I think those that listen to their tenants and solve their tenants’ problems as they relate to efficiency will be more successful.

How much has Brookfield invested in Convene?

We are the largest shareholder now. We sign leases with them in some of our buildings and we do management agreements with them as well. So we think wherever we can work a Convene into our projects it’s a great amenity—one that tenants will respond positively to.

Work space as a service has become huge business with players like WeWork, IWG (Regus) and Convene. Are you afraid that they will take business from traditional landlords?

So for our office business primarily we are in the big-bulk leasing business. So we don’t have a lot of small tenants in our facilities… And for sure the smaller tenants I think—particularly those in a start-up business—need flexibility and I think WeWork or IWG provides that flexibility for those tenants that don’t want to sign a 10-year lease because their business may be very different in a couple of years. I think there is room for both of these. And we are working with a coworking or flexible angle within many of our projects around the world.

Although they have been unsuccessful so far, why has Brookfield made moves to acquire GGP, Forest City Realty and IWG?

So I can’t comment on specific transactions. But I would say [Brookfield Property Partners parent company] Brookfield Asset Management’s real estate business has about $150 billion of assets under management and we got to that scale through [mergers and acquisitions] activity. So we are always looking for mispriced or undervalued opportunities—opportunities where we think either through a better capital structure or because of our operating capabilities or some idea that we have or some synergies with some or our other businesses, we can acquire a business and create value. And I’d say, in all of those transactions that is what we are really focused on. As for the specific ones that you mentioned, we will see.