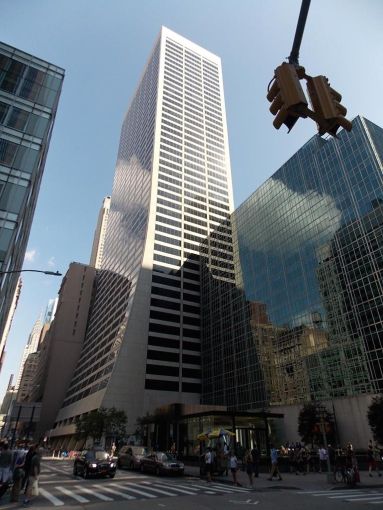 The Grace Building at 1114 Avenue of the Americas. Photo: PropertyShark

Bank of America is upping its presence in the area surrounding Bryant Park in Midtown after reportedly agreeing to take 127,000 square feet of office space at the Grace Building at 1114 Avenue of the Americas.

According to The Real Deal, the Charlotte, N.C.-based financial services giant inked a 20-year lease for the fifth through seventh floors at the 49-story, 1.5-million-square-foot office tower on West 42nd Street between Fifth Avenue and Avenue of the Americas.

Starting rent in the Grace Building deal was reportedly in the high $70s per square foot per CompStak data, according to TRD. CBRE handles leasing at the building on behalf of landlords Brookfield Property Partners and the Swig Company, while a CBRE team of Robert Alexander, Emily Jones, Ryan Alexander, Ramneek Rikhy and Chris Hogan represented Bank of America in the transaction.

And in December, Bank of America agreed a 386,000-square-foot lease to occupy the entirety of Brookfield and Swig’s 1100 Avenue of the Americas, the 15-story office building directly adjacent to the Grace Building that served as cable television network HBO’s longtime headquarters. HBO will vacate the property next year and move to 30 Hudson Yards alongside parent company Time Warner.

With the recent deals at 1100 and 1114 Avenue of the Americas, Bank of America reportedly plans to consolidate other Midtown offices—including locations at Rockefeller Center and the GM Building at 767 Fifth Avenue—into its expanded, campus-like footprint surrounding Bryant Park.

“This is an exciting opportunity for us to bring the team in New York City closer together and nearer to our One Bryant Park location,” a Bank of America spokeswoman said in a statement to Commercial Observer. “It will create a more integrated campus in Midtown Manhattan and provide opportunity for greater collaboration across all areas of the bank.”