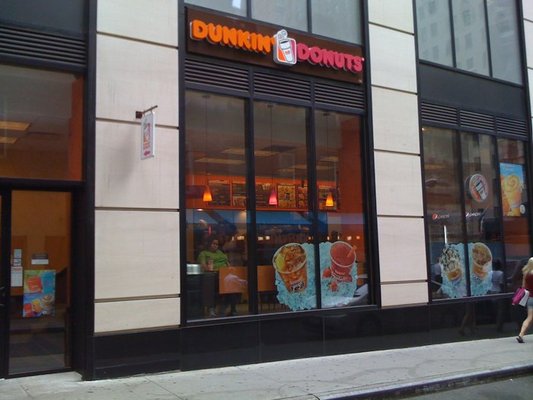 While New York City has seen slow growth in retail chains, Dunkin' Donuts still has the most stores of any chain in the city with 568 outposts. billygray

New York City has seen a slowdown in the growth of national chain retailers, according to the Center for an Urban Future’s eighth annual “State of the Chains” study released today.

“While this is the seventh consecutive year with a net increase in national chain stores in the five boroughs, this year’s rate of growth was lower than all previous [seven] years except 2013—when the number of chain stores rose by 0.5 percent,” the report says.

“Chain stores are continuing to expand in New York, but most of the growth is now occurring in the boroughs, not Manhattan,” Jonathan Bowles, the executive director of the Center for an Urban Future, said in an email to Commercial Observer. “Maybe Manhattan is getting near the point of saturation. Or at least some neighborhoods in Manhattan. And that is limiting growth.”

As CO has previously reported, retailers have been struggling to keep up with New York City’s escalating rents, in Manhattan in particular. Well-known tenants such as Toys “R” Us and Danny Meyer’s Union Square Cafe were forced to close due to rent increases (Mr. Meyer did find an alternate home for his eatery at 235 Park Avenue South, but Toys “R” Us is still homeless.) To draw retailers, landlords around the city have been reducing rents.

As for which chain dominates in New York City, the Big Apple is still running on Dunkin’ Donuts.

The national coffee and doughnuts retailer retained its title for the eighth year in a row with the most stores of any chain in New York City with 568 outposts, according to the Center for an Urban Future’s study, which covers 7,550 stores in New York City. And Dunkin’ Donuts is growing faster than before.

Dunkin’ Donuts added 32 stores from last year, with the majority of the new stores in Brooklyn and Queens. Last year the chain added just 21 new stores.

When it came to Manhattan alone, Starbucks Coffee reigned supreme once again. Of its 307 stores in New York City, the coffee giant has 220 locations in Manhattan (versus 205 stores last year in the borough alone). Dunkin’ Donuts, meanwhile, has 149 stores in the borough. But even coffee behemoth Starbucks is getting creamed by New York City rents, as CO reported, and some landlords are choosing artisanal and boutique coffee shops as tenants over the Seattle-based chain.

Some retailers have been expanding rapidly in the five boroughs, including mobile phone service provider Sprint, which grew to 70 locations from just 28 in 2014 due to absorbing 1,435 RadioShack stores nationwide. MetroPCS, another mobile phone service provider, was also big winner this year as it ballooned from 290 locations in 2014 to 323 stores.

In the loser column, McDonald’s shed some weight, losing 11 of its 243 locations.

And RadioShack, which filed for bankruptcy earlier this year and agreed to sell or close its 4,000 locations nationwide, dropped from 113 locations to just 37 in the city.

At least five national retailers shut down all of their New York City locations this past year including Baja Fresh, Ecko Unltd., Frederick’s of Hollywood, Montblanc and Underground by Journeys.