Landlords Have Gotten the Message: The Rent Is So Damn High That They’re Reducing It 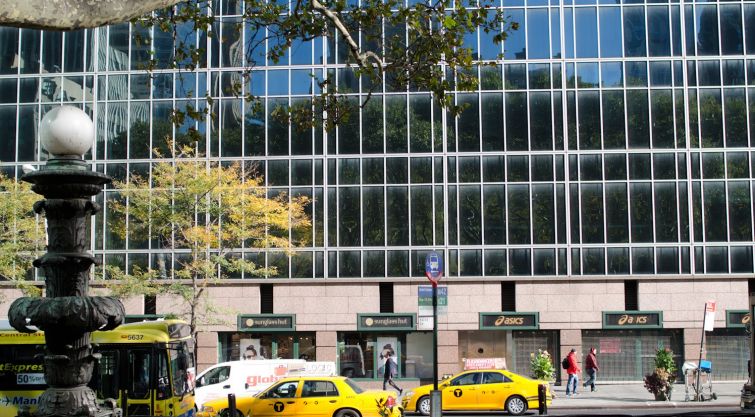 BACK FROM THE BRINK: Newmark Grubb Knight Frank emailed a “call for new rent” at 51 West 42nd Street, or, “just a fancy way of asking for offers whilst trying not to look desperate" (Photo: Molly Stromoski/ for Commercial Observer). Lauren Elkies Schram

The question has long been asked, when will the bottom fall out on retail rents?

The answer appears to be now.

Landlords throughout the city are cutting asking prices to make their properties more palatable to tenants—and this is before the rent decreases 10 to 15 percent below the asking price in the negotiation process. Brokers report being inundated with messages from colleagues notifying them that their landlord clients are decreasing asking retail rents $25 per square foot here, or $1,000 per month there.

“We’ve definitely hit a market top,” said one broker who asked to remain anonymous. “We’re getting emails from people—rent reduced, back on the market, this kind of stuff. I get 400 flyers a day.”

“I would concur with that for sure,” said Patrick Breslin, an executive managing director at Colliers International.

To Mr. Breslin it’s a matter of supply and demand.

Excluding the parts of Manhattan where there is little availability like Fifth Avenue north of Saks Fifth Avenue, Columbus Circle, the Flatiron District and Ladies Mile, supply appears to have exceeded demand. Soho, for example, is riddled with vacancies. As Commercial Observer previously reported, Lee & Associates NYC’s internal listings database showed 96 stores that were either vacant or available for lease from Canal to Houston Street, and Thompson Street to Broadway, on a given week in August.

“My evaluation is that some of these locations where this is happening are in areas where there are several availabilities presently and in order to secure and focus the attention of the broker [and] retailer to a specific property and highlight their spaces this is a marketing tool to bring interest to that specific store and to stand out in a market that simply has ‘too many’ options in the corridor,” Ms. Consolo said. “I do think this is working and more offers and deals will get made before year’s end. Some of these may have been priced too aggressively to begin with and like the stock market this is just a correction.”

At 664 Avenue of the Americas between West 20th and West 21st Streets, Lee & Associates NYC emailed about a price adjustment for a 1,400-square-foot second-floor retail walk-up space. The asking rent was dropped from $8,750 per month to $7,750 per month. Cushman & Wakefield issued a notice that there is new pricing at a retail space at 577 Broadway between Prince and West Houston Streets in Soho.

The asking rent for a 2,084-square-foot, ground-floor corner retail space at 100 Hudson Street at Leonard Street in Tribeca has been reduced to $150 per square foot, or $312,600 annually. The previous rent was $175 per foot, or $364,700 annually, according to Sarah Cassell of Chodosh Realty Services, who is co-marketing the space at the bottom of a residential cooperative.

“The asking rent was lowered because of the response to our marketing efforts,” Ms. Cassell said. “We tried a more aggressive price for a couple of months, and it became apparent that we would not reach the numbers we had hoped for, so we reduced the asking rent appropriately. We have been deluged with coffee and food inquiries but the owners have decided to seek only high-end dry use tenancies. The price was dropped to be more in line with those uses.”

Newmark Grubb Knight Frank has issued a “call for new rent” at 51 West 42nd Street between Avenue of the Americas and Fifth Avenue. The brokerage is marketing 1,732 square feet on the ground floor and 420 square feet on the mezzanine. The broker who requested anonymity said the call for new pricing was “just a fancy way of asking for offers whilst trying not to look desperate.”

“We’re looking at the potential rise in interest rates,” the source said. “European retailers are pulling back I think.”

“European retailers open here and there,” he said. “There’s not a lot of them pushing into the city as in the past.”

James Famularo, who is in the retail leasing division at Eastern Consolidated, said he is seeing landlords being more amenable to price reductions. He described them as being “in deal-making mode.”

“If I bring it to market and I am not getting offers, I request a reduction and get a
‘yes,’ ” Mr. Famularo said. “Some guys are really geared up for deals.”

Richard Kave, a managing director at Lee & Associates NYC, said asking rents have been rising at a fast clip over the last couple of years. And rent reductions, at least in some areas, are a result of landlords overreaching at the outset.

‘If I bring it to market and I am not getting offers, I request a reduction and get a “yes.” ’—James Famularo, Eastern Consolidated

A case in point, he said, is 125th Street in Harlem where rent increases are based on expectations of future retail.

“I think there’s a lot of promise of things coming,” Mr. Kave said. “Whole Foods is under construction. A lot of big-box retailers are taking space that will do a lot to transform the neighborhood. I think some of the asking rents are approaching $200 a foot, and they are just not justified by the volume retailers can do.”

If rents are too high, properties linger and existing tenants may struggle to pay their rent.

“There has to be an adjustment in the rents because I think it’s finally catching up,” Alexander Hill, the founder and managing principal of AHA Real Estate Group, said. Retail isn’t doing so well across the board. I think…tenants are going to start to be behind on the rent.”

Peter Braus, a managing principal at Lee & Associates NYC, described the situation as less than dire.

“I would say that rent growth on the retail side is stagnant,” Mr. Braus said. “And in cases where space isn’t priced properly in the first place, an adjustment is needed. I have two agencies—785 Lexington Avenue and 78 West Third Street—where we got multiple offers and are at lease at a 10 to 15 percent discount to ask. I think that’s a healthy and normal spread.”

The rent situation is a response to market conditions as online retailers divert business away from the brick-and-mortar shops. And as the end of the year approaches, landlords could be more eager to lease their space.

“At some point rents peak and vacancies go up and that’s about where we are today,” said John Brod, a partner at ABS Partners Real Estate. “It’s also the end of the year and if space isn’t leased in the next 30 days there’s a high degree of probability that that same space vacant by the end of the year will remain so through the spring if not longer. It should also be noted that it’s not so easy to lease space today as it was last year and the only way deals are getting done is by landlords getting creative and very realistic.”