Tenants such as the social media app and Touro College are leading the way, along with helpings of hotels and optimism 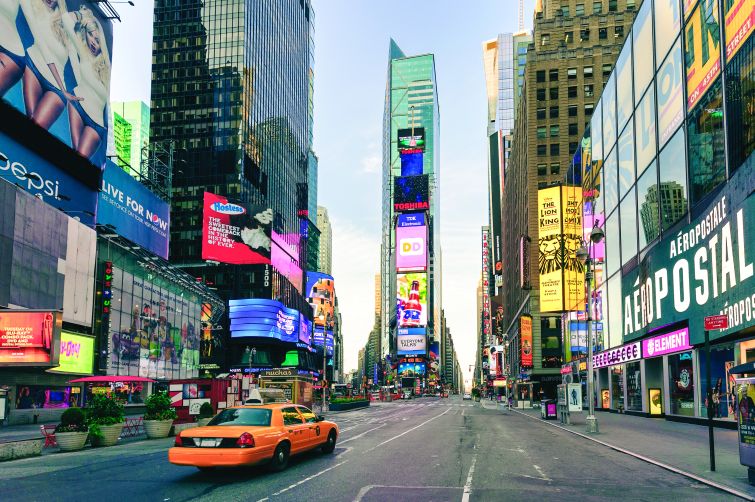 Within a Times Square that is mostly occupied, but pockmarked with retail vacancy, there’s a particularly conspicuous vacuum at Seventh Avenue and West 47th Street.

The Marriott Edition hotel at 701 Seventh Avenue, also known as 20 Times Square, is arguably the most exciting addition in many years to the area around where Seventh Avenue intersects with Broadway. But, even though the Ian Schrager-designed hotel is open, the project has been nothing but a nightmare for its owners. It was developed by a partnership that included New York real estate mogul Steven Witkoff, though the French bank Natixis, primary lender to owner Maefield Development, recently took control of the hotel by way of foreclosure.

Promotional material for Madonna’s 14th album “Madame X” — including the repeated phrase “Madame X is here to disturb the peace” — covers its retail portion. The album came out three years ago. According to a July 2020 Commercial Observer article, the unrented retail space is 60,000 square feet, large enough to house a moderate-sized supermarket. A “poorly conceived” NFL Experience attraction closed there in 2019.

This is but one of the empty spaces that crystallize the dilemma facing the Crossroads of the World, the evolution it faces for the first time since its last revitalization in the 1990s. Flagship office tenants have either left or are leaving, its retail occupants come and go, and while it’s no longer overrun by drug dealers and sex workers, the costumed cartoon characters and the “desnudas,” the nearly naked women who charge for posing for pictures with them, make for a challenging environment going forward. The challenge comes as Times Square competes with other, more sedate Midtown areas like Rockefeller Center and the newer and enticing Hudson Yards.

“I’m the eternal optimist,” said Tom Harris, president of the Times Square Alliance, the area’s business improvement organization. “The best is ahead of us. I have a lot of faith in the Adams administration. I see a lot of encouragement to support my optimism — the five hotels that are opening, the renewed interest in leasing spaces in Times Square — these are all good, positive things.”

Regarding the empty retail portion of the Edition project, he said, “It’s a really phenomenal space.” He noted its location across the street from Duffy Square, a square within Times Square best known for the TKTS booth that sells discounted Broadway tickets. “I think there’s really great potential in that space,” Harris said.

Natixis has brought in SL Green Realty Corp. to manage the property, including taking up its retail space as a cause. A spokesman for the real estate investment trust, one of the largest commercial landlords in the city, said last month it is too early for it to reveal a strategy for the space. Follow-up calls were not returned.

Flagship office tenants like magazine publisher Condé Nast, top-tier accounting firm EY, formerly known as Ernst & Young, and prestigious corporate law firm Skadden Arps, that moved in during that first revitalization in the 1990s, are being replaced by new, more offbeat occupants such as TikTok; Roku, the makers of a device that allows your television to connect with a variety of streaming services; and Touro College. There are also five hotels in various stages of construction in Times Square: the TSX hotel at West 46th Street and Broadway, the RIU Plaza on West 47th Street, the Marriott Residence on West 46th Street, the Hard Rock on West 48th Street and the Hilton on West 48th Street. And the Jimmy Buffett-themed Margaritaville Hotel at West 41st Street and Seventh Avenue recently opened.

No one knows yet whether Times Square is changing for the better or the worse, but brokers being brokers and developers being developers, the folks behind it say its best days are ahead.

“Over a long period of time any project is going to go through some economic changes,” said Paul Whalen, a partner at Robert A.M. Stern Architects and a creator of the design principles used by the 42nd Street Development Project, a city-state agency that guided the area’s changes in the 1990s. “We know that retail in New York right now is going through a difficult time. New York goes through economic fluctuations up and down. The important thing to us is to make sure that through those ups and downs, that it remains as close as possible to its principles.”

The trick is to keep Times Square’s weirdness while pushing forward through all the economic headwinds that might knock it sideways, or turn it sterile and too corporate. In other words, to keep the flashing in-your-face signage and the street performers, especially now that everyone has a smartphone camera. Just don’t let that sort of thing run amok.

Last year, the New York City Council passed a law restricting costumed characters and the like to certain zones within the town square, which in actuality is shaped more like a bow tie.

That was then. Now, a new generation of attractions and properties have redefined things: high-definition electronic signs; four new office towers that were compared to “elephant legs” in importance (in this analogy, Times Square is the elephant); retail that includes or has included Planet Hollywood, the Hard Rock Café, Bubba Gump Shrimp Co., the Toys ‘R’ Us flagship (now gone) that boasted a lifesize dinosaur and an indoor Ferris wheel; and stores that feature M&M candies, Hershey’s chocolate and Krispy Kreme donuts.

New York, despite COVID-19, remained the nation’s top tourist destination in 2021. NYC & Co, the city’s tourism and promotion company, estimated that the city drew 34.6 million visitors in the year just past. Times Square was by far the most visited attraction in the U.S., with more than 244,000 visitors per day in December, exceeding even the pre-pandemic averages for Disneyworld (57,148), Disneyland (53,172) and the Golden Gate Bridge (41,095).

However, Times Square tourism was still off by just over 33 percent compared to its pre-pandemic 2019 average of 365,000, according to the Times Square Alliance.

The average asking rent for retail space in the district fell last year below $1,000 per square foot, to $998 per square foot, for the first time in more than a decade, too, the Real Estate Board of New York reported. That’s a 39 percent decline year over year.

According to data supplied by the alliance, only about 23 percent of Times Square businesses were open in May 2020. At the end of December 2021, the share was up to 78 percent, and the alliance was anticipating that 18 new businesses would open in the next few months.

In the police precinct that includes Times Square as well as the areas around Grand Central Terminal and Penn Station, plus Koreatown, serious crime — murder, rape, robbery, felonious assault, burglary and grand larceny — was up 56 percent this year through March 13, compared to last year, according to New York Police Department statistics. But compared to 1990, there is no comparison. There were 41 reported rapes in 1990. There were 19 last year (up from 12 in 2001). There were 4,227 robberies in 1990. There were 427 last year.

Still, some look at the crime statistics and see things trending in the wrong direction. Foot traffic “has been struggling,” Adelaide Polsinelli, an investment sales broker with Compass, said in February. “You got no law and order. You got no one there. The workforce isn’t there. They’re fearful for a lot of reasons. This morning I saw a woman getting clobbered over the head in the subway. If you’re coming from the suburbs, your nice quaint town, you come into Penn Station or 42nd Street, and you see the vagrants and the thugs, and there’s no consequence.”

Still, a new generation of office tenants is far from being scared off. Three Times Square is one of those “elephant leg” towers built to presage the revitalization. Family ownership firm Rudin Management co-owns and developed the building along with primary user Thomson Reuters, the business information company. Thomson Reuters has been downsizing its presence in the building, selling off a division, and the building no longer carries the company’s name, said William Rudin, the landlord’s co-chairman and CEO.

But for Touro College, which in January rented 243,000 square feet at the bottom of the tower, the school’s feeling was that it was fortunate to find such quality space in the middle of Manhattan, with its high ceilings and few interior columns, conducive to classrooms, with its own entrance on West 43rd Street.

“It was like, holy cow! The building had almost everything,” said Jeffrey Rosengarten, Touro’s operations chief. “Nothing is perfect, but it was as close to perfect as we could have wished for.”

Even with Touro, the building is being marketed to an anchor who would put its name on it, Rudin said

At 5 Times Square, which has gone through several owners and is now owned by Long Island-based RXR, longtime tenant EY, which is moving to the Hudson Yards area, is being at least partially replaced by Roku.

At the Durst Organization’s 4 Times Square, now known as One Five One, and the beneficiary of a $150 million makeover, Condé Nast moved to 1 World Trade Center and Skadden Arps decided to move to Hudson Yards. The new anchor, with 232,000 square feet, is TikTok, the social media company that specializes in smartphone-ready videos, and the Venable law firm also took 158,000 square feet.

Across from the Edition is rising TSX, a 48-story, mixed-use tower that is to include a 669-key hotel, an indoor-outdoor performance stage, the lifting of the previously below-grade Palace Theater, where Judy Garland gave a now-legendary performance, 100,000 square feet of retail and entertainment, a food and beverage terrace, and an LED signage program. The $2.5 billion-plus project is the work of L&L Holding Company, the firm behind the new 425 Park Avenue and 390 Madison Avenue office projects, in a collaboration with the Fortress Investment Group.

“Every part of the city goes through a rebirth,” he said. “It’s the city reinventing itself. We have Touro, across the street you have Roku; Schrodinger, which is a technology bioscience firm; you have the re-renting of the Durst building. You’re now seeing a significant activity level: education, technology, media. It’s all part of the ebb and flow of New York real estate.”

Asked about the transition from classic high-credit tenants like EY, Condé Nast, Skadden and Thomson Reuters to trendier companies like Roku and TikTok, Rudin would have none of it. He pointed out that Times Square was the place that witnessed the crash and burn of Lehman Brothers back in 2008, triggering the great financial crisis.

“They send a very strong message to the market that Times Square remains a strong business center,” Rudin said of the new tenants. “There have been law firms that have gone out of business. Things happen. I don’t think you read anything into a company moving to another location and taking space. Some of the great names in finance have gone out of business — Salomon Brothers, EF Hutton. That makes great opportunities for other companies.”