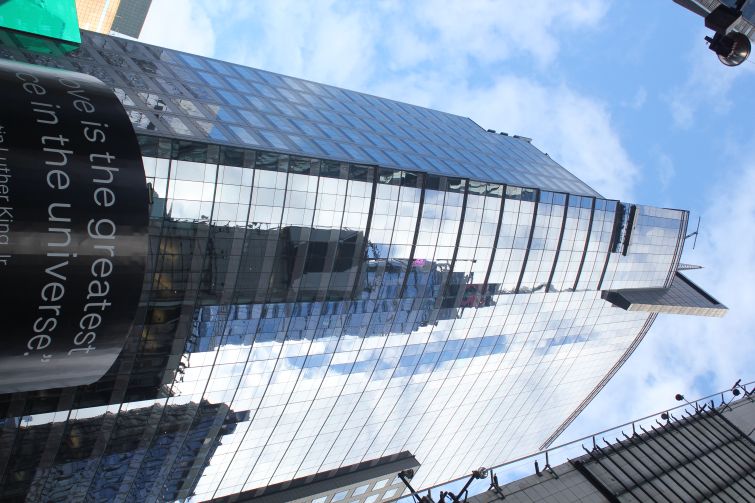 Arguably the most counterintuitive new lease to make the news in New York recently was Touro College’s 243,000 square feet at Rudin Management’s 3 Times Square, also known as the Thomson Reuters Building after the original anchor tenant. Institutions of higher learning are decidedly not what you think of when you think of the Crossroads of the World, which had gone to seed a generation ago, but was saved by a massive revitalization push that made it family-friendly.

What you are more likely to think of these days are costumed cartoon characters or nearly naked people, both trying to hustle you to take photos with them in return for money. Or tourists. Lots of tourists.

But once you are in the building at 3 Times Square, the Touro lease makes a lot more sense. It is one of four skyscrapers built as the anchors of the new Times Square, around the turn of the century, so they reflect what was state-of-the-art at the time, including as few columns as you can get away with and ceilings that don’t induce claustrophobia. To hear Jeffrey Rosengarten, Touro’s senior vice president of operations and the one person besides school president Alan Kadish most responsible for the lease, tell it, those are things that folks focused on operating classrooms prize.

Bernard Lander, a rabbi and a social scientist, founded Touro College in 1970, naming it for Isaac and Judah Touro, a father and son who were leaders of the Jewish community in colonial and post-independence America. While most colleges and universities are built around a specific campus, the culture at Touro is to go to the students rather than have the students come to it. Touro has a dual mission, to serve both Jews and to provide higher education to all. It sees itself as a national leader in teaching healthcare disciplines.

It has two teaching facilities in Brooklyn, one on 60th Street between 10th and 11th Avenues, and one in Islip, Long Island, as well as a campus in Los Angeles. Roughly 2,000 of the school’s 19,000 students are expected to take their classes in the Times Square facility, according to Rosengarten.

Rosengarten recently answered a bunch of Commercial Observer questions about the lease. His responses have been edited for length and clarity. Also, Rosengarten declined to discuss the financials of the deal. A leasing broker who asked not to be identified, though, said that Touro is paying $42 a square foot in rent with $5 a foot bumps every five years as well as a $150-per-square-foot work allowance, and is getting 17 months of free rent. The lease is a long one, with a term of 30 years.

So how did a school like yours become interested in, and ultimately do a lease in, Times Square, with all the things that Times Square is known for?

Jeffrey Rosengarten: It’s kind of a long story. I came to Touro about seven years ago [from Yeshiva University], so I’ve been doing stuff like this in real estate construction and operations for quite a number of years. When I came to Touro, Mr. Kadish, who is key to the story, in my first meeting with him, said we have to find an appropriate place for our main headquarters and school in Manhattan.

What I learned from that is that the school had been trying to find an appropriate location. Even though we are called Touro College, it’s actually Touro College and University System. What I learned from him is what the factors were, and those factors made it an almost impossible dream. We were looking, first of all, for a fairly large amount of space. When I started, the number was around 300,000 square feet. The number has changed over time, but that’s a big piece of space. So that was number one.

Number two is that it was important that the school be somewhere in the Midtown Manhattan area, and that has to do with transportation, where our students and faculty were coming from, and it remains seven years later also very important. And because we’re a school with active classes, we needed a building that has large floorplates, 30,000 square feet-plus. We needed a building that had high ceilings, as high as possible, 12 feet or better, because big classrooms and lecture rooms and libraries don’t do well with office-type ceilings. We needed a building that had few or no columns because columns make terrible lecture rooms. And we needed lower floors of the building because college and university students prefer to be able to walk up.

We were looking for a building with a separate and distinct lobby and entrance for our school, so that we could have a building within a building. And I’ll just throw one more in — though there is really an unending list — we needed sufficient elevators, because we have changes in classes that occur every couple of hours, where you have a huge rush to get to the next place, which often is on a different floor. Business buildings have their rush hours at, I don’t know, 8:30 to 9:30 and maybe 5 to 6 at night; we have our rush hours at 10 different times during the day.

It was really an impossible dream to find a space that would do it all.

Three Times Square checked the boxes on each of those items. Because it’s fairly new, it had fewer columns, large floorplates, well-elevatored generally.

It was like, holy cow! The building had almost everything. When I first visited it, it was right before the pandemic. That’s how we count our lives now, right? It was only a few blocks from where my office was; at the time we were on 37th and Seventh. When I first looked, I said, ‘Gee, there’s some real potential here.’

I’m old enough to have been through many iterations of Times Square, from the seedy to the real high-tech and professional. Three Times Square really gave off a far different vibe. It checked the box in terms of transportation, even the Port Authority [Bus Terminal] which is around the corner. We had people coming in from areas of upstate New York, etc. It was just what we were looking for.

Nothing is perfect, but it was as close to perfect as we could have wished for.

Do you see the deal you did at 3 Times Square as a pioneering thing? You will be in the same milieu as the costumed characters and the tourists, etc?

To a certain extent, I think Touro did break new ground. I don’t know how radical an idea it is. Columbia University, aside from not too many tourists, is not exactly in a beautiful, sedate, peaceful neighborhood, and yet it serves them well. The Village area where NYU found itself wasn’t always the high-priced and in-demand area that it is today, and I think they had visions when they invested heavily in it.

Going back many, many years, that wasn’t your prototype that an educational institution might want to find itself.

I think that Times Square, especially this location, is a good location. There are no options in Midtown Manhattan to build a sprawling campus with columns and with space between buildings. Unless you take over Rockefeller Center.

How much is it going to cost the school to take over this space and where does the money come from?

I’m a firm believer that there’s never a deal that doesn’t work well for both parties. I must say that the Rudins have been high-end professionals in the real estate business, but also very good people.

This deal came to fruition about a week before the Jewish High Holy Days. That same day, [Rudin Management CEO and co-Chairman] Bill Rudin and others of his firm reached out directly to President Kadish to basically say “Mazel Tov and happy new year.” It was how people who are mensches operate. They’ve been mentsches throughout.

I understand you not wanting to discuss the college’s finances, but did you have to raise the budget for the project significantly by going into Times Square?

The simple and truthful answer is no we didn’t raise the budget. Frankly, the other possibilities on the list would have cost the same or more. This was well within what other locales would have cost. We’ve been looking in some very in-demand areas of New York City. Whether it’s in Penn Station, whether it’s Times Square, or other areas in between. Our model is based on a student body that wants to be in certain places.