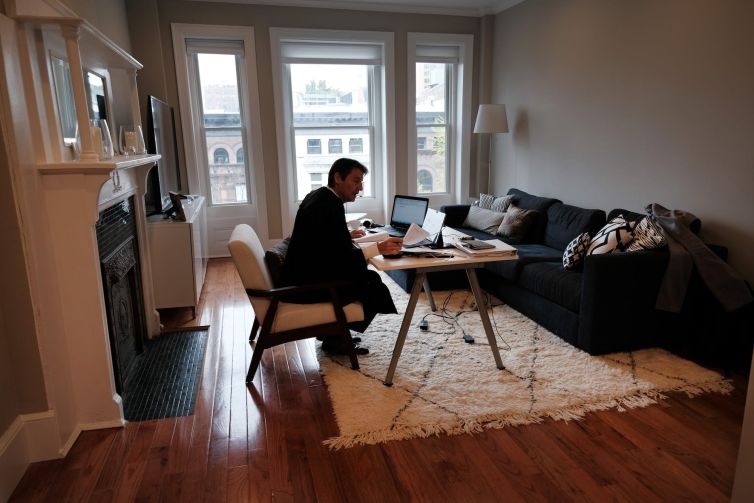 New York City Criminal Court Judge Paul McDonnell works remotely from his Brooklyn apartment due to the coronavirus outbreak. Judge McDonnell, who usually presides over cases in a Manhattan court room, has had to alter his work routine by hearing cases remotely due to the virus outbreak. photo: Spencer Platt/Getty Images

Just nine months ago, when much of the country was at home in the midst of the global pandemic, a survey showed 39 percent of U.S. companies considered seriously reducing their office footprint.

But now, with the country reopening for business, it’s a very different story. After a year of unprecedented uncertainty during the work-from-home phenomenon, a new study by CBRE shows the same number fell 30 percentage points, with just 9 percent of U.S. companies now anticipating that their office portfolios will get “significantly smaller” over the next three years.

“Multiple factors support this sentiment, including the ongoing rebound of the U.S. economy and companies’ realization that they need to retain more office space than they previously thought,” CBRE’s Julie Whelan said in a statement. “Many companies now recasting the design and function of their offices will find that the square footage needed to accommodate team-centric work, free-address seating and meeting space often exceeds that previously dedicated to rows of individual offices and cubicles.”

However, there’s a big caveat: While smaller companies are likely to maintain or expand their current portfolios, the number of large companies in the survey planning for modest reductions jumped to 72 percent, up from 45 percent in the September survey.

The country’s major urban markets have shown significant gains in the second quarter, even as heavyweight tenants enact hybrid work strategies with fewer days in the office. For example, American Express said this week that staff can work remotely two days per week; Apple wants its workers in the office just three days a week starting in September; Google will allow 20 percent of its staff to work remotely on a permanent basis; and Facebook is bringing employees back to its New York offices in July. The social media giant has indicated that it’s committed to its physical office space, even though it sees half of its staff working remotely in the next decade.

In the past month, Los Angeles has seen a surge in activity, with companies like Snap Inc. and Hulu either extending or expanding their current leases. And New York landlords are “cautiously optimistic” as the average lease length starting to grow after pandemic-driven retractions.

However, none of this is to suggest that things are going back to where they were in 2019. CBRE concluded that remote work is a fixture moving forward. About 32 percent of companies anticipate an equal mix of in-office and remote work; just 15 percent foresee solely in-office work; and 7 percent say workers will do most, if not all, of their work remotely. Additionally, more companies reported they intend to use more flex-office space.

This sea change translates into companies using 9 percent less office space per worker. CBRE says the impact on office demand will largely be offset by increased hiring amid the economic recovery in the coming years, but the same analysts forecast that the U.S. office market won’t start its recovery until mid-2022, with asking rents finally hitting pre-crisis levels in early 2025.