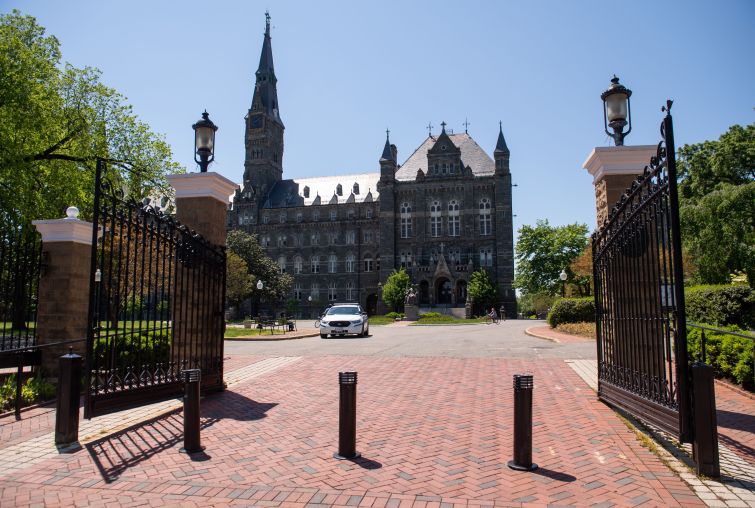 Dedicated off-campus housing around Georgetown University in D.C. was some of the most expensive this spring. Photo by SAUL LOEB/AFP via Getty Images

Call it another benefit of education.

Dedicated off-campus student housing is exiting the pandemic as a potentially more profitable, long-term commercial real estate asset than malls, hotels and offices. Part of that is what the pandemic did to those other assets.

Malls were already struggling with e-commerce when the pandemic slashed foot traffic to near zero and kept it there for months; hotels shuttered by the thousands amid plunges in tourism and business travel; and companies kept their employees out of the office for months.

Still, even with a post-COVID reopening for offices and malls — and a travel bounce for hotels — student housing appears to be a more sure bet for commercial real estate investors.

Net operating income in student housing is expected to grow nearly 2 percent after 2025 — or about the same as profitability in self-storage and senior housing — according to commercial real estate intelligence firm Green Street. For office, lodging and malls, the profitability growth projections are all 1.3 percent or less.

A larger part of this relative success is how student housing weathered the pandemic. It came in with a tailwind, but trends early on, particularly a decline in enrollment, suggested a dreadful run ahead. That didn’t necessarily happen.

“We were in an environment last year where, historically, pre-leasing pre-March of 2020 was exceeding previous years and was on track to have a very strong occupancy performance going into fall of 2020,” said Travis Prince, an executive managing director at Cushman & Wakefield, who heads its student housing capital markets team.

The pandemic, of course, slowed all of that. Schools nationwide sent students home in the spring and then didn’t bring them back in large numbers in the fall.

At the same time, though, COVID also renewed a demand for more spacious, off-campus digs. Most on-campus housing crams two or more students into a unit. The demand for more socially distanced setups, with doors to close between beds, drove construction starts.

In fact, the pandemic year 2020 closed with bedroom deliveries representing a similar share of the overall supply of student housing as 2019 — 2.4 percent then versus 2.2 percent in 2020 — according to Yardi Matrix. New construction accounted for .01 percent of supply year to date in 2021 as of May. Another analysis from Green Street has that share catching up with pre-pandemic projections by 2025.

As in the recent past, most of this new development in 2020 was concentrated in the South and the Southwest, particularly in Florida, Texas and Arizona. The University of Texas’ Austin flagship, for instance, led the Yardi Matrix pack with 1,057 units under construction as of April — or one-fifth of the market’s off-campus student housing.

Sales of these newer and other units remained decent during the pandemic, though the numbers had nothing on previous years. There were around $1.5 billion in total sales of dedicated student housing in 2020, with the average sales price per bed at $71,000, according to Yardi Matrix. That’s off from the nearly $2 billion traded in 2019, and the more than $3 billion sold in both 2018 and 2017. The price per bedroom, though, was comparable to 2019.

Also, rents have held steady, though not spectacularly so. Growth in 2021 was a positive 1.2 percent on an annual basis as of April. That was below the rent growth seen throughout 2019, and even much of 2020. Still, the rent growth in 2021 reversed a nearly year-long decline.

“The immediate impact of the pandemic created uncertainty throughout the multifamily market, but the student sector proved to be strong with a higher percentage of rent collections than traditional multifamily,” Griffin Cotter, senior director of multifamily production and sales at government-sponsored housing lender Freddie Mac, said.

His agency reported $196 million in student housing financing activity year to date as of late May — approaching the $236 million that Freddie Mac had loaned by the same time in 2020.

For all the green shoots, though, student housing’s immediate future as an investment remains blurry, though not quite as hazy as the outlooks for hotels dependent on business travel or for conventional offices. But there are variables.

Off-campus student housing is heavily dependent on enrollment, and it is unclear whether schools will return in full force in the fall. Many international students, for instance, may not be able to relocate to the U.S. in time for in-person classes.

Undergraduate enrollment was down 5.9 percent annually in spring 2020, according to data from the nonprofit National Student Clearinghouse Research Center. Pre-leasing for student housing for the fall was off, too, as of April, down 4.2 percent from last year, and nearly 6 percent from 2019, Yardi Matrix data showed.

Another variable for student housing is that many schools discovered a revenue stream in remote learning during COVID (as students themselves were forced to discover a felicity with remote learning tools). Schools can reach many more students via Zoom et al., and those students often pay less for the same lessons that in-person pupils get. HolonIQ, a firm that analyzes the education industry, predicts the online degree market is on its way to doubling to $74 billion from 2019 to 2025.

Finally, student housing is a woolly industry that’s still very much evolving, with fundamentals like rent being dependent on location and little else. It wasn’t until after the financial crisis of 2007-08 that it matured much beyond walk-up, garden-style apartments with surface parking that happened to be near a campus, C&W’s Prince said.

“There really was not a huge focus on location in the market,” he said. “The second generation of student housing was very, very focused on being as close to campus as possible.”

And, while location within a market matters then, so, too, does the market itself. Rents vary widely in student housing depending on which school the units revolve around. Rents — and the potential for investor-friendly rental growth — tend to be highest in areas with high housing costs in general.

Schools in Washington, D.C., Southern California and the San Francisco Bay Area topped Yardi Matrix’s April rundown of the priciest student housing. The average monthly rent per bed at the University of California-Berkeley was $3,518, for instance; at D.C.’s Georgetown, it was $2,585.

For all of the variables, however, student housing is projected to outperform other commercial real estate asset classes, such as office, lodging and malls, in the next few years. In fact, the real danger for student housing might be its very popularity.

Yardi Matrix’s data warns of oversupply in some markets, especially if enrollment doesn’t come back as quickly from the pandemic and remote learning proves durable. “Some universities with significant development pipelines may face absorption issues once those bedrooms are delivered.”