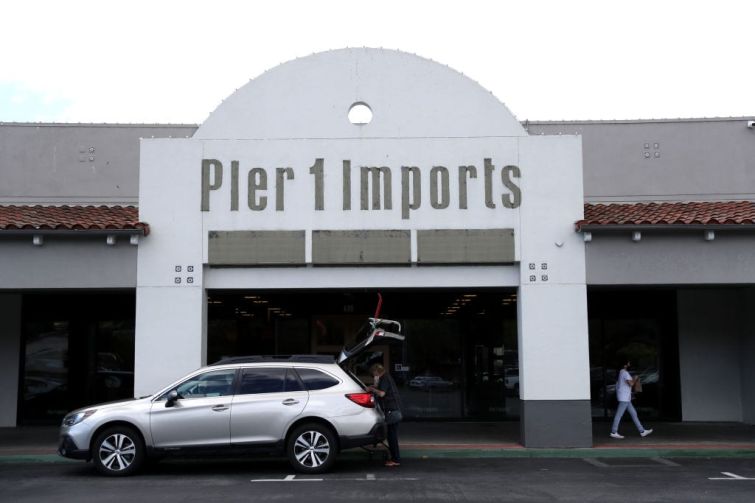 Pier 1 Imports announced it was going out of business in May and will permanently shutter its nearly 540 stores. Photo: Justin Sullivan/Getty Images

The total square-footage of retail store closures in the U.S. this year has already surpassed 2019’s total and is on pace to be the highest on record, according to CoStar Group data.

“I think it’s safe to say that the pandemic has been especially hard on retail,” Kevin Cody, a senior consultant at CoStar, said. “It was hit very swiftly due to the nature of the current recession where stores had to be shut down.

“Many stores have been shut down permanently, otherwise they’re typically under restrictions,” Cody added.

If the pace continues, the year could be the worst for store closings since 2018, which had a record of about 155 million square feet of store closures, Cody said. The pace of these announcements has started to slow this month, but Cody still expects the numbers to surpass the 2018 total.

More than 50 percent of the closures announced this year came from JCPenney, Macy’s, Stein Mart, Bed Bath & Beyond and Pier 1 Imports, according to CoStar. CoStar’s data only focuses on closings from major retailers, meaning that the total number “is likely far higher,” CoStar consultant Robin Trantham said.

Retail was already struggling before COVID-19 through what’s been dubbed a “retail apocalypse” due almost entirely to increased competition from online shopping. The pandemic exacerbated the problems as many stores were forced to temporarily shutter in mid-March as states tried to slow the spread of the virus.

March and April saw historic drops of retail sales around the country — which have started to pick up since — and dozens of retailers filed for bankruptcy in recent months, announcing hundreds of store closures in the process.

Malls will absorb almost half of these closures, mostly due to the tenant makeup within the complexes. Cody said he expects the value of mall-based retail, too, to decrease due to the pandemic.

“Malls are very highly concentrated in the apparel and other traditional retailers, which are very highly exposed to competition from e-commerce,” he said. “The pandemic has definitely accelerated that.”

By contrast, neighborhood retail centers — especially ones that grocery stores anchor — have faced far less pain during the pandemic along with higher-quality malls in good locations, Cody said. He also expects open-air centers to recover better because shoppers have been concerned about the health risks of shopping in indoor malls.

Discount shops and grocers — including Dollar Tree and Aldi — have been doing relatively well in recent months and announcing store openings, but it’s unlikely to help malls since these retailers don’t often target prime locations for new outposts, Cody said.

Experiential retail like movie theaters, fitness centers and restaurants — which some had pegged as a savior for malls pre-COVID-19 — haven’t fared well either during the pandemic, Cody said.

“I think we’re going to see a slowdown in that trend, perhaps a short-term reversal and some of those tenants going out of business,” he said. “Many of those tenants are struggling financially.”

With all this, Cody said it’s likely that some malls around the country will struggle and close, leaving them open to conversion to other uses.

“A lot of the lower-quality and poorly located retail is going to be struggling,” he said. “Those assets might be a good opportunity to convert to industrial, office and multifamily as well. That type of mixed-use strategy is something we’re strong believers in.”