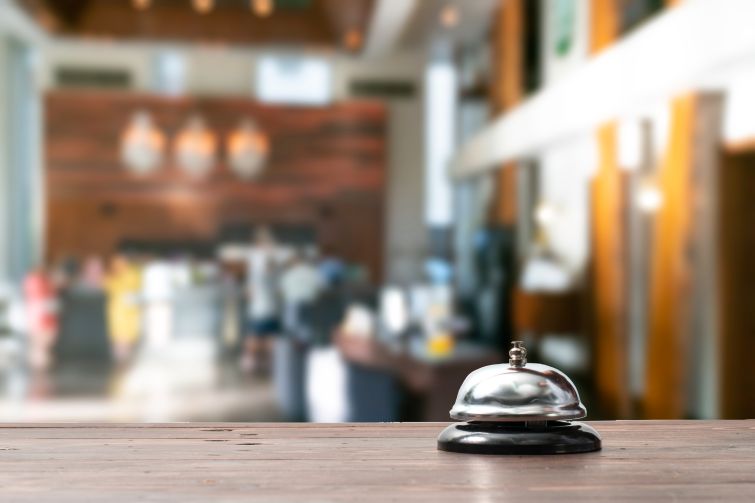 It’s the summer of revenge travel. And, if you don’t know what that is, don’t worry, neither did Expedia CEO Peter Kern.

Until he was asked about it during the company’s first-quarter earnings call last week. “I’m rooting for revenge travel, whatever that is,” Kern said in answer to the analyst, who was referring to Americans’ pent-up demand for getting the hell out of Dodge, in revenge of the virus? The masks? Boredom?

In any case, it’s the summer of finally seeing grandma, making that overdue trip to Disneyworld, springing for a fancy resort, or loading up the car and attempting a family road trip to, well, anywhere.

“America is going to party this summer,” said Barry Sternlicht, chairman and CEO of Starwood Property Trust, during the company’s earnings call last week. (He started to say, “party like 1929,” but caught himself, “’99, better not be 1929.”)

Both calls came amid an earnings week full of results from hospitality and travel companies, including hotel REITs and three of the major travel-booking companies: Booking.com, TripAdvisor and Expedia, which also owns vacation rental platform VRBO.

Although it came from many different angles, the results all pointed to a split recovery: while Americans are gearing up for a summer of domestic travel, all other travel categories — including corporate, international and group travel — are looking at a much longer recovery timeline.

Of course, he’s referring to future travel. Despite the tales of spring break debauchery in South Beach, travel hasn’t actually rebounded yet, though optimism that it will certainly has.

“[In] the last 90 days or so, from the time that the vaccines were announced, then the rollout of the vaccines, you had a belief that as a country we would recover very quickly,” said Adam Etra, co-head of Newmark’s hospitality capital investments team. “The sentiment was that medicine and science would prevail, and the return to normalcy would accelerate. That sentiment has picked up momentum.”

Expedia was one of the success stories, one of the few travel companies to exceed expectations — except that those expectations were extremely tempered. The company lost $606 million in the first quarter of 2021, not what you’d call a good quarter, except for the fact that it lost $1.3 billion this time last year. (The adjusted loss was $2.02 per share in the first quarter, versus $1.83 per share last year.)

And, even with tempered expectations, companies like Hyatt Hotels Corp. and Hilton underperformed. Hyatt lost $304 million, the most of any quarter yet, and its fifth consecutive quarter of losses. For context, in the third quarter of 2019, the last full one before COVID hit, the company earned $321 million.

At domestic resort properties, one of the best-performing sectors, occupancy was up to 70 percent in the final week of March, which coincided with the spring break period, Hyatt reported. Business travel, on the other hand, was at 19 percent of 2019 levels in March, though the company said it had climbed a bit in recent weeks.

“We feel the spring break period in the United States provides a preview of pent-up demand for travel,” Hyatt President and CEO Mark Hoplamazian said during the call. Grasping much?

Starwood’s Sternlicht was more emphatic about what spring break had to say about the future, with a focus on the prices that people were willing to pay for domestic travel. The hospitality sector had gone from red to yellow, in terms of how bad things were, and all the way to green if you look at certain subsectors, Sterlincht said. “It’s actually green. RevPAR is up,” he said. “Luxury is — if it’s a resort, it’s fantastic. People paid triple the rates to go to the Oman in Utah, or One Hotel here in South Beach, where I’m located, had a record first quarter.”

And it was far above what they expected, Sterlincht continued. “At $1,600 a night, we probably thought we’d get $800 a night. People have a lot of money. The nation is rich.”

It seems fairly obvious to point out that despite the stimulus money, and the well-heeled shoring up their savings during the year of boredom, many people have not fared, uh, great during this time. And even with the vaccine rollout, the U.S. unemployment rate ticked up in April, standing at 6.1 percent as of May 7, according to the U.S. Census Bureau. On the bright side, a good chunk of new jobs added last month (331,000) were in the leisure and hospitality sectors.

“While we expect domestic leisure travel to be the segment of our industry that recovers the fastest, a rebound is not inevitable,” Tori Emerson Barnes, executive vice president of public affairs and policy at the U.S. Travel Association, testified before Congress in April. “Low- to middle-income families have been hardest hit by the pandemic, and research shows they are less likely to travel in the next year” in comparison to high-income families. (That being said, Emerson Barnes was there to lobby for federal aid for the hotel and travel industries, so her aim was to convince Congress of the direness of the situation.)

Even within domestic travel, the party lines are split. The revelry is more likely to go down in places like South Beach or other coastal resorts than in city centers, since they are reliant on international tourism, large-scale events and business travel. “I don’t think a lot of people are headed to the Marriott Marquis in New York, but Virginia Beach, I mean — the numbers will be astronomical,” Sternlicht said.

Those trends are affecting the capital markets, too. “Investors are underwriting the recovery in the leisure segment very aggressively,” said Etra, who expects valuations to be back to pre-pandemic levels by next year. “And we’re already seeing countless hotels that will surpass pre-COVID levels during this summer.”

Booking.com, which fell short of projections, relies heavily on international travel and was, therefore, more muted in its optimism. European bookings make up 50 percent of its business, followed by 20 percent in Asia, and 30 percent in the U.S. and the rest of the world. “We continue to believe it will be years, not quarters, before we see a full recovery of the travel market, especially international travel,” Booking Holdings CFO David Goulden said during the company’s earnings call.

“While there are encouraging signs of recovery in some countries right now,” he said, “the current situation in other countries, such as India, where we are seeing staggering increases in COVID-19 cases and an enormous human tragedy happening, reminds us that recovery is not underway everywhere.”

Americans’ non-essential travel to Europe is still restricted, but the European Commission, the executive branch of the European Union, submitted a proposal that would allow vaccinated Americans to travel to its member states beginning in June. Which would benefit not only Booking, but the entire travel industry.

One thing to keep in mind is that Booking stopped its no-cancellation policy in early April and encouraged people to book before, meaning that its first-quarter bookings are less firm than they would be otherwise.

A final wrinkle is the short-term/extended stay/vacation rental sector, which has received plenty of attention during the pandemic — as Americans shifted to longer stays, more car travel and working from anywhere (though, perhaps because of hospitality’s tentative recovery, the supposed trend of converting dormant hotels to coworking hubs seems to have fizzled).

In addition to Airbnb’s successful initial public offering (IPO) last year, short-term rental startup Sonder recently announced that it would go public via a special acquisition company at a valuation of $2.5 billion. Many Sonder rivals went bust during the pandemic, which some might see as concerning, but Sonder co-founder and CEO Francis Davison sees that as an advantage. They’re the only ones left to take advantage of displacements in the hotel industry, he said during an investor presentation.

Sonder has 300 properties in 35 markets, and includes both apartment blocks within buildings as well as hotels where Sonder operates the full building. That includes Manhattan’s Flatiron Hotel, which faced foreclosure in recent years, and which Sonder opened just last month, while many longstanding New York City hotels remain closed.

Airbnb had a solid first quarter, exceeding expectations, while Expedia doesn’t break out VRBO numbers, so there isn’t too much visibility into that platofrm. While Kern the brand was growing, he also cautioned that some trends, such as longer stays, might be pandemic-specific.

That being said, Kern isn’t judging people for the travel they’re doing, or what they call it.

“Whatever kind of travel people want to do,” he said, “we’re happy to accommodate it, revenge or otherwise.”