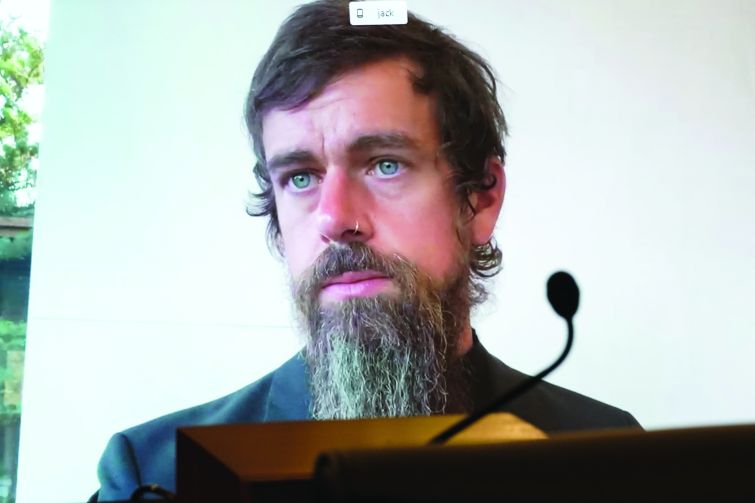 Twitter CEO Jack Dorsey has told his employees they can work from home indefinitely, while other big tech companies plan to return to the office in mid to late 2021. Photo: Greg Nash-Pool/Getty Images

While large finance tenants seem likely to be back in the office first, the real estate world is also eyeing when tech, advertising, media and information (TAMI) tenants will return to New York City office buildings after the pandemic.

Tech companies, in particular, have been responsible for some of the biggest leases signed during COVID, while much of the office market has come to a relative standstill.

Facebook, for example, signed on for 730,000 square feet of office space at Vornado Realty Trust’s redeveloped Farley Post Office next to Penn Station in August. That came in addition to its existing 1.5 million-square-foot office space at the Related Companies’ Hudson Yards, which is still under construction. Apple expanded its existing 220,000-square-foot spot at Vornado’s 11 Penn Plaza to 336,000 in November. There was also TikTok’s blockbuster 232,000-square-foot lease at the Durst Organization’s One Five One in May.

Yet, Facebook, Google and Slack have all promised their employees that they could work from home through at least the summer of 2021. Apple CEO Tim Cook has said that early 2021 is the earliest employees would return. Then, there’s Twitter CEO Jack Dorsey, who told employees in May that those who can work remotely are allowed to do so indefinitely if they prefer. The company has leased more than 215,000 square feet on West 17th Street since 2014.

This dichotomy of both powering the New York office leasing market in its darkest days and hedging on when, if ever, they might return fully to their desks has made tech firms the great commercial real estate question mark of COVID. The effects of their decisions, beginning with whether to sublease existing space, would reverberate.

Twitter has subleased thousands of square feet at its West 17th Street location to other companies, including Lyft and Netflix, due to growth challenges, but office brokers say such a trend is unlikely to catch among other big tech tenants. That’s because, the brokers argue, such firms plot real estate strategy years in advance. But, for many TAMI tenants, a return to in-person work ultimately depends on when a coronavirus vaccine can be distributed widely enough that employees feel safe coming back to offices.

“They’re waiting for the vaccine to be distributed, and then they say, ‘What are we? Do we need less space, more space?’” said David Falk, president of Newmark’s tri-state region. “I think it’s all vaccine-related.”

Perhaps the bigger question is what tech and media tenants are doing with their office space in the meantime, and the effects that that might have on an overall office market already reeling from COVID. At small- to medium-sized tech companies, executives have increasingly decided to follow Twitter’s lead and put their space on the sublease market.

“If they have a lease that’s five years or longer, they’re willing to sublease for 18 to 24 months and even take a loss,” said Cushman & Wakefield office broker Sebastian Infante, who represents mid-sized, venture capital-backed tech firms. “They want to buy themselves some time. They know they will eventually come back to the city.”

He added that the firms he represents — which usually employ 25 to 200 people — “typically don’t like to spend a lot of money on their office space. All of that leads to jamming as many bodies as possible into a small space. They have about 130 to 150 square feet per person, with 4-foot desks, which is pretty tight. You’ll see those numbers increase to 175 square feet a person” because of social distancing recommendations, he said.

But, some sectors of the tech industry are doing well, and even expanding. Health tech and insurance tech startups are hunting for more office space, Infante noted, and companies related to online shopping are growing as well. He recently closed a 30,000-square-foot deal with one such tenant in Penn Plaza, he said, and is looking for a 20,000-square-foot space for a data analytics company.

The Manhattan sublease market reached a record 16 million vacant square feet in the third quarter of this year, which was the highest level in 17 years, according to Cushman & Wakefield’s latest market report. And TAMI tenants are driving it: they account for about 55 percent of all available sublease space right now. Omnicom Group, R/GA, McGraw-Hill, Zillow and WPP all put 100,000 square feet or more of sublease space on the market in the third quarter, recent data from Savills showed.

And, the sublease market is offering bargain basement rents, which are, in turn, dragging down direct asking rents throughout Manhattan. Infante said he was seeing lower asking rents for sublease space than he’d seen at any other time in his career. The broker reported seeing $40-per-foot asking rents to sublease in properties in TAMI-dominated Midtown South, where rents had been $60 to $80 a foot pre-pandemic. Average asking rents on the Manhattan sublease market are around $62 a square foot, according to JLL.

Overall asking rents in Manhattan declined 3 percent last quarter, according to both Colliers’ and JLL’s market reports, in the largest quarterly decrease since 2009.

“The sublease market is going to be worse than it was during the global financial crisis,” said Mark Grinis, Ernst & Young’s global real estate practice leader. “It’s going to hit levels we’ve never seen before.”

Whether TAMI tenants decide to expand or contract in this environment will depend on what their employees want, said Grinis. He estimated that 25 to 30 percent of TAMI tenants will either give up their leases or shrink. However, companies that are stable and profitable will end up adding space once the pandemic is over, he predicted.

Employees at TAMI companies are also more likely to be under 40 years old and more comfortable with working remotely. Those preferences will shape real estate priorities for the next few years.

“Everyone’s surveying their people,” said Grinis. “I wouldn’t call it unanimous, but more than 50 percent [of employees] are saying, ‘I want a certain number of days to be remote.’ There’s a percentage of people for whom that will be a dealbreaker as an employee, and that will drive policy.”

Newmark’s Falk took a hard line against advising his clients to sublease during the pandemic. Unless a company knows they are going out of business or shrinking dramatically, he argued that subleasing was unwise for most tenants, given the cost of leasing and furnishing a new office.

“I spoke to a major media firm with 100,000 square feet,” Falk said. “They haven’t been in their office since March, and they’re not going to be in there for at least 15 or 16 months total. Their business is not good, but they didn’t go ahead and try to sublet their space. Conversely, if they sublet their space and then go back to normal, they have to go through all the expense of opening a new office.”

And, with the record-high vacancy in the Manhattan office market, the chances of finding a tenant to take sublease space aren’t good.

“If you believe in your business and you’re cutting costs,” Falk said, “you may not want to be going through all of that to get rid of your offices.”