Should financial services start giving back more space, its effects might not be as profound as some observers might think. 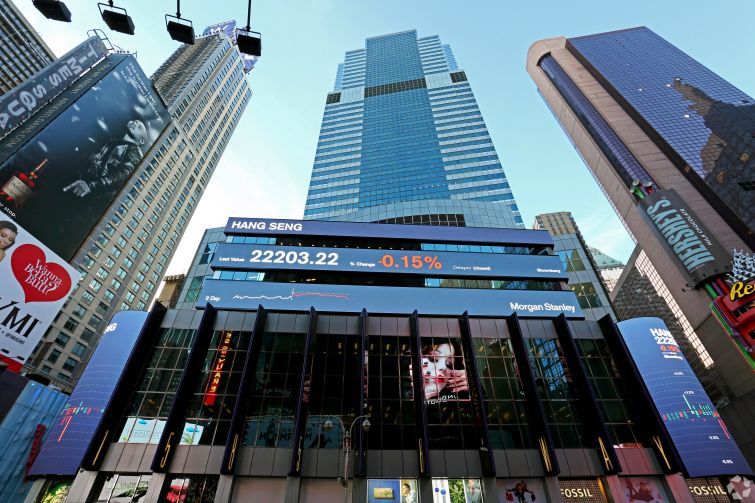 On April 16 — about a week after he had recovered from the novel coronavirus — Morgan Stanley CEO James Gorman said that the financial services firm was considering shrinking its office footprint. Why? Because of what it had learned having some 90 percent of its approximately 80,000 employees working from home due to the pandemic.

“Clearly, we’ve figured out how to operate with much less real estate,” Gorman told a Bloomberg Television audience. “Can I see a future where part of every week, certainly part of every month, a lot of our employees will be at home? Absolutely.”

Two weeks after Gorman’s remark, the Paramount Group announced in a quarterly earnings call that it was pushing back to 2021 its attempt to fill the 500,000 square feet at 1301 Sixth Avenue that Barclays is vacating in December as the bank consolidates its offices.

Paramount had originally planned to pre-lease at least 50 percent of the space in 2020. “[T]hat might be a tall order to achieve at this point,” Paramount Chairman Albert Behler said on the April 30 call. “But we are still confident that we can lease it during the course of 2021 at decent levels.”

Gorman and Behler’s remarks underscored both the possibility of a major shift toward more remote working for companies across the economic spectrum and the challenges of filling space left behind by financial firms — for so long the animating industry of the New York office-leasing market.

In the first quarter of 2020, financial services was among the top two industries in new leasing activity for both Midtown and downtown, according to brokerage CBRE. Indeed, in the former, such leasing deals accounted for 22 percent of all first-quarter activity, behind only the legal industry.

Should financial services start giving back more space, either due to a shift to remote work or consolidation, the market would definitely feel the impact. But such a shift’s effects might not be as profound as some observers might think. That’s because financial services has pivoted before in its New York office usage — and the city itself has changed, especially after clawing its way back from the financial crisis. Any pullback then might not be as acutely felt.

“Finance has been the dominant base lessee in Manhattan for virtually every year in history with the exception of 2019, when tech unseated it for the first time,” Craig Leibowitz, director of research for Jones Lang LaSalle New York, said.

And it’s not just tech, either, Leibowitz points out, but the entire TAMI sector — technology, advertising, media, and information services. The sector had long had a presence in Manhattan, though always deep within the shadow of finance, insurance, and real estate (or FIRE) — and always within its own lane geographically.

There had been Silicon Alley in a handful of buildings in the Flatiron District and nearby starting in the 1990s, but that petered out after the dot-com crash at the turn of the century. Then, in 2006, Google leased two floors at 111 Eighth Avenue in West Chelsea, a ways from the Flatiron. Things changed rapidly after that, and not least because of the last recession in 2008 and 2009.

The downturn highlighted the city’s dependency on financial services and attendant industries such as insurance. Mayor Michael Bloomberg and other officials, public and private, made an effort to foster other industries in the city, and it worked. That 2006 Google lease turned out to be a kind of canary in the coal mine for tech and Manhattan office space.

TAMI, in general, went from occupying 16.7 percent of the Manhattan office market in 1990 to 25.4 percent in 2019, according to figures from Cushman & Wakefield. The sector accounted for one-quarter of all leasing activity in 2019, and the number of new leases that tech firms signed in New York increased 148 percent annually, according to CBRE. Facebook inked New York’s largest lease deal of 2019, signing for more than 1.5 million square feet at Hudson Yards.

Tech leasing activity in 2019 was 7.57 million square feet, according to Franklin Wallach, senior managing director of research at Colliers International, shattering the previous record of 3.99 million set in 2014 — and all the more remarkable as tech only crested 1 million square feet of annual leasing as recently as 2011.

This performance helped Manhattan last year to its second-highest annual leasing total in general since 2001 — meaning that tech pulled the market over the milestone, not finance.

It’s not just that tech and attendant industries are leasing so much but where they’re leasing. Again, Google’s moves are a good example. The search colossus leased or bought a number of properties along West 15th and West 16th streets in West Chelsea in the years immediately after the recession, including 111 Eighth Avenue. The company last year leased 1.3 million square feet at Oxford Properties Group’s St. John’s Terminal, in Hudson Square near West Chelsea. Tech, in other words, has broken out of Silicon Alley.

The sector, though, is still centered mostly in Midtown South. All things being equal, Wallach said, tech companies and related firms are more likely to lease space in an in-demand pocket of that submarket than in Midtown. A lot of that has to do with the age and the size of the spaces as well as tech’s history in Midtown South. Yet that preference only spotlights its growing influence versus financial services.

Take rents. According to Wallach, since the market’s bottoming-out in 2010 following the Great Recession, rents have increased in Midtown South by at least 65.6 percent depending on the submarket. In Midtown, which finance still drives in terms of leasing, the bottom threshold in rent growth has been 29 percent and the ceiling has been 55 percent.

Finally, it’s not just TAMI on the rise. Healthcare, too, accounts for more of the Manhattan market than it did before. That began in earnest with NewYork-Presbyterian’s lease of 500,000 square feet at RXR Realty’s 237 Park Avenue in late 2016 — the largest Midtown office lease for health care on record.

Wallach cites a telling anecdote that belies this diversification in the Manhattan office market: Deutsche Bank is the only major bank left with an actual U.S. headquarters address on Wall Street — 60 Wall Street, to be precise — and it’s moving. The German investment house is planning to relocate in 2021 to the Related Cos.’ Time Warner Center in Columbus Circle.

What’s also telling about that move is that Deutsche is going to reduce the footprint of its New York headquarters from approximately 1.6 million square feet at 60 Wall to around 1.1 million farther uptown. This highlights another major reason why any financial services’ pullback post-pandemic might not shock the office market as it would have 10 or 20 years ago.

Financial services occupies 17.8 million fewer square feet in Manhattan than it did a decade ago, according to JLL’s Leibowitz. Perhaps the best example of this shrinkage comes from one of the biggest firms of all, Goldman Sachs. It was spread out in various downtown addresses prior to the last recession. Goldman then consolidated into 2 million square feet at 200 West Street after that headquarters tower opened in 2009.

And it’s not just that financial services firms are consolidating locations. Deutsche is downsizing in part because it has cut 18,000 jobs worldwide. The number of finance jobs in New York today is almost the same as it was in 2007, in fact, just before the recession, according to Leibowitz.

Finally, new construction like Goldman’s 200 West makes it possible to fit more employees compared with previous spaces. “As companies have relocated to newer construction, they’re able to basically have more people in that space because that new construction is column-free,” Wallach said.

Financial services companies now occupy 28.8 percent of the Manhattan office market, according to Cushman & Wakefield — almost half the 47.8 percent they occupied 30 years ago.

Count Bruce Mosler among the skeptics. The chairman of global brokerage at Cushman & Wakefield thinks not only that it’s way too early to gauge the pandemic’s effects on the Manhattan office market, but that any talk of a pullback by financial services is premature too.

“While the financial services players are very important, they are not the driving force that they were in terms of defining the health of the marketplace,” Mosler said, echoing the statistics showing TAMI’s rise and other trends. “We have yet to see anything that would indicate that people don’t continue to see New York as the financial capital of the world.”

Mosler and others too think that the Manhattan office market is positioned to weather any further consolidation by financial services firms coming out of the pandemic, including any effects on office rents. The institutional nature of much of its commercial ownership is a big factor in that, Mosler said.

“We may see some shadow space, sublease space, that comes on the market that people are willing to move off their balance sheets,” Mosler said. “But that’s not an indicator of the direct rent.”

Also, financial services might no longer be in many cases the choicest draw for landlords in terms of the potential for paying top-shelf rent. That has shifted too along with the leasing landscape. “In the past, the credit tenants had always been the financial institutions,” said Jeffrey Peck, vice chairman at Savills USA. “Now you can easily find credit tenants in many sectors.”

Goldman Sachs and JPMorgan Chase, the city’s two biggest banks, both declined to comment for this article regarding any plans to consolidate space as did Morgan Stanley, whose CEO, James Gorman, touched off speculation about a financial services pullback.

Leasing activity in 2020 in Manhattan is down, and it looks like it’s due to the pandemic (though it could also be due to that continuing consolidation trend, where firms do more with less). First-quarter numbers from Colliers International showed a nearly 50 percent quarterly drop, with leasing activity declining from 3.56 million square feet in January to 2.1 million in February to 1.16 million in March — less than one-third the total during the first month of the year.

“There are clearly more questions than answers at this stage,” JLL’s Leibowitz said. “And then long-term, we’ll see what the impacts will be on segments of the banks’ workforce and their long term occupancy planning strategies.”