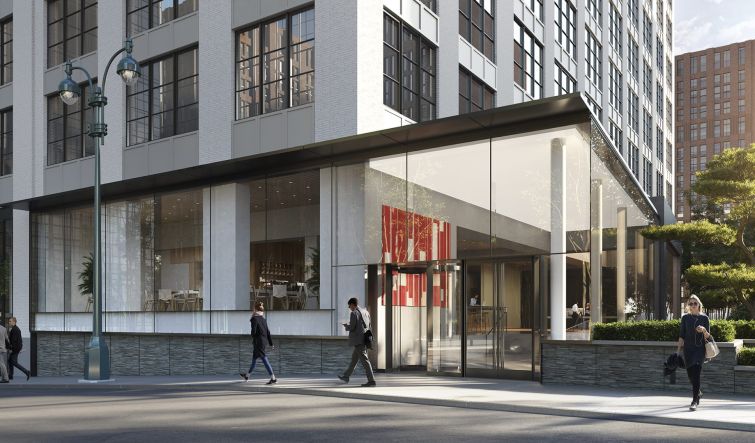 A rendering of the exterior of SL Green's 410 Tenth Avenue, which is undergoing redevelopment. Rendering: SL Green

The e-commerce giant has inked a 335,000-square-foot lease in the 20-story, 638,000-square-foot building, the Wall Street Journal reported. The Seattle-based tech company will move 1,500 employees into the soon-to-be-redeveloped loft property in the third quarter of 2021 without any special tax incentives, an Amazon spokeswoman confirmed.

Amazon said in a statement that it “plan[s] to continue to hire and grow organically across our 18 tech hubs, including New York City,” and that the new office will host its consumer and advertising teams.

Asking rent in the deal wasn’t disclosed, but asking rents for office space in the building hover around $90 per square foot, as Commercial Observer previously reported. Derek Trulson, Bill Peters and Josh Stuart of JLL represented the Amazon in the transaction, and Brian Waterman, Scott Klau, Brent Ozarowski and Erik Harris of Newmark Knight Frank handled the deal for the landlord.

Amazon will be joining First Republic Bank at the property, which signed on as the anchor tenant in April with a 211,521-square-foot lease, as Commercial Observer reported.

Amazon will have some high-profile neighbors as well. The property, located between West 33rd and 34th Streets, is located across the street from Related Companies’ and Oxford Property Group’s Hudson Yards complex, where Facebook recently announced a blockbuster 1.5-million-square-foot lease.

SL Green acquired 410 Tenth, previously known as 460 West 34th Street, in May for $440 million from the Kaufman Organization. After previously considered the building for use as a life sciences hub, the commercial landlord plans to renovate the building into modern office space with a new glass-box lobby, industrial-style windows, new elevators, a new roof deck and lounge, and double-height storefronts on the ground floor.

The deal comes 10 months after Amazon retreated from its ambitious plans to build a campus in Long Island City, blaming its exit on opposition from local activists. The company had planned to build a 4-million-square-foot campus on the waterfront with the help of more than $2.5 billion in state and city subsidies.

Amazon already has 8,000 employees in New York City between its current office space and its distribution hubs, according to the Journal. Its Staten Island distribution center alone employs more than 2,000 employees, and it recently opened a 120,775-square-foot fulfillment center in the Bronx, as CO previously reported.