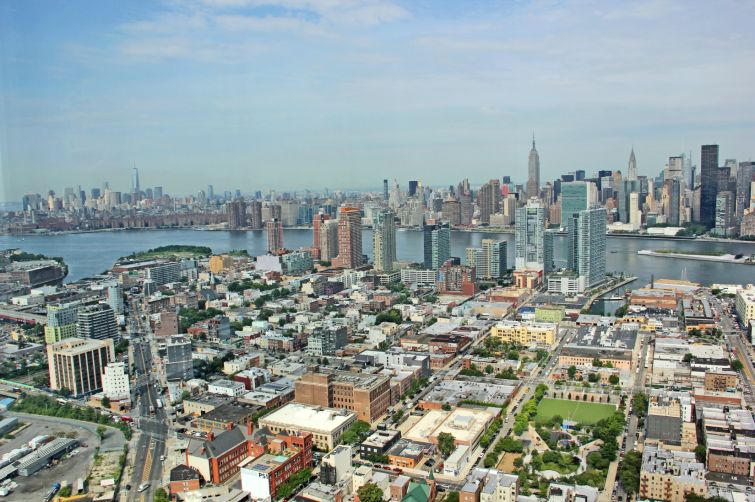 Amazon is getting $2.5 billion in city and state incentives to build in Long Island City, Queens. Photo: CoStar Group

Mayor Bill de Blasio and Governor Andrew Cuomo enthusiastically announced Amazon’s plans to build a campus of at least four million square feet yesterday in Long Island City, Queens, while touting an incentive package of more than $2.5 billion in state and city tax credits and grants. But the question on everyone’s minds was: How will New York City benefit?

As part of its new headquarters, the e-commerce giant promised to invest $2.5 billion in Long Island City and New York City in general and to bring 25,000 jobs over 15 years to the western Queens waterfront. Amazon will construct four million square feet of “energy efficient office space” on a waterfront parcel known as Anable Basin, with plans to grow to six or eight million square feet, according to a memorandum of understanding (MOU) [PDF] with the state and the city released yesterday.

TF Cornerstone will team up with the tech company to build 1.15 million square feet of office space on the Anable Basin properties it controls. (TFC has scrapped the residential portion of its plans for the site, which called for 1,000 rental apartments.) Officials haven’t revealed who will develop the remainder of Amazon’s office campus. The online retailer and the Elghanayan-led real estate firm have also promised to build a 600-seat public school, affordable space for manufacturers, arts groups and early-stage tech companies, and a 3.5-acre waterfront esplanade and park. And the city and state will help arrange a private helipad for the company nearby.

Local plastics manufacturer-turned-landlord Plaxall Realty controls roughly 12.6 acres of the 14.7-acre Anable Basin site. The remainder is owned by the city, which leased the former industrial properties to TF Cornerstone last year. The Empire State Development Corporation—which will oversee the rezoning and acquisition process for Amazon’s sprawling campus—will acquire the city-owned properties and lease them to Amazon for $850,000 a year, per the state memorandum.  The agreement with the state doesn’t spell out the structure of the deal with Plaxall, except to indicate that ESD will acquire the properties for a dollar and then transfer them to Amazon. Plaxall will hold onto the southernmost portion of the site, an assemblage of six lots where it could build an 800,000-square-foot mixed-use building.

The state will offer Amazon $1.2 billion in Excelsior Job credits and a $505 million state capital grant, Cuomo said during his joint press conference with the mayor in Midtown on Tuesday. The company also expects to apply for and receive nearly $1.2 billion in tax credits from city—$897 million in tax credits from the city’s Relocation and Employment Assistance Program (REAP) and $386 million in credits from the Industrial and Commercial Abatement Program (ICAP). Officials expect the online retailer to generate $27.5 billion in revenue for the city and state over the next 25 years, and the city hopes to net roughly $13.5 billion, the mayor and the governor said yesterday.

A separate study commissioned by the state predicted that Amazon would generate $186 billion for the state economy over the next 25 years.

“This is by far the biggest jobs deal in the history of New York City,” said de Blasio, who added that the tax revenue from Amazon would “open up a huge number of doors for economic development” and help “keep this a city that supports everyone.”

“Either you’re part of the economy of tomorrow or you’re part of the economy of yesterday,” Cuomo said during yesterday’s press conference. He defended his administration’s big incentive package to Amazon, which he said would create a 9 to 1 return on investment, as necessary for beating the “54 states” vying for HQ2. (The governor might have been referring to states, provinces, districts and territories, a transcript provided by his office clarified.)

To build Amazon’s campus, the state plans to circumvent the city rezoning process using a controversial land use procedure called a General Project Plan, which was also used to develop Atlantic Yards and Moynihan Station. A GPP allows for input from the local community board and modifications or approval from the City Planning Commission, with the Empire State Development Corporation getting the final say over the plan. Using the state-run process is widely viewed as an end-run around western Queens City Councilman Jimmy Van Bramer, who blasted the Amazon deal in a statement yesterday and told Politico, “This has just been a busted deal and a busted process. It’s not something I can accept or support.”

One notable piece of the tech company’s agreement with the city was that it won’t pay regular property taxes. Instead, it will give the city “payments in lieu of taxes” (PILOT), half of which will go to into a fund for upgrading infrastructure in the neighborhood. At yesterday’s press conference, Deputy Mayor Alicia Glen said that the infrastructure fund will likely net $600 to $650 million over 40 years. The cash will go towards “streets, sidewalks, utility relocations, environmental remediation, public open space, transportation, schools and signage” within a yet-to-be-determined area in Long Island City, per the state memorandum. The PILOT model was also used by the state and the Bloomberg administration to help finance Hudson Yards. But both researchers and watchdog groups have panned the tax scheme for failing to bring in enough revenue to pay down the development’s debt during the first several years of the project.