The pre-lease agreement shows how tight L.A.’s office market has become, with Ticketmaster planning to take over the under-construction property 13 months from now 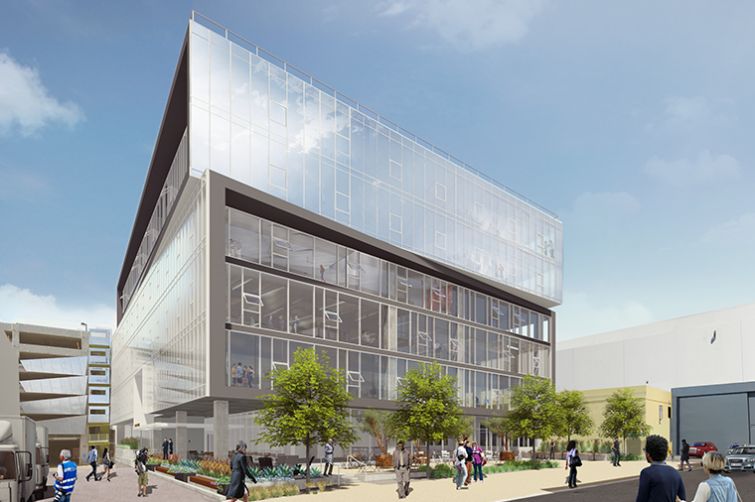 Rendering of courtyard @ The Lot, located at at 1041 Formosa Avenue in West Hollywood. rendering: JJJ

CIM Group has got the ticket to ride in West Hollywood.

The Los Angeles-based developer signed Live Nation’s Ticketmaster to its under-construction Courtyard Building at The Lot office complex, CoStar reported. The ticket sales company will take up all 98,000 square feet at 1041 Formosa Avenue in November 2020.

The agreement marks the largest lease by square footage in the West Hollywood and Hollywood areas in 2019, and it ranks as one of the 20 largest leases in L.A. County since January, CoStar reported.

The Courtyard, which is the third and final structure of The Lot, is expected to be completed in February. Ticketmaster plans to relocate from the space it currently leases in Hollywood, which includes the property at 7060 Hollywood Boulevard.

The Lot campus includes both studio and office space. Tenants at the two existing buildings include fellow media companies like Oprah Winfrey’s OWN Network, actor Will Ferrell’s Funny or Die production company, and Showtime Networks, which signed for 50,000 square feet in January.

Rent at The Lot is about $4.52 per square foot, according to CoStar. That is slightly more expensive than the average market rents in West Hollywood, which jumped more than 3 percent over the past year to $4.81 per square foot due to increasing demand from media companies.

Other media and tech firms like Netflix and Apple have been driving the office market throughout Los Angeles, which saw 4 million square feet of space leased in the third quarter alone this year, according to a recent market report released by Savills. West Hollywood’s vacancy rate is at about 5.7 percent, making it one of the tightest office submarkets in the county, according to CoStar.

Most of West Hollywood’s leasing activity this year happened at the Pacific Design Center, which is owned by Cohen Brothers Realty Corporation. For example, Cedars-Sinai Medical Center is set to add 30,000 square feet to the space it occupies and take up an entire 100,000-square-foot floor at the campus’ Green Building after it renewed its lease for 15 more years. Cedars-Sinai will be neighbors with Advanced Nutrients, which signed a 10-year lease for 13,500 square feet in the same structure in March. And during the same month that Cedars-Sinai expanded, the marketing firm Digital Brand Architects added 6,300 more square feet to its space at the Red Building, which is now 100 percent lease. It was the company’s second expansion at the Pacific Design Center in as many years. The asking rent for the expansion was $4.50 per square foot.

CIM has also been busy this year, most notably when the firm sold the 463,000-square-foot Hollywood & Highland complex to DJM and Gaw Capital.

Meanwhile, Live Nation signed a lease at the end of 2018 to move into a 95,000-square-foot redeveloped post office at 325 N. Maple Drive in Beverly Hills.