Vornado Leaning Toward 2 Penn Plaza Reno Rather Than Raze-and-Rebuild: Roth

REIT likely to move ahead with Bjarke Ingels-designed overhaul, though ground-up redevelopment could have provided path to Penn Station’s salvation 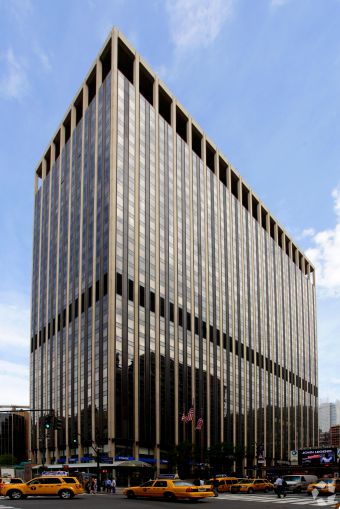 Vornado Realty Trust will likely go with “Plan B” at its 2 Penn Plaza office tower, opting for a widespread renovation of the aging building instead of razing and redeveloping the property, Chairman and CEO Steven Roth said on the company’s first-quarter earnings call today.

Roth touched on plans previously discussed in the real estate investment trust’s annual letter to shareholders last month, in which it was mentioned that Vornado was considering knocking down the 31-story, 1.6-million-square-foot building and utilizing 5 million square feet of development rights at the adjacent Madison Square Garden site to build a new, significantly larger office tower.

But on Tuesday, the Vornado head said that it “does not appear that plan is going to go forward or that it’s feasible”—with the company set to move ahead with its original idea of “skinning” the 1968 building and putting up a “floor-to-ceiling glass” facade, as well as upgrading its interiors and mechanical systems. Previously released Bjarke Ingels Group-designed renderings of the overhaul were notable for a flowing glass canopy encircling the building above its ground-floor entrances.

Roth said that strategy would also add “the better part of 300,000 square feet” of new space to the building, via a “donut”-like addition that would bolster floorplates on the building’s lower floors. While Vornado has yet to announce its planned capital expenditures or returns for such an undertaking, Roth described it as “more actionable” than a ground-up redevelopment and said it is “certainly well within the abilities of Vornado to finance [the project] off our balance sheet today.” He added, however, that work likely won’t start for “a couple of years.”

Vornado has for years weighed a repositioning of 2 Penn Plaza, as well as its wider Penn Plaza assets, though work on those designs has been slow to commence. The REIT is finally kicking off an expansive $200 million renovation of the 57-story, 2.5-million-square-foot 1 Penn Plaza later this year, which seeks to boost in-place office rents at the property to the mid-$80s per square foot from the current mid-$60s per square foot.

As far as 2 Penn Plaza, which rises directly above the Pennsylvania Station transit hub and also serves as an entrance to Madison Square Garden, Roth took time on the call to discuss the building’s contentious recent history. He recalled how Vornado, Related Companies and the Madison Square Garden Company drew up plans roughly a decade ago to move the iconic arena to the site of the James A. Farley Post Office Building, which would have allowed a “total transformation” of the outdated and much-maligned Penn Station.

Those designs were scrapped “when it became pretty obvious that the public sector was not going to be able to get their act together” and facilitate the project, Roth said—noting how Vornado became “the subject of a fair amount of community criticism” as a result of that plan. After that proposal was withdrawn and it became clear that the city was stuck with the existing transit hub for the time being, “the amount of remorse on the part of the government was astonishing,” he added.

While Vornado and Related are now helming the commercial component of the Moynihan Train Hall redevelopment at the Farley Building site, which will alleviate transit issues for Amtrak and Long Island Rail Road passengers in particular, the matter of what to do with the greater Penn Station remains unresolved.

Roth said that Vornado’s idea of razing and rebuilding 2 Penn Plaza would have enabled a plan similar to the failed Madison Square Garden relocation, making possible a Penn Station overhaul that would “daylight the train station.” But the prospective costs of the redevelopment would require a public sector-assisted “financing scheme” that Roth said does not appear forthcoming.

“One of the things we needed was help; as you can imagine, it [would be] a very massive undertaking,” he said. “It doesn’t appear that plan is going to go forward or that it’s feasible, although we’re willing to do it.”

Meanwhile, Roth noted that wariness on behalf of the public markets regarding Vornado’s development activities could precipitate a spinoff of the company’s varying operations further down the line. Like many REITs, Vornado has seen its stock price trade at a discount to its total net asset value—and Roth hinted that the firm’s exposure to the riskier realm of development could be contributing to that dynamic, despite its “extremely modest” expenditures “in relation to returns and results.”

Such a move would not be unprecedented; just last year, Vornado spun off its Washington, D.C., area holdings into JBG Smith Properties, which was formed via a merger with D.C. area-based real estate firm JBG Companies.

Roth added that he was “not sure” whether Vornado would pursue that route yet again and refused to be drawn on the specifics of what a spinoff of its development operations would look like. But he reiterated that such a move might be necessary should development activities continue to hinder the REIT’s stock price—which opened at $68.21 per share Tuesday, compared to its 52-week high of $80.92 per share.