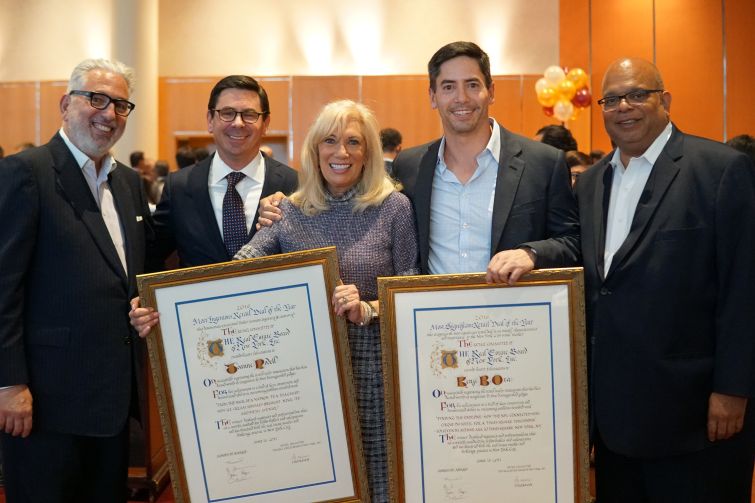 Cushman & Wakefield picked up both honors at the Real Estate Board of New York’s 19th annual Retail Deal of the Year awards tonight in Midtown—with Joanne Podell winning “Most Ingenious Deal of the Year” for her role in bringing Nike to 650 Fifth Avenue in Midtown, and Kenji Ota taking the “Most Significant Deal of the Year” prize for the National Football League and Cirque du Soleil’s deal at 701 Seventh Avenue in Times Square.

It is the third REBNY award for Podell, who won for displaying “exceptional broker acumen” in negotiating one of the largest and most lucrative retail deals of 2016: Nike’s massive 70,000-square-foot flagship store at the SL Green Realty– and Jeff Sutton-owned high-end storefront between West 51st and West 52nd Streets. Podell represented Nike in the transaction.

After receiving her award at the REBNY soiree, held at Club 101 at 101 Park Avenue, Podell told Commercial Observer it was “the most exciting deal I ever worked on.”

Ota, who joined C&W after departing NKF in 2014, won the first REBNY award of his career for his work in arranging the NFL and Cirque du Soleil’s unique 40,000-square-foot retail and entertainment concept at the Steven Witkoff-owned 701 Seventh Avenue, also known as 20 Times Square.

“There were so many great deals this year; all 14 entries were really good,” Ota told CO, expressing both surprise and delight at being awarded the “Most Significant Deal” honor. He noted that work on many of the transactions up for the REBNY awards “started before last year, [during] the peak of the market,” making the selection of nominees particularly competitive.

Podell and Ota’s deals were inked in 2016, in what was an altogether miserable, downcast year for the retail business, both in New York and nationally.

Other brokers on hand for the event this evening were CBRE’s Lon Rubackin, who was nominated alongside colleague Gary Trock for their role in bringing a National Geographic-branded exhibition space to 226 West 44th Street. The deal was not straightforward by any means, Rubackin told CO, given that Kushner Companies went into contract on the retail condominium at the  former New York Times Building during negotiations. In the end, Rubackin and Trock were “able to get it over the line,” he said.

NKF’s Jeffrey Roseman was also in attendance, having been nominated with colleague Marc Frankel for arranging Cinemex’s lease for a new movie theater at Edison Properties’ 400 East 62nd Street. Roseman said he was proud that the Upper East Side location, which for years had held a Clearview Cinemas, remained in use as a movie theater rather than another use that “wouldn’t have had the same impact on the neighborhood.”

Robert K. Futterman was in a jovial mood, and for good reason. The RKF founder, chair and chief executive officer himself was nominated on three of the 14 entries up for the REBNY awards: Under Armour’s deal at the GM Building at 767 Fifth Avenue; Target’s lease at 500 East 14th Street; and Whole Foods’ transaction at One Wall Street.

When prompted for his take on the current state of the retail business, Futterman had wise words to offer: Any company today that is slow to embrace technology “as a part of their business is not going to succeed,” he said. “And retail is no different.”