Disneyfication 2.0: Welcome to the New Wave of Entertainment Venues in Times Square 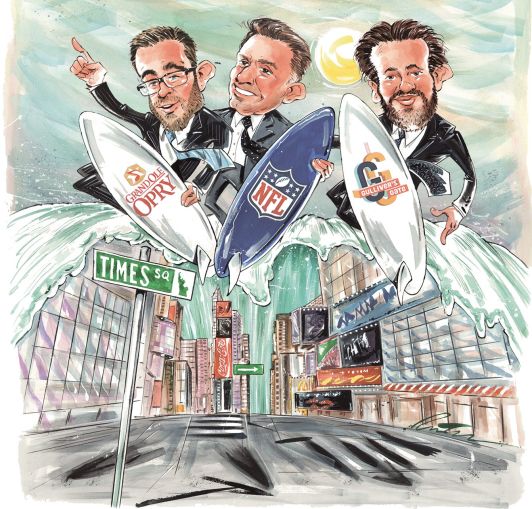 Times Square became a very different place from the time Rudolph W. Giuliani assumed office as mayor until he left eight years later. The shift from a seedy, crime-saddled section of town teeming with sex shops and drug pushers, to a tourist-friendly Mecca with large theaters, retail shops, eateries and hotels was dramatic. It was hailed (or decried, depending on your tolerance for tourism) as “Disneyfication.”

During Giuliani’s mayoral tenure, from 1994 through 2001, the “Crossroads of the World” became home to Madame Tussauds wax museum, the rock ’n’ roll-themed Hard Rock Cafe New York, Ripley’s Believe It or Not! Times Square—with its weird artifacts like a lock of Elvis’ hair and the world’s largest shrunken-head collection—and sports-themed restaurant chain ESPN Zone (which has since closed).

Things got a bit quiet for a while when it came to theme restaurants and venues in Times Square, until now.

“We haven’t had any new real entertainment attraction in ages,” said Lon Rubackin, a senior vice president of brokerage at CBRE.

The National Football League, Hard Rock International and Gulliver’s Gate are just a few of the companies bringing concepts to the Big Apple.

The NFL will be opening an interactive store at 20 Times Square via a 10-year lease, a source with intimate knowledge of the deal told Commercial Observer. The roughly 30,000-square-foot space spans the ground, second, third and fourth floors of the building being developed by a partnership including The Witkoff Group. There will only be a small presence at grade.

The Real Deal first reported in late-May that a deal was close to being finalized at the 270,000-square-foot project, which has an alternate address of 701 Seventh Avenue, at the corner of West 47th Street. According to CO’s source, the deal was signed a few weeks ago.

The demographics of people in Times Square are “attracted” to thematic restaurants and venues, said CBRE’s Stephen Siegel. “That’s what appeals to tourists,” he said, declining to talk about the NFL deal at 20 Times Square, on which he was one of the brokers who represented the developers. Steven Witkoff, the chairman and CEO of the Witkoff Group, declined to comment, and a spokesman for the NFL didn’t immediately respond to a request for comment.

Some of the concepts might not have the brand recognition of the NFL—but make big claims to alter the landscape. The long-vacant Times Square Theater at 217 West 42nd Street between Seventh and Eighth Avenues has a new tenant, as The New York Post reported in March. A source with intimate knowledge of the deal later told CO that the user is a “company involved in Chinese theater” and that the space is 24,000 square feet.

According to another broker, Times Square Theater Co. LLC will be “redeveloping the property into an entertainment and lifestyle complex anchored by several immersive virtual reality 3D movie theaters offering digital entertainment experiences.”

He added, “This is the next generation of entertainment experiences—and goes beyond that of what we have experienced to date even with the IMAX.”

A spokeswoman for The New 42nd Street said the entity declined to comment as it is “still bound by confidentiality.”

On an even larger scale, Hard Rock International’s first-ever hotel in New York City is slated to open in spring 2019 at 159 West 48th Street, as part of a ground-up project being developed by Gary Barnett’s Extell Development Company, as CO previously reported. Hard Rock Hotel New York, between Avenue of the Americas and Seventh Avenue, will have 445 rooms, a lobby bar, a spa and its signature restaurant and lounge. It will not be closing the existing Hard Rock Cafe that is at 1501 Broadway between West 43rd and West 44th Streets. A Hard Rock spokeswoman said last week that no one from the company could comment about the project by publication time.

The world’s largest miniature world—called Gulliver’s Gate—will be opening next year in 49,000 square feet at the old New York Times Building at 216 West 44th Street between Seventh and Eighth Avenues, the retail portion which is owned by Kushner Companies (whose head, Jared Kushner, is the publisher of Commercial Observer). Similar to the model railway attraction Miniatur Wunderland in Hamburg, Germany, the immersive tourist attraction will have model trains, cars, an airport, a ski mountain and people in different continents around the world.

“We’re doing a newer, more advanced version of [Miniatur Wunderland],” said Michael Langer, the founder of Gulliver’s Gate (whose name is an homage to the Jonathan Swift tale) and a partner at E&M Associates. “We’re building a miniature world the size of a football field.”

The two-story indoor display will include a working version of the Panama Canal with moving cruise ships, a miniature airport and The Forbidden City in Beijing. One major feature will allow patrons to use a full-body scanner and make mini versions of themselves to insert in Gulliver’s Gate, as CO previously reported.

Langer said his attraction is not a “tourist trap” because it is educational and lasts for 90 minutes, much longer than others.

It’s time for a venue like this, Langer suggested. “I think most of the attractions in New York feel dated,” he said.

CBRE’s Rubackin said when he was the co-leasing agent for the previous property owner, Africa Israel, the landlord wasn’t in favor of Gulliver’s Gate as a tenant.

“It was a new concept, unproven, and Africa Israel wanted to go with something more established,” said Rubackin, who negotiated the Gulliver’s Gate deal on behalf of Kushner and represented Kushner when he bought the retail portion last year for nearly $300 million. Once Kushner owned the property and two prospective tenant deals went south, Rubackin said he contacted Gulliver’s Gate.

“It’s different and unique,” the broker said. “They’re putting a ton of money into this. They’re telling us they are going to spend between $20 [million] and $30 million. They’re taking well over a year to build it out, which is a long time. Everything is custom made for the space. Most of the buildout is being done elsewhere and will be assembled on site.”

Nashville-based Grand Ole Opry, which bills itself as “the legendary weekly showcase of country music’s finest performers,” took more than 27,000 square feet at 1604 Broadway at West 49th Street for a themed restaurant with music venue and bar, TRD reported at the end of May. The site is controlled through a ground lease by Atlas Capital Group.

Colin Reed, the chairman and chief executive officer of Ryman Hospitality Properties, a real estate investment trust that operates Grand Ole Opry, told The Tennessean in March, “This venue will bring to Times Square and its nearly 40 million annual global visitors a rich country music heritage and an opportunity to experience the unique country music lifestyle.” A Ryman spokesman declined to comment.

Futterman, who declined to talk about Grand Ole Opry due to a non-disclosure agreement, said the 25,000-square-foot former Urbo space his firm is marketing at 11 Times Square has been seeing a lot of “interest from entertainment-themed uses in addition to traditional retailers. We’re not sure which way we’re going to go.” (11 Times Square is also home Señor Frog’s, the Mexican-themed franchised spring-break party bar and grill, which opened last year below grade. Futterman said the restaurant is “killing it.”)

Times Square has some of the city’s highest rents. The average asking rent for available ground-floor retail space along Broadway and Seventh Avenue between West 42nd and West 47th Streets was $2,363 per square foot, according to a spring Manhattan retail report from the Real Estate Board of New York. It ranked as having the second-highest asking rents of Manhattan’s 17 major retail corridors this spring as well as in fall 2015 and spring 2015, only behind Fifth Avenue between 49th and 59th Streets.

“I think Times Square is hot,” Futterman said. “It’s insulated from some of the challenges that retail is facing in the city.” It is still, he noted, “the No. 1 tourist destination in the world.”

Other entertainment attractions and venues are kicking the tires in Times Square.

The company will be taking a multilevel space, with a store at grade, at the Brill Building at 1619 Broadway at West 49th Street, as The New York Post reported.

A source with intimate knowledge of the situation told CO that the 25,000-square-foot space will span part of the ground floor, the lower level and the 11th-floor rooftop once B+B Capital, Conway Capital and partners seal the deal for the $295 million purchase of the property. The building sale is slated to close within two weeks.

In addition to his tropical-themed restaurant Margaritaville and a store, on the rooftop, Buffett will have a Landshark Bar & Grill, the source said, serving a quick bite and drinks in a more casual setting.

Ilan Bracha, the co-founder of B+B, didn’t respond to repeated requests for comment and Abe Cohen, the head of acquisitions for Conway Capital, declined to comment.

In order for existing businesses to stay relevant and new venues to make an impression, they’ve got to up their “game to stay competitive in the Times Square market,” said Tim Tompkins, the president of the Times Square Alliance. He added: “There are a lot of offerings here. Just like Broadway, you’ve got to really pull it together to have a lasting presence.”

At the end of the day, Times Square has a “built-in audience, one that is still hungry for interesting attractions,” Rubackin said. “If you’re a concept you need Times Square, and Times Square needs more concepts.”