Picture Perfect: NYC Is Seeing a Resurgence in Movie Theaters That Are Sleeker, Smaller 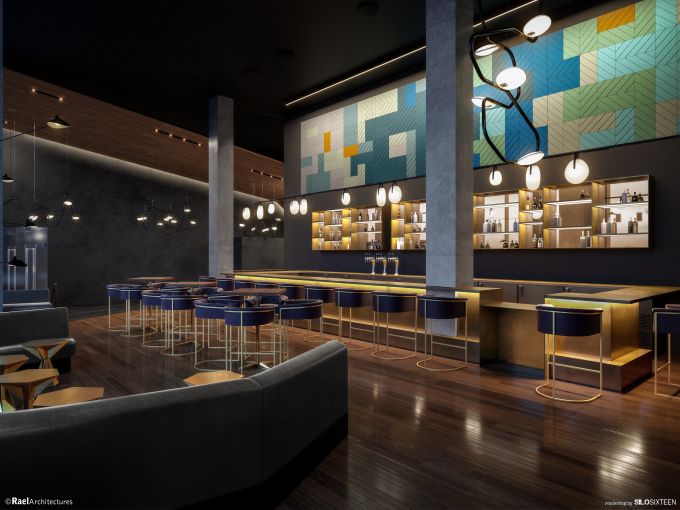 WHEN THE LIGHTS GO DOWN: Landmark Theatres will be opening a tricked out cinema at Via 57 West this September, called The Landmark at 57 West. Image: Rael Architectures

It was early in the opening night party for the revamped Quad Cinema at 34 West 13th Street, and in between the pinot noir and canapés—with a couple of hundred sundry guests rubbing elbows—Charles Cohen took a moment to show off the Quad’s new bar.

“It will open in a few weeks,” Cohen, the head of Cohen Brothers Realty as well as Cohen Media Group, explained to a few of his select guests. (Cohen Media Group acquired the Quad in 2014.)

The café was modest in size but looked as if attention and money had been invested in the space: There was a white bar where the catering team was laying out tiny pastry shells filled with burrata and sundried tomatoes; there were handsome red banquets with small round tables; big mirrors and old and foreign movie posters dotted the exposed brick walls.

“Wouldn’t this be a great place to bring a date?” a visitor in a pinstriped suit said to two others when he came in to admire the bar a few minutes after Cohen left.

Even Mayor Bill de Blasio was in attendance and proclaimed April 13 as Quad Cinema Day in New York City.

The Quad is probably on the less ambitious end of the reboot going on in movie theaters around the city. It’s true, the 1970s-era Greenwich Village multiplex got that spanking new bar, as well as larger facelift that included new lighting, seats from the Norwegian designer Skeie and (most eye-catching) a video wall of 32 individual monitors, but that almost seems par for the course these days.

At a time when “experiential” means more than just improving the quality of the popcorn or adding reclining seats, movie theaters are pulling out all the stops to transform the traditional movie-going experience—and make a profit.

Some of the popular methods of late include providing dine-in culinary options, serving cocktails and craft beers, curating the flicks and shrinking the real estate footprint. And those that don’t rethink, reposition and reinvent the theater experience risk being left behind.

Even the mack daddy of movie theater chains, AMC Theatres, is getting in on the act. On April 10 AMC announced its most dramatic menu revamp in its history. Under the banner AMC Feature Fare, the company will be launching a new menu, starting this summer, at its non-dine-in theaters.

“AMC Feature Fare represents AMC’s first true restaurant-style menu launch in a non-dine-in-theater setting, with a menu selection sure to delight the taste buds,” George Patterson, AMC’s senior vice president of food and beverage, said in prepared remarks. The menu includes fast-food fare like chicken and waffle sandwiches but trendier sounding items like stone-fired flatbread pizzas. (On the menu choices, Ryan Noonan, the director of corporate communications for AMC Theatres, told Commercial Observer, “When people go to the movies, they’re looking for a good time out. They want to indulge a little bit.”)

And the world’s largest movie exhibition company is veering away from super-sized theaters, seeking smaller venues to acquire. Cozy auditorium are de rigueur.

“I think in general the industry is trending toward eight screens, 10 screens, 12 screens—as opposed to the 24 screens or the 30 screens that were being built in the 1990s,” Noonan said. The majority of the roughly 600 AMC theaters in the U.S. are in the 12- to 16-screen range.

“I think a lot of the theaters, their model has shifted dramatically,” Bailey said, since they recognize they have to compel people to leave their living room and Netflix behind. He said that theaters have “refined their model so they can work in smaller formats.”

Bailey is nearing a deal to bring a 34,000-square-foot movie theater to F&T Group and SCG America’s Tangram development at 133-15 39th Avenue in Downtown Flushing. Bailey was tapped to lead the marketing team for the 225,000 square feet of retail at the site.

That is just one theater planned for New York City. Mark Cuban and partner Todd Wagner of Landmark Theatres are readying to open a 30,000-square-foot cinema at Via 57 West; Cinemex is working on its CMX cinema at 400 East 62nd Street; and Nitehawk, which has a dine-in cinema in Williamsburg, is planning a location where the Pavilion theater was in Park Slope. As of late, the city has seen a birthing of new movie theaters. Those include iPic at the South Street Seaport, Metrograph on the Lower East Side, Syndicated in Bushwick, Brooklyn, and Alamo Drafthouse at City Point in Downtown Brooklyn.

CMX, an American subsidiary of Cinemex, will be offering “pure first-run movies in a premium seating dine-in setting,” said Newmark Grubb Knight Frank’s Marc Frankel, who represents Cinemex in the U.S.; sushi and martinis will be served to your seat when the 52,000-square-foot CMX opens between York and First Avenues.

The Mexico-based dine-in movie cinema chain, which has more than 2,500 screens, almost all in Mexico, signed a 12-and-a-half-year lease for the entire five-story property, according to Frankel.

Frankel said CMX stands out because it is “very high-end,” and the company has operated the dine-in theater concept for more than a decade. That means, “We get it,” Frankel said. “We know which foods are too odiferous and noisy for a movie theater.” And the company is planning to install leather seats that can lie flat—not just ones that recline.

CMX has partnered with Chicago-based Lettuce Entertain You, which has more than 100 restaurants nationwide that it either owns, licenses or manages, to develop CMX’s food and beverage program.

“You can have a very good theater experience in your living room…You gotta give people a reason to go to the movies again,” Frankel said. “We believe [CMX offers] an elevated experience.”

That’s in large part because CMX has mastered the operational movie theater nuances like wider aisles for wait staff, fewer seats clustered so servers don’t have to extend their reach over a number of people, and a back exit through which the servers come and go.

“The experience is just as important as the movie itself,” said Tom Stephenson, the managing director at CMX. “Execution is even more important than experience.”

He noted that what CMX is doing on the Upper East Side, with “served food and beverage hand-prepared from our kitchens,” is unique to the neighborhood. And while it may exist at other theaters in the city, “you want the greatest possible experience in your neighborhood.”

Frankel compared other entertainment companies retrofitting their theaters—with things like makeshift kitchens and recliner seats—to McDonald’s trying to serve gourmet coffee. AMC is a worthy example. “Some AMCs have tried an elevated food experience,” Frankel said. “They’re taking the same people and the same kitchen and trying to up their game.”

He added, “Do they really know how to do it? We’ve been doing it for 10 years. Cinemex understands that the menu, the service, the environment and the design all need to work for a better experience.”

Lee & Associates NYC’s Peter Braus, who represented Durst Organization in its lease with Landmark Theatres at Via 57 West, at 625 West 57th Street, gave several reasons why he thinks the 27,000-square-foot Landmark cinema will thrive: It secured a long lease (20 years); “got a favorable deal for the first few years” while it ramps up; is in an area in which the population will grow exponentially over time; and the landlord is “committed” to the cinemas’ success. The cinema will serve light food along with beer and wine, Braus said.

“In New York City, seemingly insurmountable obstacles are routinely overcome by great culture and design,” according to a statement from Ashley Aaron, a vice president of leasing at the Durst Organization. “If you make a great place, which we have, people will come.”

Business has been booming at New York City’s first Alamo Drafthouse, which is in City Point. Indeed, while it’s only been open for less than six months, it’s the highest-grossing venue out of the company’s 25 locations, according to Mike Sampson, the senior marketing and promotions manager for the location. The national dine-in theater chain opened that first New York City outpost, owned by the company’s chief executive officer, at the end of October 2016.

Sampson attributes the theater’s profitability to its film curation.

“We’re not just going to take every single movie that comes out on Friday,” he said. In addition to showing mainstream movies, it plays classic films. And then there are other touches like only serving beer on tap that is 100 percent local from New York State, he said.

Given how much the industry has fretted over stay-at-home instigators like Netflix and Hulu, the movie theater industry has been plugging along fairly well. Among those in the U.S. and Canada, 71 percent went to the movies in 2016, an uptick of 2 percent from 2015, according to the Motion Picture Association of America. The box office in North America reached a record $11.4 billion, up 2 percent from 2015 (note: ticket prices increased by 3 percent, or 22 cents), the trade association found. The number of tickets sold remained flat at 1.32 billion.

Christopher Conlon, an executive vice president and the chief operating officer at Acadia Realty Trust, said he and his City Point development partners, P/A Associates and Washington Square Partners, signed a 20-year, 50,000 lease with Alamo in October 2012. He cited the House of Wax full-service bar showcasing waxwork sculptures as one of its most unique features.

Like with many theater deals, there was a landlord contribution.

“We have made plenty of theater deals in our history,” Conlon said. “Theater deals come with a large amount of tenant improvement allowance. It’s an expensive buildout.”

While Alamo was responsible for completing the actual buildout, Conlon said the developers configured the 1.7-million-square-foot mixed-use project “with them in mind.” He added, “They’re not fitting in to old space. We gave them what they wanted because they got interested so early.”

At the end of the day, with so many at-home viewing options and so many sources of entertainment, movie theater companies have to up the ante to provide a great cinematic experience.

“We need to provide them with an incentive to come out,” Sampson said, so they will “leave Netflix behind.”