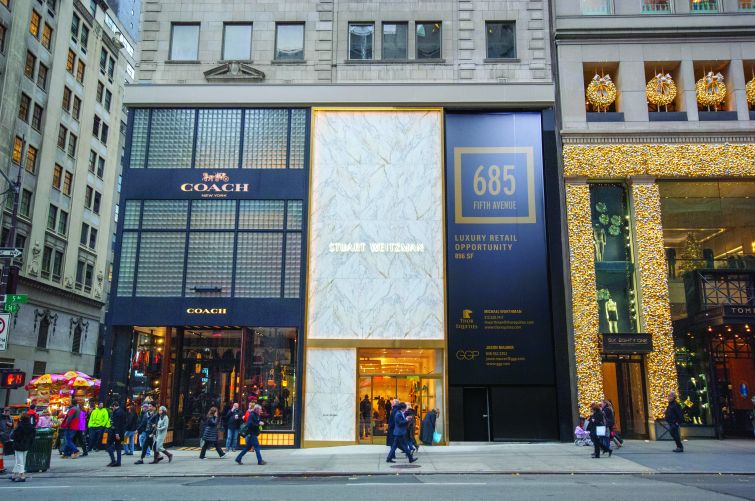 Landlords, as New York City retail heads for a big fall, it’s time for you to face some hard truths. We need to have a serious conversation about how you’re going to get through this downturn without burning too much money and leaving your storefront empty for months, if not years.

Because shopping on the internet will continue to chip away at brick-and-mortar retail, here’s what you need to do to get through the dark times ahead:

“I have three words for you: Lower. The. Rent,” said Gary Trock, a retail broker at CBRE. “[Landlords] need to get a dose of reality as to where the market is and who the tenants are in the marketplace. Offer a little more TI [tenant improvement allowance], be a little more gracious about what tenants are looking for.”

Many who were looking at the prospect of a vacancy with glee a year ago have to realize that things have changed dramatically since then. Rents have already dropped precipitously along certain prime shopping strips. Asking rents have slid 12 percent year-over-year in Soho and Herald Square and 10 percent in Times Square, according to the most recent market report from Cushman & Wakefield. Trock said he was seeing rent drops of “up to 25 percent now,” but other brokers were more optimistic.

“Rents have dropped, but I think we’ve stabilized at this point,” said broker Joanne Podell of C&W. “My team is busy. We’re seeing that business is coming back.”

Some landlords can’t lower their rent beyond a certain point, she noted, because the lenders who financed the property may demand a minimum number.

Still, banks can’t stop landlords from giving tenants cash to build out a space. Both retail and office landlords have embraced the practice to attract businesses to neighborhoods where the market is cooling and as a way to avoid actually lowering rents.

Podell explained that New York City retail owners didn’t need to offer those kinds of incentives until the market slowed in the past year or two. “Landlords are really making every effort to get deals done,” she said. “There are fewer tenants in the market, and there’s less competition. So landlords that are predisposed and can afford to are getting creative.”

Clean Up Your Space and Up Your Marketing Game

“I think it makes a big difference to retailers what the space looks like when you walk in,” said Andrew Mandell, a managing partner at Ripco Real Estate. “The space should be prepped so that when you walk in, you can see the full ceiling height, the space is clean, the former tenants’ installation has been removed.”

If a tenant has to choose between three similar spaces in the same neighborhood, “the one that’s been prepped will feel more attractive to a retailer,” explained Mandell, who added that a clean white box will inspire “a sense of comfort” for tenants on the hunt.

Be Flexible About Deal Lengths

In a risky market where rents are some of the country’s highest, both landlords and tenants are feeling nervous about lengthy leases. If owners aren’t sure they want to take on a tenant for the long haul, brokers urge them to consider two- to five-year agreements.

“In the past no one considered anything less than a 10- or 15-year term,” Podell said. “So let’s make a short-term deal, a two- or three-year deal, and at the end of two or three years, let’s see if you want to stay. That’s something that’s very unique in the past year or two and not very commonplace at all.”

Even in long-term deals, it’s become common for landlords to include an option to terminate the lease after three or five years, Podell noted.

And a growing number of owners are open to pop-ups, which typically operate on month-to-month leases. They generate a few months rent and make the space more attractive to potential long-term tenants.

“There will be lighting, the space will be clean, so that when a retailer comes to see it, it won’t be dark, and it will have a better feel to it than something that’s dark and vacant,” Mandell explained.

Don’t Be Too Picky About Tenants

Many national retailers are struggling to keep their doors open and open new locations. Consequently, landlords are being forced to adjust their expectations as well as their rents.

“When you have a loss of national tenants coming into the market…you have to go with local strong guys that have multiple stores,” Trock explained. “[Landlords] have to think about that or they’re going to sit empty for a while.”

And local food businesses are helping fill in the gaps left behind by big chains. “I’ve done a lot of deals with food and restaurant tenants; that’s the majority of the marketplace,” he said.

Meanwhile, some defended landlords who don’t want to alter their fantasies about the perfect tenant.

“Every owner has a vision for what they want in their building and their retail space,” Mandell said. “If you’re an office building owner, you may want an amenity to serve the 60 floors of office space above. Owners want to provide a service for the tenants above, and they’re willing to wait. If you sign or lease a space for 10 years, solely for the sake of putting a tenant into it, in the case where I’ve just told you it’s an office building, you’ve now filled that space for a long period of time with a retailer or a restaurant that could have an impact on your building.”