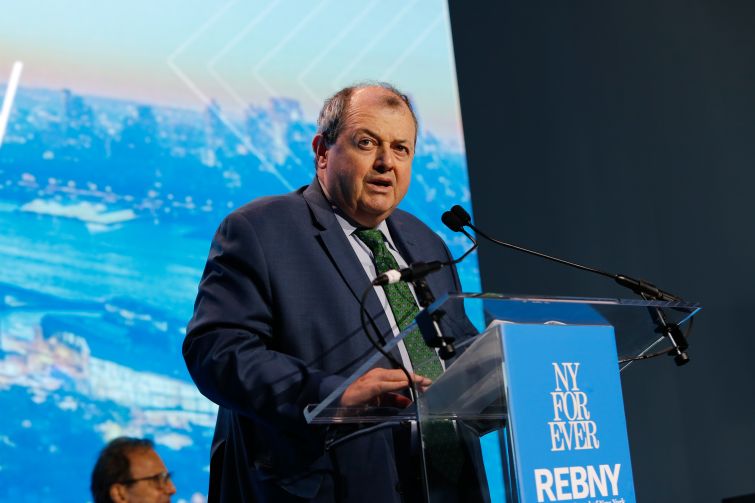 The last two years were bumpy ones for the real estate industry. But that didn’t seem to weigh on the minds of those attending the star-studded Real Estate Board of New York (REBNY) gala, dubbed “New York Forever: A Celebration of Our City,” who were swept up in reuniting with friends and colleagues after a long pandemic year.

Still, guests (who needed to show proof of vaccination to attend) couldn’t ignore the pandemic, which stymied office leasing in New York City, or the fact that 421a, the affordable housing tax-abatement program, expired without a replacement just two weeks prior. While REBNY and real estate are facing plenty of challenges, the event’s new format, venue and participants eager to get back to in-person parties distracted from the industry’s woes.

“The biggest night in real estate was unlike any other in REBNY’s history,” James Whelan, REBNY’s president, said in a statement. “For the first time in almost three years, we gathered in person to not only celebrate our industry leaders but also applaud the resilience of New York City and the exciting future ahead. It was truly an unforgettable night.”

The much delayed 2022 banquet, which drew some of the city’s most powerful developers, brokers, politicians, lawyers, owners and investors, was not quite business as usual. Gone was the New York Hilton Midtown location, replaced by the more modern setting of The Glasshouse at 660 12th Avenue overlooking the West Side Highway. Gone was the awkward standing around dinner tables and swarms of men in tuxedos (gaining the nickname “penguins” by attendees of years past). Instead, a more casual format and short speaker series let industry veterans mingle among food stands and plenty of open bars. And mingle they certainly did.

Hochul’s remarks were highly congratulatory, crediting the industry with helping get New York City through the pandemic and promising a friendly ear in Albany (though the governor didn’t stick around for long after her speech).

“Next session we’re going to make sure that we get the changes we need to support this industry because you create thousands of jobs, you give people their homes, their places of business, and I’m going to let you know how supportive we are going to be,” Hochul said. “The best is yet to come. You’re going to watch an extraordinary comeback.”

Perhaps Hochul’s mind was just the upcoming governor’s election this November, but the city and state have been the source of plenty of good news for real estate recently. The Rent Guidelines Board this week voted to approve the biggest rent increase on rent-stabilized apartments since 2013, letting residential housing landlords raise rents by 3.25 percent on one-year leases and 5 percent on two-year leases. Both Mayor Eric Adams and Hochul have committed to getting city residents back into the office and working with the real estate industry (though Adams never materialized at the event). Perhaps the gala attendees had quite a lot to celebrate.

Those who attended were treated to far more gourmet offerings than in years past. Some of the best restaurateurs in the city like Daniel Boulud and JJ Johnson, were on hand (they both posed for selfies with those who asked) and they served items like grilled shrimp with a cold corn velouté, or salmon with piri piri sauce and pineapple black rice.