Did COVID-19 Really Change the Office Forever? We’re About to Find Out. 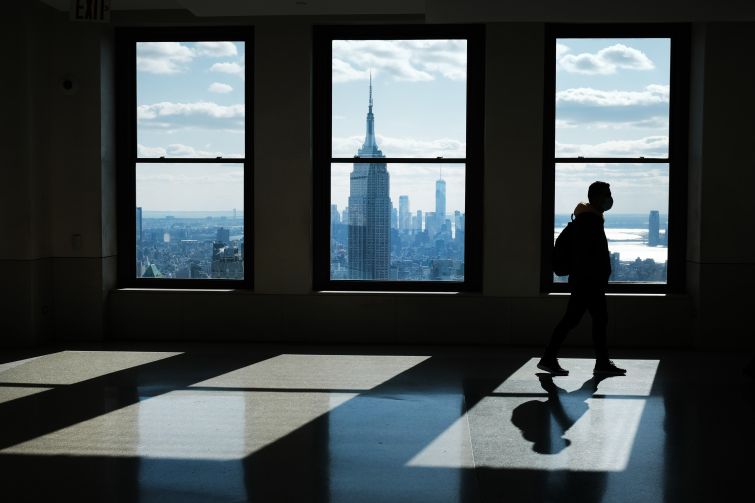 It’s not what anyone in their right mind would call a happy birthday, but this week marks the second anniversary of the World Health Organization declaring COVID-19 a global pandemic. A thunder of dominos fell soon thereafter:

In these last two years every time it seemed like the end was in sight — be it vaccines or infection rates plummeting — something kept coming up that would spoil everyone’s best laid plans.

A number of locales, including New York City and Los Angeles County, are early this month dropping mask mandates for schools and most indoor venues. Public transit agencies, including the New York area’s Metropolitan Transportation Authority, are expecting surges in ridership and dozens of major companies have cemented return-to-office plans. What’s more, the Biden administration last week announced a new national approach to COVID-19 that emphasizes testing and treatment — but not lockdowns.

Something has changed. And that is something worth noting and celebrating.

However, on the cusp of what looks like the post-COVID era, there’s one number that’s been haunting New York’s commercial real estate market and that will seem familiar to other markets. The number is 19.

Nineteen-point-two percent to be exact. That is nearly one in five square feet of Manhattan office space that is available for lease, or at least it was at the end of January, according to brokerage CBRE. The number has never been higher. And, with all the talk about hybrid work and folks being less married to their workplaces, is there any reason to believe that that number is going to drop significantly anytime soon?

Just earlier this month came the story that JPMorgan Chase, the global bank and the city’s largest office space user, reduced its New York footprint by 400,000 square feet, or 4 percent of its total New York presence. This follows cuts by Wells Fargo & Co., BNY Mellon, Voya, MSCI and others.

The reverberations ripple well beyond the Hudson River too.

In Dallas/Fort Worth, the largest Texas office market, fourth-quarter vacancy rose to 22 percent after being 17.6 percent in the last pre-pandemic quarter, the fourth of 2019, according to statistics from brokerage Cushman & Wakefield. In Austin, regarded widely as the hottest secondary real estate market in the U.S., overall office vacancy rose to nearly 20 percent from 9 percent in the fourth quarter of 2019.

Before things started going south and the virus-related recession took hold, commercial real estate all over the country was in one of its go-go periods, with vacancy rates dropping, rents climbing and investors of all types clamoring for product. Yes, there were exceptions, especially in retail, where a trend toward e-commerce was already making stores with doors a dicey proposition. And the cost of finishing out an office, of putting in the furnishings and turning it from raw space to conducive for work, was shifting from tenants to landlords.

But folks were by and large ignoring the headwinds and investment was rising. And it was assumed that the office would always be there.

“For the last 25 or 30 years, when companies talked about office space for employees, many companies, if not most, focused on cost per seat and how to make people occupy less space, or even so they don’t have a permanent place,” said Mary Ann Tighe, CEO of CBRE’s tri-state region. “I laugh, because now they’re startled that no one wants to come back to the office.”

The conventional wisdom is that the office will remain the fountain of company culture and anyone who wants to drink from that fountain will have to come in, at least some of the time, to see their colleagues, to collaborate with them, and to make sure their bosses at least know what they look like. Certainly, CEOs want it that way, both to justify what they are paying landlords for their high-end offices and to impart their central message to their workers.

Not surprisingly, then, in the wake of waning COVID-19 case counts, dozens of major U.S. companies in the past couple of weeks have announced plans for returning most of their workers to the office for at least part of the workweek. Google was probably the most prominent, telling workers it wanted most of them back in the office three days a week starting April 4.

“Everybody says that COVID has accelerated everything,” Tighe said. “What I see is that what COVID is doing is forcing New York City to reinvent its office space, which as far as I’m concerned is good for the city on every conceivable level.”

There are at least five skyscrapers on the drawing board right now that are going to replace old buildings with offices designed with the current market in mind, she said. The Midtown East rezoning, which was designed to help developers replace the old with the new along Park Avenue and its environs, will prove fortuitous, Tighe said.

It already has in one big way. SL Green Realty Corp. opened its more than 1.7 million-square-foot One Vanderbilt skyscraper just across from Grand Central Terminal in late 2020. The tower is nearly entirely leased and commands some of the highest office rents in the city’s history.

An office tower doesn’t have to be new to be successful, either. The one at 320 Park Avenue, built in the 1960s, hit 96 percent occupancy as the landlords, led by Mutual of America Financial Group, spent $35 million to $40 million on a modernization program, which included new lobby, coffee bar and fitness center, according to the New York Post. The entire 16th floor was converted to amenities, including a conference center and food and beverage options.

There already is a flight to quality, indeed, and that’s likely only to get stronger. At the end of 2021, Manhattan’s highest office rents were being charged in the Hudson Yards district, where the skyscrapers are new and have all the latest bells and whistles, the amenities that make coming to work an inspiring thing. According to data from Savills, another commercial real estate brokerage, Hudson Yards’ office asking rents averaged $130 per square foot last year, well ahead of the second-priciest submarket, which Savills calls the Plaza District North, at $109 per square foot.

The flight-to-quality trend is great news for Related Companies and Brookfield Property Partners, the real estate giants that are Hudson Yards’ principal developers. (Tishman Speyer and a partnership of the Moinian Group and Boston Properties are also working on high-rise office projects there.) It’s maybe not so good news for other landlords with older buildings full of more commoditized offices.

Tighe said she expects some landlords might end up converting their office towers to residences, since the city’s residential market has proven to be more impervious to sudden shocks like the virus and the accompanying lockdowns. One big piece of evidence for this trend is expected to open this year: the conversion of the old Irving Trust Building at One Wall Street into a 566-unit luxury condominium building. The plans from developer Harry Macklowe predate the pandemic, but are a sign of things to come, according to Macklowe himself.

“What transformed Downtown?” Tighe said. “One hundred percent it was adaptive reuse of older office stock” redone as apartments.

At the other end of the market, at about $53 a square foot in average rent, was the City Hall area Downtown. Three submarkets, the other two being Penn Plaza/Times Square South and Downtown’s Financial District, were charging sub-$60 rents.

RXR offers an interesting perspective on the New York regional market. While it has been working on expanding its presence in suburbs such as New Rochelle and Yonkers north of the city, Long Island towns like Glen Cove and Woodbury, as well as the outer boroughs of Brooklyn and Queens, it has also been expanding its presence in Manhattan. Its holdings include buildings like the Starrett-Lehigh Building, a gigantic former Chelsea warehouse; 75 Rockefeller Plaza; the Helmsley Building near Grand Central Terminal; and 5 Times Square, a skyscraper that helped spur the district’s revitalization, where it recently partially replaced the accounting firm Ernst & Young (also known as EY) with Roku, which offers television viewers access to streaming content.

The company is marketing a 1 million-square-foot “opportunity” in the building, which sits at Seventh Avenue between West 41st and West 42nd streets.

Omicron, which hit in December 2021 as the real estate market was returning to normal, “put the city on pause a little bit,” said Nicholas Farmakis, a New York office broker with Savills. “I don’t think it affected macro, bigger-picture transactions that were ongoing.”

The fourth quarter of 2021 in Manhattan was “incredibly strong. It was the highest of the pandemic,” said Sarah Dreyer, head of Americas research for Savills. Leasing of 9.3 million square feet was higher than the 9 million-square-foot fourth-quarter average that prevailed before the pandemic. It was indicative of an appetite for Manhattan offices that brokers are hopeful will now resume, she said.

January leasing in Manhattan was 18 percent below the five-year monthly average, after four consecutive months in which it was higher, a sign of a pause in the market, CBRE reported.

“Tenants believe the worst is behind them and are more confident in making long-term real estate decisions,” Dreyer said. There will be a premium on office space that “engages” employees and pushes them to be more “collaborative,” she added.

To Richard Barkham, CBRE’s chief global economist, the office market nationwide will eventually resume its pre-COVID shape, but it will take some time, possibly a couple of years. Current issues, such as inflation and the impact of the Ukraine war, are already replacing COVID concerns, he said, offering as an example the possibility of rapid and dramatic increases in interest rates as an inflation-fighting tool.

On the one hand, hybrid work, wherein workers are freer to choose where they work from — home, the office, a satellite office closer to home or somewhere else that’s convenient — might become more normalized. On the other, when workers do come into the office, they are likely to demand more space for health reasons, he said. Either way, the office — and the trade in office space — will endure.

“We’re going back to pre-pandemic norms,” he said. “The office remains central to business’ operating model.”