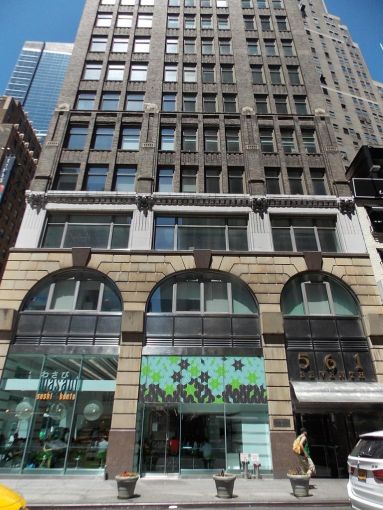 The latest leases at Handler Real Estate Organization’s 21-story building at 561 Seventh Avenue are music to the landlord’s ears.

The landlord signed deals with Element Music, Geopath and Blueprint Lighting, bringing the 81,214-square-foot Garment District tower to 100 percent leased, Commercial Observer has learned. Asking rents were $55 per square foot for all three transactions, according to the landlord.

In one of the two largest deals, music production and entertainment company Element renewed its 3,944-square-foot offices on the entire eighth floor of the property, according to Handler. The landlord declined to provide the length of the short-term lease.

It’s unclear when Element, which has booked musical artists ranging from Billy Joel to Ariana Grande for its ritzy parties, first moved into the property, but it last renewed its lease in 2014, as CO previously reported.

Aside from Element, advertising rating firm Geopath also decided to stick with its 3,944-square-foot space across the entire 12th floor of the building, located between West 40th and West 41st streets, according to Handler. The long-term deal closed in the first quarter of the year, according to Handler, which declined to disclose the length of the lease.

In the only new transaction for the building, Blueprint decided to triple its footprint to 3,000 square feet on the entire 20th floor by trading one Handler property for another when the firm moves in January 2023. The retailer plans to relocate just one avenue east from 315 West 39th Street, and settled on the larger space so it could host designers and architects, said Kelly Aaron, CEO of Blueprint.

Handler’s Darell Handler and Kyle Galin handled all three deals for the landlord in-house and represented both Element and Geopath in the companies’ respective transactions. Alex Bush of Handler represented Blueprint.

Element and Geopath did not immediately respond to requests for comment.

“With these new leases, we are gratified to announce that we no longer have any vacancy in the building,” Handler’s CEO Scott Galin said in a statement. “The success of 561 Seventh Avenue has been a combination of diligence, patience, flexibility and the underlying confidence that the New York City market would come back.”

The office tower just below Times Square is also home to the South Korean fashion manufacturer and exporter Hanase, which took the entire fourth floor of the property for an office and showroom space in 2018, as well as Philippine National Bank and French fabrics company Solstiss.