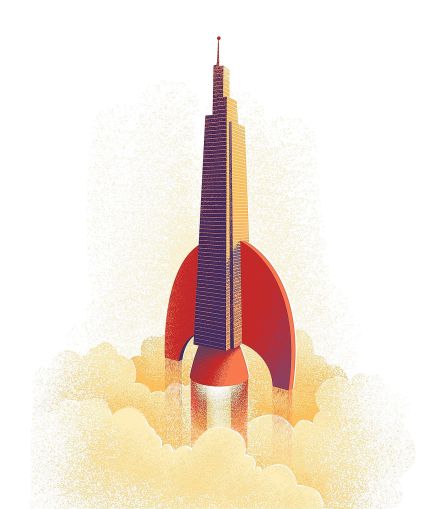 One Vanderbilt reached the sky, as did much of Class A office. Illustration: Kevin Falles for Commercial Observer.

Class A office space was one of the clear commercial real estate winners of the pandemic.

COVID-19 emptied most office space both nationally and in New York City, and most of it still remains empty on any given weekday, according to security firm Kastle Systems, which tracks access swipes at office buildings in major U.S. markets. This exodus in early 2020 killed demand for space and damaged the investment value of office properties.

As workers trickled back, however, it was the Class A buildings that saw the most demand. That demand has manifested itself in higher rents and brisker leasing. Lenders, too, are no longer as skittish about financing Class A. (Commodity buildings, that’s another story.)

The reality of the numbers translated quickly into conventional wisdom. Brokers and developers have for months been espousing the sagacity of owning, investing in and converting to Class A space. The office market in New York and elsewhere became all about how to make the office more appealing and efficient to lure workers back and restore the strong market fundamentals that predated the pandemic. Class A, with its sleek, airy modernity and snazzy amenities seemed the way to do it.

Many of the biggest names on this list are there precisely because they either pivoted their properties to Class A during the pandemic or, more often, played in the sector already. Think SL Green Realty Corp., the Durst Organization, RXR, Rudin Management, L&L Holding, Brookfield, Vornado Realty Trust, and on and on. The leasing brokers on this list, too, deal largely in Class A space.

Indeed, it’s the Class A spaces that have higher-grade air filtration and the sweeping outdoor terraces prized now more than ever in a world acutely aware of the dangers of airborne disease. It’s the Class A property that has the flex space, the golf simulator, the beehives — the special scents. Really. The biggest investment sale in New York City since 2019 was the sale of the primarily office building at 441 Ninth Avenue, which includes specialized interior scents (it was pine at the time of the $1.033 billion close in December 2021).

The financiers behind office sales have taken notice of the A trend train, too.

“We have a large office exposure but we certainly prefer, and see more value in, newer office or recently renovated office — in terms of what tenants want,” Scott Weiner, global head of commercial real estate debt at Apollo Finance, told CO previously.

And lest we attribute it all to the pandemic’s disruption, the stats also show that Class A’s meteoric rise was spied long ago.

​​Rents in new-construction office space in Manhattan increased more than 98 percent from 2000 through the summer of 2020, compared with just over 75 percent growth for Class B, according to JLL. The average asking rent for Class A space in general — new construction or otherwise — easily outpaced the Class B average during the same 20-year run, starting at $50.10 a square foot versus $35.25, and ending at $86.21 a square foot versus $61.79.

Demand, too, reflected the wide gap. The same JLL statistics showed a generally downward slope since 2014 in the annual volume of Class B space leased in Manhattan. Class A’s volume stayed ahead by many millions of square feet per year: In 2020, tenants leased 11.5 million square feet of Class A versus 3 million of Class B; and, in 2019, 27.4 million square feet versus 4.7 million.