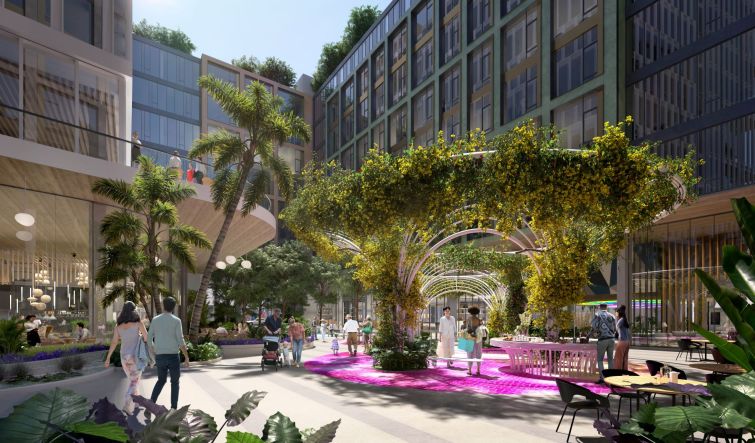 Tech behemoth SoftBank Group is in active negotiations for two floors of a massive Wynwood development slated for the popular Miami neighborhood, Commercial Observer has learned.

The nascent project already counts SoftBank — one of the world’s largest tech investors, known for making big bets on Uber, Alibaba and WeWork — as a potential office tenant. The tech giant is in “advanced pre-lease conversations” to occupy two floors, which equates to 53,200 square feet, according to a source familiar with the negotiations.

A large law firm is also in “advanced discussions” to take another floor, or 26,000 square feet, the source added.

With 266,000 square feet of offices planned for the new development, the deals — if finalized — would bring the project to 30 percent leased with SoftBank accounting for 20 percent of the share and the law firm the remaining 10 percent.

SoftBank, the Godfather of Miami Tech

Within Miami, SoftBank is widely regarded as the patron saint of the city’s growing tech scene.

In 2019, the investor opened a Miami office at 600 Brickell Avenue, according to The Miami Herald. From there, the company has launched several tech-focused initiatives, including its $5 billion fund for Latin American start-ups and $100 million fund for Black, Latino and Native American founders. Over the past year, the company has funneled more than $250 million into startups based in Miami.

The firm’s second in command, COO Marcelo Claure, is a Miami resident who has led the charge. But Claure’s future at the company may be in flux since he’s fighting with boss, company founder and CEO Masayoshi Son, to receive $2 billion in compensation.

SoftBank had reportedly been in the market for a large office since last year, and a signed deal would be another sign of the company’s long-term commitment to the Magic City. The Wynwood office would likely not be operational before 2024 when the development is scheduled to open.

A SoftBank representative did not respond to a request for comment.

The Wynwood Plaza is the latest and one of the largest new developments planned in Wynwood, the sizzling Miami district revitalized by the creation of colorful murals on old industrial warehouse walls over the past decade. Restaurants, bars and cutting-edge retail soon followed.

L&L and CREP’s project is almost a neighborhood unto itself. Formerly known as N29, it will include 266,000 square feet for offices, 32,000 square feet for retail as well as 509 rental apartments, all surrounded by a 25,000-square-foot outdoor plaza and promenades connected to the greater Wynwood community.

“We don’t view this as a series of individual buildings. We really view it as a place,” Adam Metzger, senior vice president at New York-based L&L, told CO.

The developers, Metzger stressed, want the complex to fit the mood of the trendy neighborhood. The pedestrian streets throughout the Wynwood Plaza will feature sculptures and murals from local artists, while also being lined with palm trees, flowers and other plants.

The three-acre site sits on the northeast corner of Northwest First Avenue and Northwest 29th Street, part of the location where the Rubell Museum once sat. The modern art museum relocated to nearby Allapattah in 2019.

Local authorities must still give their final approval. They rejected prior plans last year. But Metzger is confident the current proposal will stand, having “come to a verbal agreement” with officials.

The developers are now negotiating with “multiple sources” to fund the construction, according to Metzger. They expect to break ground in the second quarter of this year.

Over the past year, Wynwood has matured past its retail-heavy image to become a landing pad for tech companies. Silicon-Valley venture capital firms, Founder Fund and Atomic, opened offices at a nearby mixed-use development, the Wynwood Annex.

L&L’s partner, New York-based CREP, is no stranger to tech tenants. At one of its other Wynwood developments, the mixed-used Oasis, Spotify signed a 20,000-square-foot lease in 2019.

In the long term, Metzger sees parallels between Wynwood and New York’s Flatiron and Meatpacking districts, which grew beyond its initial tech and creative tenant pool.

“Eventually, you start to see more traditional accounting, law firms who come to the neighborhood to support their client base,” the developer said.

Metzger declined to comment about all tenant negotiations at the Wynwood development.