Companies such as Wynd, Oxygen8, Awair and AtmosAir are drawing new business, and VC firms are taking notice too 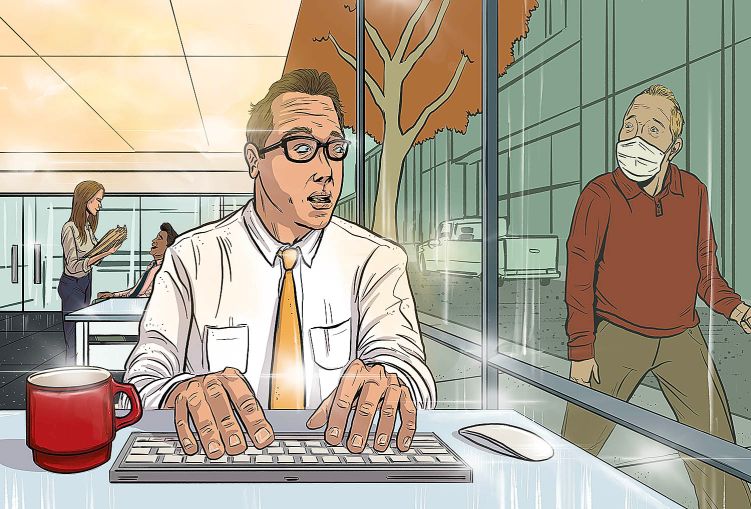 In their ongoing efforts to return workers to offices as COVID-19 wanes, companies and other organizations are pushing landlords and owners to improve indoor air quality (IAQ), with both sides engaging a wide range of proptech startups and more established companies to meet the demand.

The growth of the IAQ sector has been explosive for his company, said Dustin DeVan, CEO of Awair, a San Francisco-based health and wellness company that monitors indoor air quality.

“By the end of this year, we will have grown 400 percent year over year,” DeVan said. “We’ve seen growth from the consumer and the enterprise side and in schools and corporate office space.

“Essentially every market is looking to understand indoor air quality better. Not that anyone can directly track COVID in the air, but people are generally more conscious of what they breathe and that it can affect their health.”

“With tenants, they really care about their employees. One of the things they can do with Awair is to show their employees they’re taking health and safety seriously. We have a display mode which allows them to actually showcase the quality of air they’re breathing when they walk into their office. That goes a long way to building employee confidence that this is a company that cares about my well-being.”

Other proptech startups are experiencing similar demand for their IAQ mitigation services.

One such startup, Oxygen8, provides a ventilation system that pumps “100 percent outside air into buildings and exhausts stale, contaminated air using high-efficiency heat exchangers and low-energy bands to do that in a low-energy way,” said James Dean, its CEO.

“Unfortunately, [the demand] is more from the tenant side,” added Dean, who would like to see more clients for his startup coming from the landlord side, as well. “They’re the ones that are demanding healthy and safe environments for their workers on the office side.”

However, Dean is also seeing many K-12 schools and universities assessing their classrooms in order to better understand and upgrade their ventilation systems. Another huge market is senior-care facilities, particularly older facilities that may not have adequate ventilation.

Additionally, a number of companies “that are very progressive,” including Google and Lululemon, are building new offices and instructing architects and engineers to focus on IAQ, Dean said.

Wynd, another proptech startup, began as a consumer business selling air quality monitors and purifiers, said co-founder and CEO Raymond Wu. The six-year-old, San Carlos, Calif.-based company is in about 45,000 homes and is focused on IAQ, but is also deeply concerned about the impact of climate change on outdoor air quality, Wu said.

“Wynd focuses on monitoring and improving indoor air quality,” he said. “We believe that air quality and air health are critical, especially in this day and age with fears of disease transmission, and pollution from things like wildfire smoke. If you look at this as a global issue, air quality affects 90 percent of everyone around the world, according to the World Health Organization.

“The problem with the air, though, is it’s invisible. So people don’t really know if they’re in a good or bad environment, to what extent, and what to do about it. So we really want to use our technology, which centers around proprietary air quality monitoring and analytics, to be able to uncover what’s in the air, how that affects health, as well as even property risk. Then, ideally, either automate the built environment for the building to take care of the problem, or recommend the right products and services to help them address it.”

Similar to Oxygen8, Wynd is seeing “10-xed growth year-over-year” coming from “our enterprise business, which is primarily dealing with corporate real estate,” Wu said. “We work with owners and occupiers, but I would say the occupier side is just moving generally a little bit more quickly.”

Unlike some IAQ remediation companies that use ionization technology, Wynd uses HEPA, or high efficiency particulate air, and carbon filtration in its system, Wu said. “Those things [ionization tech] are heavily marketed, but don’t work that well because air moves too quickly.”

“Our devices have two differences,” he added. “One is that they move massive amounts of air. We can cover more square footage than any other device out there for air purification. One device can cover 1,200 square feet. The second thing is that on an enterprise software side, our devices are much more intelligent and easily managed by essentially whole buildings. We can have hundreds of devices in a Marriott hotel and they can all be suite-managed using software that can save energy. We’re one of the official air purifiers for Marriott Hotels globally. They’ve done testing on hundreds of devices. And they selected us.”

A longer-established company focused on IAQ is AtmosAir, founded in 2004 and based in Fairfield, Conn. The company uses “unique technology called bipolar air ionization that has the ability to impact air and surfaces and disinfect and clean air in an active and continuous way,” said Anthony Abate, its chief technology officer. “We couple that with sensors that can monitor the air continually. So the user can see their air quality in real time, giving some transparency to the overall health of the air in any space.”

The company uses an “active,” more modern ionization technology rather than a “passive” carbon-based or other filtration-based tech, to capture incoming air particles instead of outgoing ones, Abate said.

“We put our systems on the supply air side, whereas filters reside on the return air side. We’re taking the bipolar ions, which are a natural phenomenon [in] the ecosystem and we restore that ion level to what you find in that untouched outdoor space. The two types of technologies really complement one another — active and passive — and both help provide a very complete solution.”

Venture capital firms that focus on proptech, particularly ones with a focus on ESG and sustainability, have taken note of the IAQ sector, said David Harris Kolada, a managing partner at Toronto-based Greensoil PropTech Ventures, which has invested in Oxygen8 and Wynd.

“In our new fund, which we launched last year, two of our first four investments are in indoor air quality,” Kolada said, adding that Greensoil describes itself as an “impact” investor.

“Impact for us means predominantly carbon reduction. How do we reduce the carbon footprint of the built environment is very important to us,” Kolada said. “We’ve committed at least two-thirds of our new fund going into technologies that reduce the carbon impact in the real estate sector and both [Oxygen8 and Wynd] do that.”

Greensoil Ventures Fund II opened last year targeting a raise of $100 million-plus, and, as of its second close this September, it is at $56 million, Kolada said, adding that the firm was “putting in more than twice what we put in in the first round in January” for Oxygen8. “It’s a significant increase, and we’re going to be increasing our ownership as a percentage of the overall ownership, as well.”