But how effective are the systems against COVID and other pathogens? 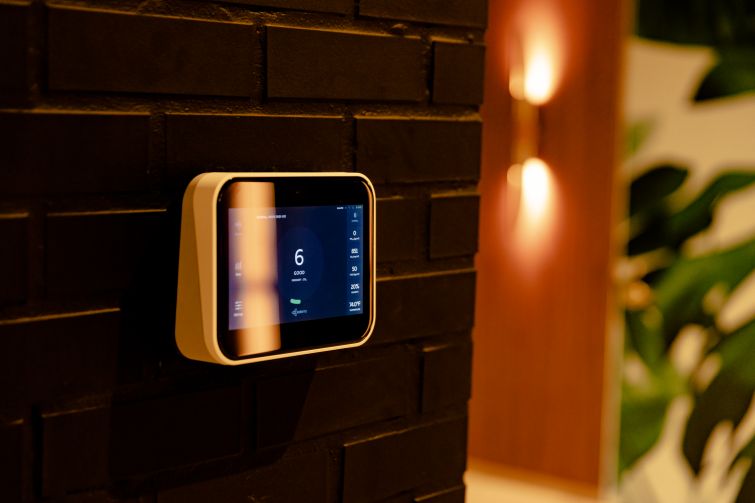 THIS ONE GOES WAY PAST 11: Monitors inside Marx Realty’s 10 Grand Central gauge and maintain the tower’s air quality. A range of between 5 and 12 is considered healthy. Sasha Maslov

“Sometimes,” The Hollies sang, “all I need is the air that I breathe and to love you.” Well, commercial real estate people can’t help with the latter, but they are fairly obsessed with the former.

You’re probably not thinking about this most reflexive of acts while you’re in the office, but if you are in a modern building, there may be a control room somewhere in or outside of the building that among other things monitors the very atmosphere office dwellers are inhaling and exhaling. And, if an element of the air gets too high or too low, an adjustment is made to make sure the air breathed is optimal for health. There are filters to remove particulates, and they come in progressively effective strengths.

And with COVID and the airborne virus that causes it on top of everybody’s minds, as workers dribble back to the office, these systems are getting more attention than ever. It’s a dominant topic for the American Society of Heating, Refrigerating and Air-Conditioning Engineers, or ASHRAE for short, which offers detailed guidance on what building engineers must do to ready their properties for the reopening.

“The air in here is healthier than the air you breathe on the sidewalk,’’ said Douglas Durst, chairman of the Durst Organization, one of New York’s most active builders and owners. “I always find that I’m much more alert inside the building than I am outside.”

Durst has, for decades, been at the forefront of the green movement in real estate. It’s not virtue signaling but, instead, solid business sense, he has said. Cleaner air attracts a better class of tenants willing to pay higher rents for Durst buildings than the less progressive buildings down the street.

The company’s 4 Times Square, also known as One Five One on 42nd Street, helped pioneer Times Square’s transformation in the 1990s from a seedy, pornography-laden zone to a Disnified tourist mecca. It did that, in part, with a sensory system called Aircuity that constantly monitors the air inside a building and adjusts the intake if too much of a certain substance, such as carbon monoxide, turns up.

Durst went on to add a similar system at 1 Bryant Park, a.k.a. the Bank of America Tower. One Bryant “went even further,” Durst said. “We further filtered the outside air. This is something we recognized was important way before the current crisis.”

Air systems start with outside air and also recirculate indoor air, said Kathleen Owen, president of Cary, N.C.-based Owen Air Filtration Consulting and a member of ASHRAE. Then, the advanced ones monitor the outdoor air to make sure it’s not bringing in noxious gases and impurities; but Owens said that these more advanced ones are not very common.

“Usually in commercial buildings, there are temp sensors that control when the HVAC runs,” she said, referencing the heaters and air-conditioners that keep buildings comfortable. “Some buildings have [air quality] sensors, but it is not the norm.”

At 10 Grand Central at 155 East 44th Street, a fairly typical Midtown office building, the air is zapped by ultraviolet rays, goes through a bipolar ionization system, and is finally sieved through a MERV 13 filter. (MERV, which stands for “minimum efficiency reporting value,” is a series of filters; the higher the number, the more dust and particulates caught. Values go from 1 to 16.)

Perhaps, the most remarkable thing about 10 Grand Central is its tenant roster, which includes Dwayne “The Rock” Johnson’s production company and international news agency Agence France-Presse. It also won a Pinnacle Award for renovated building of the year from the New York chapter of the Building Owners and Managers Association.

The U.S. Green Building Council, the organization behind the LEED environmental ratings for buildings, recommended using MERV 13 or 14 filters, according to an article on the association’s website. A properly designed air quality system will filter out the coronavirus and, therefore, be critical to the reopening of buildings, including schools, the council said.

Workers in 10 Grand Central can track the air quality on little read-out screens posted throughout the building. While a reporter was there, the number on the screen ranged from 5 to 12, all acceptable ranges. If it got to 100, the building’s engineer said, that would be trouble. A male wearing strong cologne has been known to make the reading jump. There is a control room, too, for controlling the air quality, but it is off-site, said Craig Deitelzweig, president and CEO of Marx Realty & Improvement Co., the principal owner and operator of the building.

One of the innovations used at 10 Grand Central is simply having windows that open and close, something that’s been hard to find in the increasingly glassy towers that have been going up since the 1950s.

When the meters show the air is edging toward something less than optimum, one thing Marx does is open windows and doors to the outside. “There’s nothing like fresh air,” Deitelzweig said. “That’s why outdoor venues were allowed to open before inside ones.”

This past week, occupancy, in terms of people in 10 Grand Central, was at about 32 percent, he said, a high-water mark for the crisis. Lately, the percentage has been in the 20s, he said.

Air quality is also a top selling point for, perhaps, the most prominent — and, certainly, the largest — new commercial real estate development in America: Hudson Yards on Manhattan’s Far West Side, which includes several million square feet (and counting) of office space.

“We built Hudson Yards to be as future-proof as possible, which included having best-in-class, commercial-grade MERV filters and multiple points for fresh air intake offering the highest-quality air, with 30 percent more fresh air than a typical office,” Related Companies, Hudson Yards’ co-developer and current operator, said in a statement.

The focus on fresh air indoors turned out to be prescient, the company said.

“Pre-pandemic, air quality wasn’t top of mind for many of our office tenants, but today, it is something their employees are increasingly asking about and a key factor in making people feel comfortable returning to their offices,” Related said.

Cushman & Wakefield’s Wheatley said that much of this technology is not new. In fact, ultraviolet technology, as a means to filter out air impurities, goes back more than 100 years.

“For particles that are too small to be filtered, even by a MERV 13, they’ll go right through the filters and come back out,” Wheatley said. “So the objective is to make those particles larger.”

There could be a “trade-off,” however, Wheatley said. All these techniques to clean the air take energy and could raise costs, he said.

Knowledge on how to employ these technologies continues to evolve. ASHRAE is planning an update in the next few weeks on the effect of ultraviolet on the virus. It is believed that the technique has some positive effect, but just how much and how to employ it won’t be known until the ASHRAE study is published, Wheatley said.

“Even if it’s not this pandemic, it may be the next, but I think overall, people are going to have a better understanding of air quality facilities,” Wheatley said. “I don’t think we’ll ever go back to the standards of [running] the air through the lowest filter and [pushing] it out, and go breathe it. There will be a more savvy understanding of how things work.”

Until then, there are the government guidelines as well.

Owen, for her part, cautioned about relying on machines to protect against COVID. She instead advised continuing to wear a mask and to practice social distancing till the authorities say it’s safe to stop.