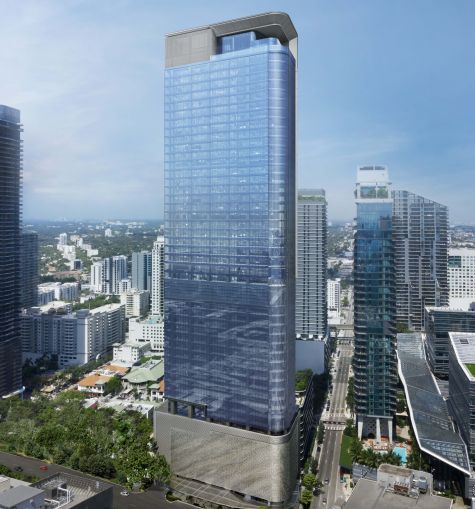 Microsoft has finally landed in Miami, marking the Magic City’s ascension as a tech hub.

“The new location will also serve as a bridge to deepen relationships with our customers while navigating the ever-changing hybrid work environment,” Mariana Castro, Microsoft’s Latin American vice president of marketing and operations, said in a statement.

Located in Miami’s financial district, the 55-story 830 Brickell has become one of the city’s most high-profile office developments, boasting some of its highest asking rents and most notable leases. Earlier this year, private equity firm Thoma Bravo took 36,500 square feet at the property.

The 640,000-square-foot tower is currently under construction, and the developers will turn over the space to Microsoft by the third quarter of 2022, the C&W brokers added. The office is slated to open “mid-2023,” according to Microsoft’s Castro.

It’s unclear whether Microsoft will keep its current office at Cypress Park West in Fort Lauderdale. Colliers’ Alexander Brown, who represented the company, did not immediately respond to a request for comment.

After a January 2020 article in Business Insider about a pending deal, Microsoft’s negotiations at the trophy tower quickly became lore around town, a sign of Miami’s appeal to the tech sector. (CO later verified BI’s report.)

During the last quarter, the number of listings for tech jobs in Miami grew faster than in any other major U.S. city, according to a CompTIA analysis of Burning Glass Technologies Labor Insights data cited in the SFBJ as reported by The Next Miami.