Rents ran north of average asking rents of $64 per square foot for the area, a source said. 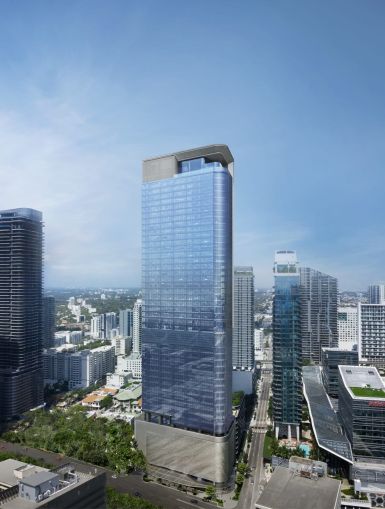 Private equity firm Thoma Bravo is expanding its presence in Miami with a deal for 36,500 square feet at 830 Brickell, the trophy office tower being developed by OKO Group and Cain International.

Thoma Bravo will take space on the top two floors of the 55-story building on a long-term lease, according to information from the developers. The firm, which has offices in Chicago and San Francisco and has already set up a temporary office in Miami at WeWork’s Wynwood Garage space, expects to move into 830 Brickell during the fourth quarter of 2022, after construction has been completed.

“Thoma Bravo’s lease at 830 Brickell aligns this best-in-class tenant with the best-in-class tower,” said Brian Gale, vice chairman at Cushman & Wakefield, who represented the developers, in prepared remarks. “There are numerous technology, finance, private equity, and investment firms moving and expanding to Miami from across the U.S. and around the world, and this puts an exclamation point on the Brickell Financial District’s brand as Wall Street of the South.”

The building, the first stand-alone class A office to be developed in the Brickell Financial District in over a decade, will be completed next year and span 640,000 square feet. WeWork has already signed on to take a reported 146,000 square feet in the building. That deal, combined with Thoma Bravo’s agreement, means the building is about 30 percent leased.

The developers are in talks with tenants from technology, finance, law and banking industries to lease an additional 300,000 square feet of space.

“830 Brickell is the perfect home for Thoma Bravo Miami given its location in the city’s thriving business center and proximity to some of Miami’s best outdoor spaces,” said Chip Virnig, a partner at Thoma Bravo, in prepared remarks. “We look forward to joining Miami’s growing finance and technology communities and providing a culturally enriching environment for our employees in this exciting new chapter for our firm.”

Miami is becoming a hot destination for businesses looking to expand into South Florida, with buildings like 830 Brickell testing the waters on office tenants’ appetite for Manhattan-style rental rates. The building has quoted rental rates of $75 to $85 per square foot, as previously reported.

Cain International is betting on Miami’s future as a key U.S. city, and so far, the company’s bet appears to be paying off, CEO and co-founder Jonathan Goldstein told CO.

“People didn’t have the confidence that the tenants would follow to the marketplace,” said Goldstein. “We had a vision with OKO a number of years ago, that Miami was on the cusp of a significant change. And the last 12 months have begun to show that our vision and belief in Miami as a global gateway city, [is showing] itself to be correct with the number of companies that you’re seeing relocate… We’re very confident we’re on the right track.”

Update: This story has been updated to include statements from Cain International’s Oates and Goldstein