The city is actively branding itself as a crypto destination 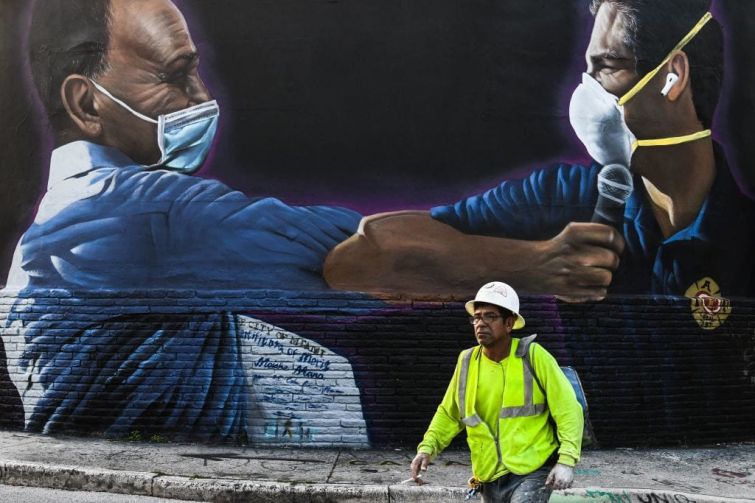 Miami is hosting the city’s biggest in-person event since COVID began, with the Bitcoin 2021 conference taking place in Wynwood this week. The conference is expected to bring hordes of visitors, and is helping boost Miami’s new brand as a tech destination.

The sold-out conference had a cap of roughly 13,000 tickets, but the turnout is expected to be much larger, according to Albert Garcia, the chair of the Wynwood Business Improvement District. He expects there to be 50,000 visitors over the course of the two-day event, which begins Friday, in addition to the typical foot traffic in Wynwood, a once-industrial neighborhood famous for its street art, retail offerings and nightlife.

“Everything that we’ve seen now — international travel, opening back up — we’re the natural beneficiary of that because we have such an iconic outdoors,” Garcia said.

It’s the first event of this size in Wynwood since early 2020, and one of the first few events in Miami, which relaxed most COVID restrictions back in November. The conference organizers moved the event to Miami from its original location in Los Angeles back in March, because it was unclear whether Los Angeles would be ready to host an event of this size by the time the event arrived.

“It’s first-day-of-school vibes,” said Daniel Marquez, a graduate research assistant working on blockchain technology at the Massachusetts Institute of Technology. He was planning to drive down from Palm Beach, where he’s spent the pandemic, to attend the conference, and will be staying in Miami with friends who are flying in from the Midwest. “I’m fully vaccinated, Bitcoin is in the middle of a bull run; it’s just kind of an exciting place to go to and meet a lot of people I haven’t seen in a while, and learn and network,” Marquez said.

It’s not just luck that brought the conference to Wynwood. Miami’s mayor, Francis Suarez, has been championing the city as a tech center in general, and crypto hub in particular, capitalizing on the migration out of dense urban hubs like New York and San Francisco during the pandemic. “We want to be a city that focuses on the next series of technological advances: AI, of course crypto, biotech,” Suarez told CNBC Thursday. “That’s how we’re positioning ourselves.”

Just this week, the American Airlines Arena, home to the Miami Heat, transitioned to the FTX Arena, named for the cryptocurrency exchange that paid $200 million for the naming rights. And, on Thursday, Blockchain.com, another crypto exchange, announced it would move to Miami, and bring with it 300 new jobs, the Miami Herald reported.

Wynwood’s Garcia credited Suarez with helping make Miami attractive for the conference organizers, and for the community as a whole. “They saw a mayor that was on national TV saying ‘Come, come, come!,’” he said.

Moishe Mana, the founder of Mana Common, which owns the venue where the event is taking place, was also instrumental in bringing the conference to Miami.

“We have been pushing a crypto presence in Miami since 2018 and think it has a huge potential to revolutionize the way we work and interact with each other,” Mana said via email. “We saw an opportunity to bring in an event that contributes to Wynwood’s festival-like atmosphere and shows the world that this is more than just a moment for the city.”

Mana is himself a champion of the transformation of Miami into a tech hub. “New York had its time. There was a magic in the air for many years there that is now gone,” he said. “Miami has that magic.”

Mana made his fortune in New York, founding moving company Moishe’s Movers back in the 1980s, and then moved into real estate. He was an early investor in Manhattan’s Meatpacking District, which saw a transformation similar to Wynwood’s current one, from urban industrial neighborhood to trendy, upscale destination. “I helped revitalize the Meatpacking District, and I saw the potential there. Now I see that same potential in Miami and this is only the beginning of its success,” Mana said.

Other landlords and business owners in the area are looking forward to the influx. “We’ve decided to accept Bitcoin at all of our businesses this weekend, so that’s exciting in itself,” Sven Vogtland said Thursday. “I’ll accept my first Bitcoin payment tomorrow.” Vogtland owns popular taco spot Coyo Taco, an Asian food hall called 1-800-Lucky, and is part owner of the Oasis, a mixed-use campus in Wynwood that’s hosting multiple after-parties.

The conference features high-profile Bitcoin and crypto enthusiasts, such as Twitter founder Jack Dorsey, the Winklevoss twins, and skateboarding legend Tony Hawk. Bitcoin itself has had a volatile year, rallying all the way to $60,000 per coin, then falling back down below $40,000 in the first half of 2021. It has also seen more buy-in from institutional players, while showcasing its vulnerabilities, such as the tendency to move billions of dollars of value in reaction to Elon Musk tweets.

That hasn’t stopped the hordes of Bitcoin, or Dogecoin, or other crypto fans from descending on the streets of Wynwood — for the largest Bitcoin conference ever, as the organizers like to say.

“There’s a Roaring `20s vibe to it,” Marquez said. “Everything’s been suppressed for the last year, and now it’s opening up with the bang of Bitcoin 2021.”