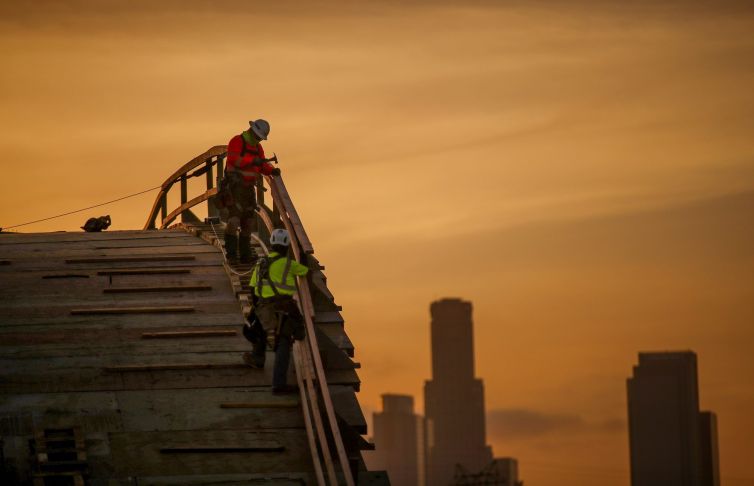 With a view of the Los Angeles skyline at sunset, a construction crew works on the Sixth Street Viaduct Replacement Project that crosses the 101 Freeway and Los Angeles River. The bridge is an on-going $588 million replacement project scheduled for completion in Summer of 2022. photo: Allen J. Schaben / Los Angeles Times

Southern California still has a ways to go before its real estate investment reaches the levels posted in 2019 before the pandemic hit.

Compared to the dark summer of 2020, regional investment volumes through July this year jumped 30 percent and surpassed $20 billion, according to data from CBRE and Real Capital Analytics. But that’s still below the $24.1 billion seen after the same amount of time in 2019.

And, worse, office and retail volumes are also down year over year, meaning those two sectors are faring worse this year than they did in 2020, when the pandemic nearly cut investment sales in half in Los Angeles County.

Despite the strains caused by the eviction moratoriums — leading to lawsuits at the state and local level — as well as the billions in back rent owed to landlords, apartments are still the favorite asset class. Multifamily sales so far this year have more than doubled compared to last year, and the asset class makes up about 36 percent of all investment in Southern California, according to CBRE.

This mirrors the situation playing out on the national stage, where landlord groups are grappling with President Joe Biden’s eviction moratorium, while also seeing booms in investment.

​​Industrial transaction volume also remains robust. The first half of 2021 was one of the busiest in recent history for L.A., when just the second quarter saw 9.8 million square feet of space leased. Warehouses reached record-low vacancy rates at about 1.9 percent, which gets even lower in the three submarkets closest to the ports.