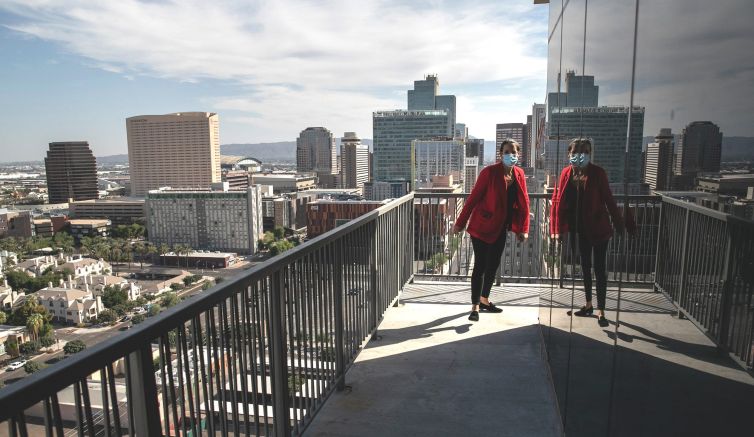 A property manager inspects a high rise apartment after a constable arrived to post an eviction order in Phoenix, Arizona. Thousands of court-ordered evictions continue nationwide despite a Centers for Disease Control (CDC) moratorium for renters impacted by the coronavirus pandemic. Although state and county officials say they have tried to educate the public on the protections, many renters remain unaware and fail to complete the necessary forms to remain in their homes. Photo: John Moore/Getty Images

As of Monday evening, the Biden administration said it “double-, triple- and quadruple-checked,” but were “unable to find the legal authority” for new, targeted eviction moratoriums. And the most recent addendum was “intended to be the final extension.”

Apparently, that’s no longer the case. Following an outcry from political leaders, the Centers for Disease Control and Prevention (CDC) on Tuesday again extended the national eviction ban, this time to Oct. 3, for counties with “substantial and high levels” of community transmission of coronavirus. As of Aug. 1, more than 80 percent of U.S. counties classified as having substantial or high levels of transmission.

CDC Director Rochelle Walensky signed the extension order, which determined that eviction for failure to pay rent could be detrimental to public health measures aimed at slowing the spread of COVID-19. The CDC argues that the moratorium is an effective measure that prevents the spread of disease, akin to practices like quarantine and social distancing. (As of mid-July, the Delta variant accounted for 82 percent of current COVID cases in the U.S.)

“The emergence of the Delta variant has led to a rapid acceleration of community transmission in the United States, putting more Americans at increased risk, especially if they are unvaccinated,” Walensky said in a statement. “This moratorium is the right thing to do to keep people in their homes and out of congregate settings where COVID-19 spreads. It is imperative that public health authorities act quickly to mitigate such an increase of evictions, which could increase the likelihood of new spikes in SARS-CoV-2 transmission. Such mass evictions and the attendant public health consequences would be very difficult to reverse.”

New York and California have established and extended their own moratoriums covering renters through Aug. 1 and Sept. 1, respectively. But, the CDC’s newest order would apply to both New York City and Los Angeles County based on how high their transmission rates are now.

The CDC extension is aimed at giving renters more time to secure government aid, or to get vaccinated. Indeed, a recent joint study from the University of California, Los Angeles (UCLA) and the University of Southern California (USC) showed many qualifying California renters had not received government assistance. Even worse, Florida received $1.4 billion in federal funding for tenants and landlords, but has barely distributed any of it.

In early March 2021, the U.S. Census Bureau‘s Household Pulse Survey estimated that 6.4 million households were behind on rent, and just under half of those fear imminent eviction.