LA’s Landlords Are Owed At Least $3B in Back Rent: Report

Hundreds of thousands of renters are in financial distress, with a rising share paying by credit card 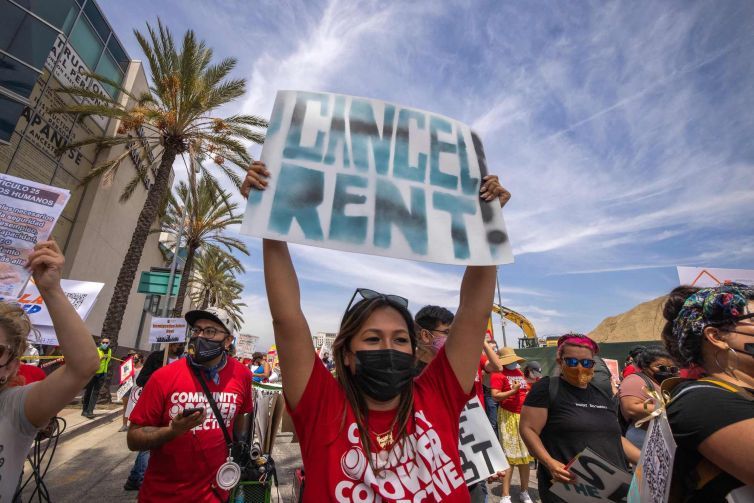 A woman calls for rent relief as a coalition of activist groups and labor unions participate in a May Day march for workers' and human rights earlier this year. Photo: DAVID MCNEW/AFP via Getty Images

Los Angeles County landlords are waiting on a pandemic-sized IOU.

A new survey found the median amount renters owe their landlords is $2,800, suggesting that tenants countywide owe landlords upward of $3 billion. The study by UCLA and USC researchers also shows how renters face financial distress that will be difficult to overcome.

The study includes data from two surveys of 1,000 households each, including one in July 2020 focused on renters’ ability to pay rent in the short term, and another in March 2021, asking about their ability to pay over the entirety of the pandemic. The report found the share of renter households that were unable to pay all of their rent during the pandemic increased to 49 percent.

In both surveys, about 7 percent of renters missed a full rent payment in at least one of the three months before the study was conducted. That’s equivalent to at least 135,000 households that missed an entire payment just in the first few months of 2021.

Renters’ debt also rose sharply at an alarming rate as the COVID-19 crisis dragged on. Only about 6 percent of L.A. tenants reported using a credit card to pay rent prior to the pandemic, but that figure rose to 19 percent in the early days of the emergency, and to 44 percent in the latest survey.

Also in the 2021 survey, 49 percent said they turned to friends and family to help them pay rent, 58 percent dipped into their savings, and another 37 percent reported taking out an emergency or payday loan.

The threat of eviction also grew over time. The first survey showed 6 percent of tenants reported in 2020 that an eviction had been initiated against them. In 2021, that percentage tripled to 18 percent. One in four who were behind in rent were threatened with eviction in the most recent survey.

Although California’s eviction moratorium will remain in place through at least September, tenants can still be threatened with evictions or have evictions initiated against them.

The study was co-authored by associate professors Michael Manville, Paavo Monkkonen and Michael Lens at the UCLA Luskin School of Public Affairs; and Richard Green, director of the USC Lusk Center for Real Estate.