Collections, vacancy and rent are at, or above, pre-pandemic levels and investors are all in 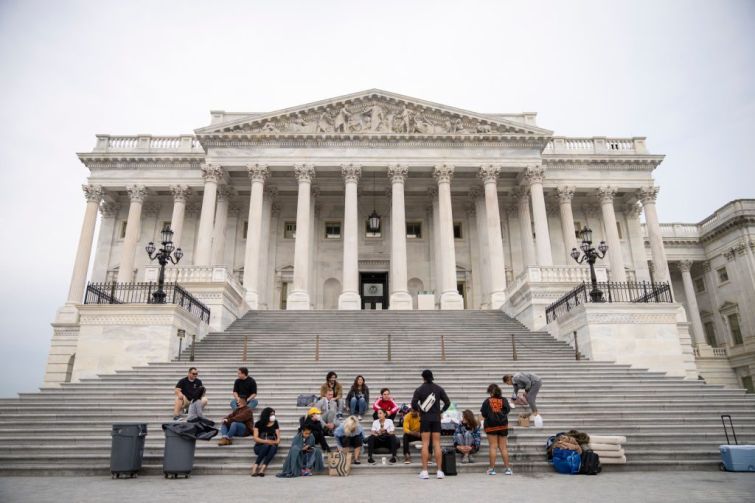 The night before the last federal eviction moratorium expired on July 31, U.S. Rep. Cori Bush (D-Mo.) slept on the U.S. Capitol steps in protest. Earlier that day, House Democrats had scrambled, and failed, to extend the expiration they knew was coming, after the Biden administration punted the issue to them.

“Many of my Democratic colleagues chose to go on vacation early today rather than staying to vote to keep people in their homes,” Bush tweeted.

Bush herself has experienced eviction three times. She once lived in her car with two small children, one an infant, and was evicted as recently as 2015 after getting involved in protests following the death of Michael Brown in Ferguson, Mo.

Other Democrats joined Bush, who slept on the Capitol steps again Saturday night and Sunday night, July 31 and Aug. 1, warning of the crisis that would befall millions of people if nothing was done to stop the expected wave of evictions.

On Aug. 5, the Biden administration, through the Centers for Disease Control and Prevention (CDC), issued a new eviction ban targeting counties where COVID-19 is widespread. Real estate groups cried foul, and immediately challenged the legality of the ban, citing an earlier U.S. Supreme Court decision that said the CDC did not have the authority to impose the first one — which lasted from September 2020 until July 31 — but let it stand through its expiration date.

As the drama unfolds, and both sides claim ruin if the ban does or does not stand, the broader multifamily market has been absolutely unmoved. In fact, multifamily as an asset class is a clear winner in this COVID-era economy.

“Multifamily and industrial have been, by far, the darling assets of the last 12 to 18 months,” said Seth Grossman, a debt broker with Meridian Capital Group.

The market is at its strongest in years. Prices are rising, capital is flowing, and deals are closing across practically all geographies, markets and property types.

That’s because throughout the pandemic, investors fled more uncertain assets like retail, hospitality and office for industrial and multifamily, which not only didn’t experience the same prolonged setbacks, but thrived.

“[Multifamily] is on fire. You keep thinking it can’t get more expensive, that cap rates can’t go lower and prices can’t go higher, and it just keeps going on. Something you bought a year ago and thought was expensive looks cheap now,” equity broker Marc Belsky told Commercial Observer in late July.

In the second quarter, $52.7 billion poured into multifamily across the country, a 34 percent increase from the first quarter of 2021, which was already robust, according to brokerage CBRE. Vacancy fell to 4 percent nationally, the lowest rate in two years, per the report.

That’s quite a turnaround from the very beginning of the pandemic, when it was unclear how long the shutdowns would last or how bad the economic effects of COVID would be. At the time, multifamily wasn’t seen as a safe asset class, and the eviction bans didn’t help.

“There was a massive fear when the moratorium went into effect,” Grossman said. “Landlords were thinking that people won’t pay, we won’t be able to cover our debt service … but that didn’t happen.”

Rents have gone up 3.5 percent nationwide, per the CBRE report, and rents had risen in most urban metros, which experienced the most precipitous falls last spring. Only 10 of 69 metros tracked by CBRE had not seen rents return to pre-pandemic levels.

These numbers suggest that the effects of the state and federal eviction moratoriums, and the tide of evictions expected once they lift, are isolated to a narrow segment of the multifamily market.

“On the deals we closed, it didn’t even come up,” Peter Ballance, a partner at law firm Stroock & Stroock & Lavan, said of the eviction ban. Ballance is based in Los Angeles and recently closed deals in Oregon, Texas, Tennessee and California. “The properties were still strong. It was just what I would expect absent this issue,” he said.

And it’s not just luxury or even market-rate housing. Brad Molotsky, a real estate attorney in the Philadelphia office of Duane Morris, who had worked on more than 15 multifamily new development deals over the last year, said it didn’t affect his work either. “Despite the pandemic and materials being an issue, and despite the evictions in the pike, there’s still a lot of people looking for affordable and workforce housing,” Molotsky said.

The same can be said on the financing side. There was a period last year, when the end of the pandemic was not yet in sight, that lenders were tightening their belts. Agency lenders and banks required additional reserves, reduced their leverage, and took higher vacancies in the underwriting, but those restrictions are gone now. In fact, it’s quite the opposite, Meridian Capital Group’s Grossman said.

“We are literally in the most aggressive multi lending market, maybe, ever — definitely in the last 15 years — where lenders are very bullish,” he said. “People are writing good loans, but they’re being very active putting out capital. There are very good terms for strong multifamily, more favorable to borrowers than before pre-COVID.”

Of course, even if the eviction bans don’t affect the majority of tenants and landlords, and the vast majority of investors and lenders, the impact on those they do affect can be devastating or salvational, depending on what side of the line you’re on.

“We’re looking at an avalanche of evictions that are about to happen,” Dr. Rajni Shankar-Brown, a professor of social justice at Stetson University, said before the CDC moratorium lapsed and was reinstituted. “Our numbers in terms of homelessness were already unacceptably high, and now in the midst of a global pandemic, it is deeply distressing and a horrifying situation.”

In fact, some see this as a way to question the system more broadly. The day before her protest at the Capitol steps began, Bush introduced legislation in the House called, “The Unhoused Bill of Rights,” which legislates an end to homelessness, arguing that homelessness is a policy failure, not a personal one. “The unhoused crisis in our country is a public health emergency, and a moral and policy failure at every level of our government,” she said at the time.

On the flip side, many are opposed to the continuation of the federal eviction ban.

A large coalition of real estate groups, led by the CRE Financial Council, issued a joint statement criticizing the moratorium extension: “The recent CDC order will leave rental housing providers in legal limbo while many renters continue to accrue more and more back rent and face a mounting debt cliff.

“The best way to help struggling renters is for the administration to work with Congress, states and localities to help disburse rental assistance funds to residents and housing providers in need.”

Some landlords certainly agree. “The government’s role is to help [tenants] pay the rent, not have the landlords pay the rent,” said one New York City landlord, who said his business was not affected by the ban.

Congress has, in fact, earmarked a total of $46 billion for rental aid, to be distributed by states and local governments to tenants and landlords. But, the distribution has been painfully slow: Just 6.5 percent of that money had been distributed by late July, according to the U.S. Department of the Treasury. In Florida, which was awarded $871 million, just $1.5 million had been distributed. Local governments in the state, who had separately been awarded $570 million, had distributed $109 million — higher than the national average, but still just 19 percent.

One justification for the new federal moratorium is to allow local governments more time to get the money to tenants and landlords.

But, regardless of whether the moratorium will stand or perhaps be extended again, and who stands to benefit if it does, one thing is certain for now: Real estate investors want in on multifamily, and they’re betting that
most tenants will pay their rent on time and in full.