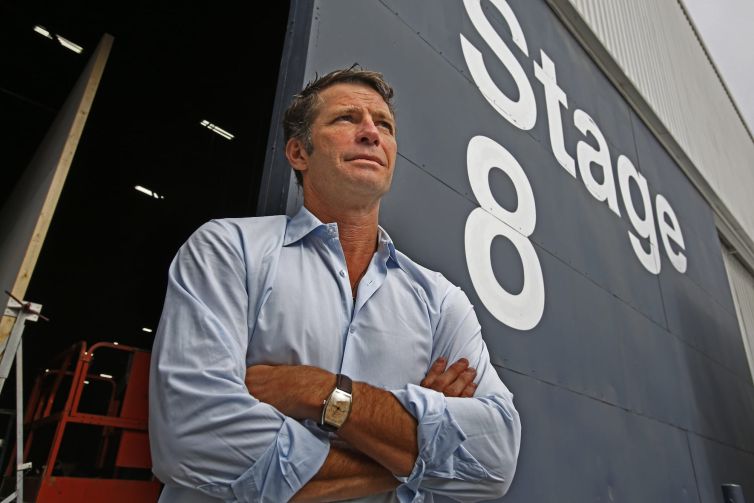 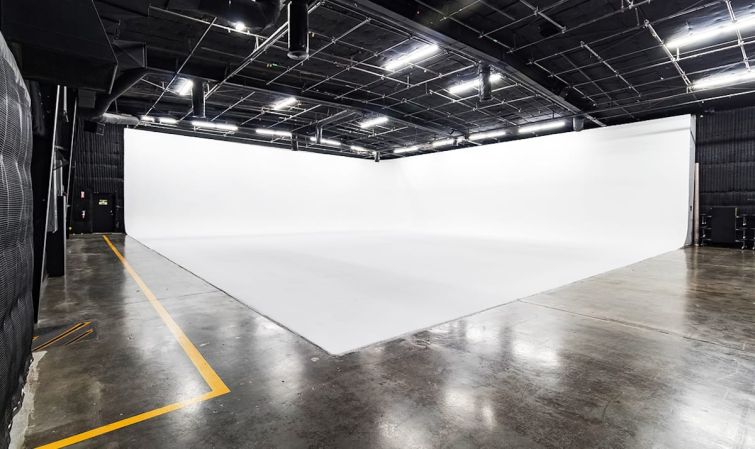 Mikel Elliott and Jordan Kitaen's side hustle became one of L.A.’s top service providers for film production, and then it evolved into the firm it is today: transforming properties into studios and soundstages and managing ancillary equipment facilities, where it offers rentals on everything from trucks and trailers to lighting and supplies. photo: Quixote Studios 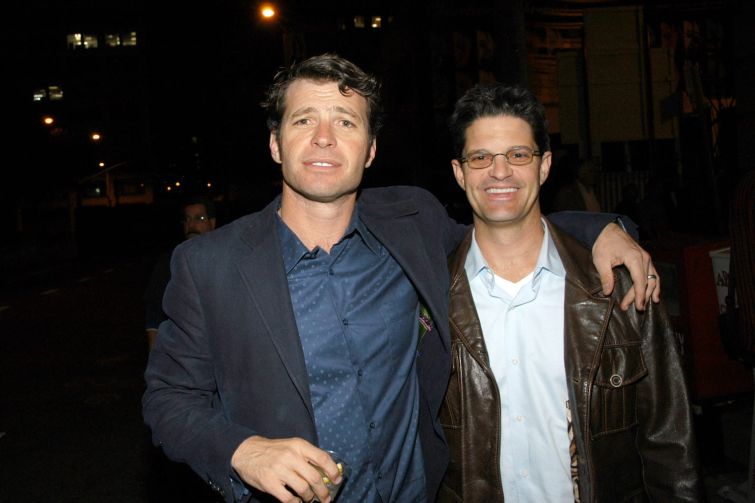 To take advantage of the rampant space race spawned by the “streaming wars,” Quixote Studios is also transforming more industrial properties into soundstages, and sometimes competing with the top landlords and service providers in Hollywood. Last month, the company signed a lease for almost 124,000 square feet in the San Fernando Valley — next to another one of its other production campuses that made a splash when it opened two years ago — with premier warehouse landlord, L.A.-based Rexford Industrial Realty, where it will convert 95,400 square feet into four soundstages.

Quixote’s co-founder describes the firm almost as a real estate company that services the film industry because it’s so dependent on content creation space. But the growing company has evolved from a much, much smaller operation.

Almost three decades ago, two UCLA graduates needed a side hustle to make ends meet while they pursued dreams of becoming a movie producer and writer. But rather than wait tables, Mikel Elliott and Jordan Kitaen bought a motorhome and drove commercial photographers from shoot to shoot.

“We got this idea to buy these motorhomes and customize them mainly for photo shoots and commercials,” Kitaen told Commercial Observer. “Then we started buying and building more, and at some point we said, this is really the lowest lying fruit.”

That side hustle became one of L.A.’s top service providers for film production, and then it evolved into the firm it is today: transforming properties into soundstages and managing ancillary equipment facilities, where it offers rentals on everything from trucks and trailers to lighting and grip equipment.

Kitaen said they expanded out of L.A. when “runaway production” happened — which came when other states introduced unprecedented tax breaks, and successfully pulled productions away from Southern California to places like Georgia, Louisiana, and Canada — and Quixote chased the incentives. The firm operates in markets including Hollywood, West Hollywood, Griffith Park, the northern-most parts of the San Fernando Valley, and out in New Orleans.

The firm has converted or transformed warehouse space into studios in the past, but over the past four years, it has gotten more aggressive with the strategy back in its hometown after “this streaming thing started to take off,” Elliot said.

“Once you see that you can get Apple and Disney and Netflix, and all of it is based here, it’s a different game,” he said.

Now, Elliot is advocating to bring more of the filming industry back to L.A., and he started a #NoPlaceLikeHome campaign to gain support. The firm brought back much of its transportation assets from Georgia to service L.A., which Elliot said gets close to 40 percent of the total production work in the country.

“We want to continue to build up the infrastructure here in L.A., and try to keep as much of that here,” Elliott, Quixote’s CEO, said. “The more infrastructure we have, the more we keep T.V. out of Vancouver or from going to some of those other states. That’s the plan over the next few years.”

Kitaen was Quixote’s president for about 16 years and managed its real estate needs. He is still on the board, but no longer handles their day-to-day operations. Instead, he joined CBRE’s studio advisory services team.

“Quixote is very bullish on L.A., with runaway production sort of running back the other direction,” he said. “It’s actually sort of equalized. There’s plenty of work going elsewhere, and it’s enough to sustain several other markets. There’s just so much more work now, but L.A. is taking the lion’s share.”

Right on Cue
Two separate sectors in L.A. — industrial space and studio space — are notably thriving in the face of the economic downturn, and they’re converging to accommodate firms like Quixote Studios.

Warehouse and logistics properties are experiencing record-high demand thanks in part to the growth of online shopping. And while landlords like Rexford are building out properties to take advantage of one sector, they find a surprising tenant match with companies like Quixote in the other.

With the bottleneck in production, and a supply-demand imbalance for content creation space, studio users are betting more on secondary markets to convert industrial properties into soundstages. For example, Quixote leases a portion of a building at the corner of Cobalt Street and Bradley Avenue in Sylmar that’s owned by industrial powerhouse Prologis.

“For landlords, the serendipity is uncanny,” Kitaen said.

The reason studio operators are looking to warehouses: there’s no space. Indeed, Rexford’s property was the only available building larger than 100,000 square feet in the greater San Fernando Valley.

“There’s really no land available to do purpose built stage development,” said Greg Barsamian, leader of CBRE’s studio advisory team. “The alternative is to look for buildings that can be adapted to stage. And there’s not a lot of that either. […] But with high ceilings, they provide an alternative and easy conversion for studios, especially for television. They install an internal steel framework so they can remove interior support columns.”

Barsamian and Elliot said another major advantage is the shorter time needed for entitlements, which is “usually none” for these conversions.

“You can either build from the ground up, or you can be opportunistic and take down buildings that you can convert,” Elliot said. “To scale, it’s really hard to find a piece of dirt and have purpose built and get them up on time, where acquisition to completion takes about three to four years. These things you can get done in under a year and get them on the market. […] As long as there’s enough height, we can do the rest of it for the most part.”

Quixote’s other Pacoima property was built as a shell by industrial firm Xebec, which originally planned for it to be a last-mile warehouse for e-commerce companies. Instead, the firm signed Quixote, which completed all the tenant improvements, and the building opened with five soundstages and 20,000 square feet of office space in 2019. It was Xebec’s first move in the studio space.

“We’re very active redeveloping the Pacoima area,” Elliot said. “They were all poor old properties, and now they are turning Pacoima into more of a destination. We have more than 20 acres either owned or master-leased there.”

Quixote isn’t the only one tapping into industrial properties. L.A. North Studios converted a 143,000-square-foot warehouse at 25045 Avenue Tibbitts into a three-stage studio. However, with the e-commerce industry showing no signs of slowing down, it means these studio operators looking for industrial conversions have to elbow their way into a battle with behemoth manufacturers and distributors like Amazon or Walmart.

“Yeah, that’s not great,” Kitaen said. “It’s difficult to compete for space and find these places for conversions.”

The Return of the Camera
As California administers more vaccines, more filming is underway, and leasing is expected to soar. FilmLA, the nonprofit that manages film permitting for L.A. County, reported that application activity jumped 45 percent in March.

For Quixote, its studios in West Hollywood, Pacoima, and two at Griffith Park are now open for bookings. Its Sylmar studios, at the northernmost tip of L.A., are set to open June 1.

But even with an influx of millions of square feet for new studio space, Elliot said he expects to be very busy this year, and that more expansion is on the horizon. The firm developed a software that collects slates from each public production company regarding plans for filming over the next couple years. The program extrapolates the number of productions by type — features, TV, reality, game show, sitcom — and uses historic patterns (for how much share L.A. usually gets) to predict how many stages will be needed in L.A.

“All we need to do is keep up with inventory,” Elliot said.