On a Quixotic Quest for Hollywood North

A new 75,000-square-foot production studio in Pacoima blurs the boundaries on Hollywood 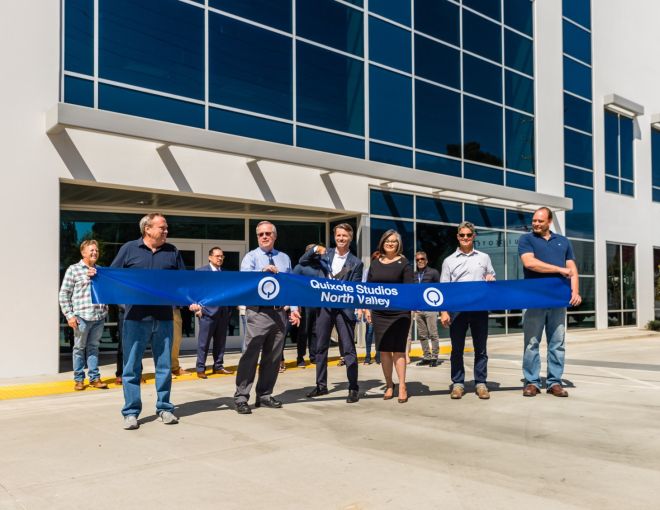 Mikel Elliott (center), the CEO of Quixote Studios, is flanked by colleagues and local officials as he cuts the ribbon at its new facility in North Los Angeles. Photo: Quixote.

The mid-summer scene was like so many that have played out in Los Angeles before: a ribbon-cutting for a new state-of-the art production studio, a smattering of film execs and local politicians, polite talk about the streaming service wars and the future of the entertainment industry.

What was different was the setting. The August event was hosted for the opening of Quixote Studios North Valley, a $25 million, 75,000-square-foot facility in a tiny neighborhood on the northern edge of L.A.’s city limits called Pacoima.

That’s right, not Burbank, Hollywood or even North Hollywood: Pacoima.

“We’ve struggled to find locations for filming in the Los Angeles area, so opening stages like this really gives us an opportunity to continue promoting Los Angeles as a destination for film,” FilmLA president Paul Audley, who attended the opening, said in a statement.

The studio, developed and owned by industrial firm Xebec, hosts five sound stages and 20,000 square feet of production office space. The property, at 10445 Glenoaks Boulevard, is situated on 10 acres located a roughly 30-minute drive from Hollywood. The drive, going north on Interstate 5, takes you past Glendale and Burbank and into the heart of a six-square-mile neighborhood marked by its economic ups-and-downs.

“For the Northeast San Fernando Valley, this is huge,” said Los Angeles City Councilwoman Monica Rodriquez, who also attended the opening and whose district includes the new studio.

Pacoima’s debut shows how areas outside of Hollywood are seeking to get a piece of the action as the demand for filming space, driven by an explosion in streaming content, runs up against a dearth of industrial space, let alone industrial space customized to serve Hollywood productions. Further north, the city of Santa Clarita has also gotten in on the expansion with firms like Illumination Dynamics, L.A. North Studios and Elite Media Technologies making big moves in the space.

Quixote, which has stages and equipment facilities throughout Los Angeles, New York, New Orleans and Georgia, was drawn to the North Valley studios in response to peak TV demand. The campus has already seen some leasing wins: Amazon’s horror anthology series “Them: Covenant,” which is executive produced by Lena Waithe of “The Chi” and “Master of None” fame, has already signed on to film two seasons at Quixote Studios North.

“We built these stages in Pacoima because it was a perfect combination of land affordability and proximity,” Mikel Elliott, CEO of Quixote, said at the opening ceremony. “We see this section of the Valley as a production hub in the years to come, and there will be hundreds of jobs created right here on these stages.”

Dallas-based Xebec originally planned to build a last-mile warehouse targeting e-commerce companies at the site, according to Gretchen Kendrick, COO at Xebec. Kendrick, along with her husband CEO Randy Kendrick, are part-owners of Sun Valley Business Center, the gigantic 255,528-square-foot warehouse in the East Valley leased to Amazon contractor OnTrac.

The firm pivoted to building for film production, its first foray into the space, because it was sold on Elliott’s vision, she said. The construction took about two and a half years to complete, with Quixote signing on for a 10-year lease with options to extend.

“The building is designed so that if Quixote closes, it could become an industrial space,” Kendrick said. Not that the firm is having second doubts; Xebec has since been inspired to look into building more such projects in North L.A.

“We couldn’t be more excited about it,” Kendrick said. “It’s a gorgeous building.”

On Quixote’s end, the firm was already familiar with Pacoima, as it houses some of its equipment operations in the area, and was sold on a variety of its factors, Elliott told Commercial Observer.

“The strange combination of affordable land and land to park on, man,” Elliott said. “You need big buildings, 40-foot-high ceilings, and you need a ton of parking — [that’s] hard to find that unless you intend to purpose-build it.”

He added that Pacoima’s proximity to Hollywood is “pretty damn good,” with easy access to the 170 and five freeways.

According to a Motion Picture Association of America report released in March 2018, the world’s entertainment market — encompassing both theatrical and home releases — grew to a new high in 2018: $96.8 billion, a 9 percent increase from 2017 levels. A substantial chunk of that growth came from the rise of streaming video, which blew up to 613.3 million subscriptions worldwide; a year-over-year increase of 27 percent.

More streaming content is being created than ever before, largely to support the appetite of streaming giants such as Netflix, Amazon and Hulu, while new entrants to the market include Apple, Disney, NBC Universal and WarnerMedia, with the firms spending hundreds of millions on original programming.

Among the industry players are Illumination Dynamics, which is relocating its corporate offices and operations to the area from Sun Valley. The firm provides lighting, grip and power distribution services to the live entertainment industry.

The firm is moving into a new development from Trammell Crow Company and Clarion, with the company taking up a 67,639-square-foot warehouse at the six-building site called The Center at Needham Ranch.

“Our new state-of-the art facility will allow us to continue to provide outstanding service to our customers with tremendous access throughout Southern California and beyond,” said Carly Barber, president of Illumination Dynamics in a statement.

Another new entrant to the Santa Clarita area is L.A. North Studios, formerly known as Triscenic Studios, which began operations at the start of January. The company converted a 143,000-square-foot warehouse, located at 25045 Avenue Tibbitts, into a three-stage studio that offers space for film production, mill space and production offices.

“We took the building, converting the warehouse portion into production for the entertainment industry,” said John Prabhu, a partner at L.A. North Studios.

Prabhu praised the city of Santa Clarita and its local officials as an industry-savvy, business-friendly community.

“They’re very pro-film,” he said. “They give you the road map. They’ve been very helpful. It’s not an easy thing to achieve,” he said, referring to the warehouse conversion.

The job included parking considerations, sound attenuation and structuring the roof load to carry the rigging and power systems required for each soundstage, which scales 35 feet high.

Prabhu never intended to get into showbiz, so to speak.

“I’m a real estate person by background,” said Prabhu, who for 28 years worked as president of the commercial real estate division in Beverly Hills at Kennedy Wilson. “I wanted to go out on my own.”

“This opportunity came about over a dinner,” he continued. “It was intriguing from a real estate standpoint. I know a fair amount of people in the entertainment industry.”

That meal was with Vince Gerdasi of Triscenic Production Services, which provides scenery, set storage and movie-related transportation and is a prolific owner of buildings in Santa Clarita and its southern neighbor, Sylmar. The two eventually partnered with Anthony Syracuse, of Syracuse Construction in Valencia, on L.A. North.

“It’s a lot of work but very fulfilling,” Prabhu said. “I can understand why it’s not for everybody. You have to manage your occupancy. You’re signing people for two, five, 10 months. You’re constantly turning your sound stages.”

In December, Elite Media bolted from its Burbank home of eight years to 26320 Diamond Place in Santa Clarita. The relocation proved beneficial as space in Burbank is tapped out and Santa Clarita’s Valencia neighborhood is seeing more production sites, Mairose said.

“The more people we’ve gotten through the facility and made the impression, the better,” he said. In places like Burbank or Hollywood, “there’s not much available space and the buildings are older.”

Prabhu agrees that Santa Clarita is geographically ideal, located within 30 miles of Hollywood and surrounded by housing, amenities and restaurants.

Mairose, who’s been in the digital streaming business for more than a decade, said business has markedly increased over the last five years thanks to Netflix, Amazon and Apple.

“The business is nearly completely different [than] when we first started,” said Mairose, who co-founded Elite in 2010. “We were doing a lot more tape-based, and now [it’s] all file-based electronic.” The firm does mastering and finishing work and has provided deliverables for clients like Netflix, Hulu, Amazon, Showtime, and CBS.

“The new file-based platforms and [over-the-top] platforms have ramped business way up,” he said.

And with everything going digital, more and more work can be filed remotely, Mairose said.

“It allows for people to operate somewhere,” he said. “You don’t need to be near somebody’s studio in Hollywood or West L.A.”