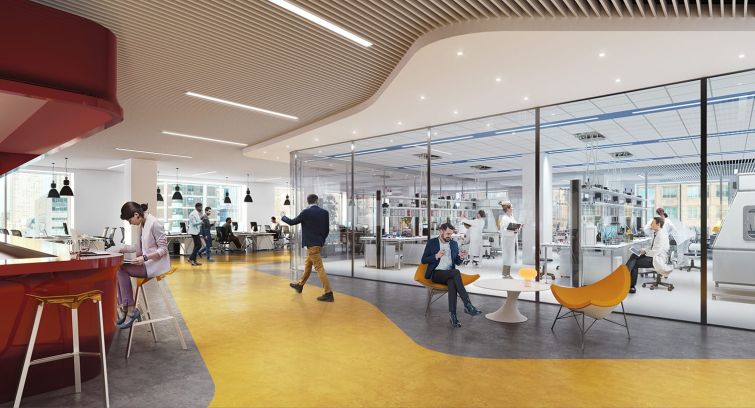 A look at potential lab and office space for life science tenants at 125 West End Avenue. Rendering: Perkins + Will

Leasing for the life sciences sector more than doubled around New York City between 2019 to 2020, reaching its highest level in nearly a decade, a report from CBRE found.

All told, life sciences companies took 155,925 square feet of laboratory and other-related space around the city, the largest amount since at least 2011, according to the report. The bulk of that was in Manhattan, with 137,925 square feet leased in the borough. Contrast this with office leasing, which plunged 56 percent annually in 2020 in Manhattan.

What was especially positive for the sector was that the activity was driven by a whole crop of new life sciences firms moving to the city, said Steve Purpura, head of CBRE’s life sciences division.

The life sciences sector in New York City totaled 42 tenants at the start of 2020. That number grew to 59 at the end of the year, CBRE’s report found.

While the coronavirus pandemic decimated other industries — especially the retail and hospitality markets — it proved a shot in the arm for life sciences. The race for COVID-19 therapeutics and vaccines erased a lot of government bureaucracy for the industry, with some hopeful it won’t come back. Meanwhile, investors have flocked to throw money around.

In New York City alone, funding from venture capital firms into life sciences totaled $907 million last year, its highest yearly amount ever, according to CBRE. And National Institutes of Health funding for companies in the city increased to $2.28 billion, the fifth year in a row that that number grew.

The life sciences market was growing pre-COVID — especially in places like San Francisco and Boston — but was held back in New York City due to a lack of available lab space, which hinders fast-growing companies who routinely need to upgrade to bigger digs, Purpura said.

“If you’re a newer company and you’re in a smaller lab, and you have some breakthrough that leads to some major influx of capital, you’re not going to want to wait 18 months for new lab space to be built,” Purpura said.

“Boston suffers from a lack of supply and availability,” Purpura said. “We have incredible availability for the next 18 months.”

Even with New York City’s life sciences market booming, it’s still far behind the likes of Boston. Last year, firms absorbed 889,000 square feet of the life sciences space net in the Boston area, according to a report by Newmark. And, even if finding such space becomes tougher in Boston, the market still has 1.3 million square feet of life sciences under development.

Still, the increased demand, due in no small part to the pandemic, means that the sector is primed to move past the primary clusters like Boston, San Francisco and San Diego to secondary ones like New York, Raleigh-Durham and Austin — and even beyond. Purpura and others say companies are now starting to look to places like Philadelphia, Chicago, Atlanta and Pittsburgh for space.

While owners and landlords might want to rush to add life sciences for its portfolio, Purpura warned it’s not that easy. “I think everyone loves to hear and talk about life science,” he said. “It’s hard. It’s not for every building, it’s complicated infrastructure.”

Nuveen’s Nadir Settles, who’s in charge of the global asset manager’s New York City portfolio, previously told CO that owners need to understand what life sciences tenants look for in lab spaces and find the right buildings to be able to support them.

“You can’t just say this building is functionally obsolete, let me just take it, knock it down, and rebuild it as life science,” he said. “You have to be able to salvage some of the bones. For instance, the building at 125 West End used to be a Chrysler showroom, so you could understand how that was the right floor load, it had the right physical infrastructure.”