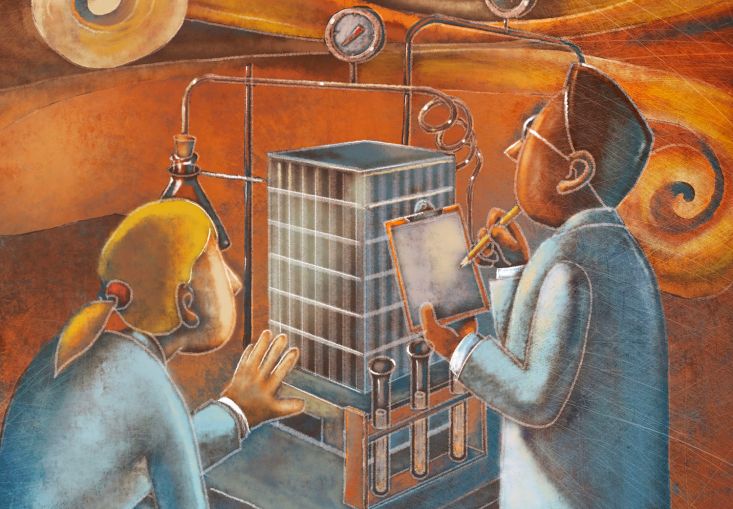 Life science is on fire, even before COVID-19. Illustration by Matthew Baek.

On an April 28 earnings call, as the coronavirus pandemic swept across the United States, Joel Marcus of Alexandria Real Estate Equities, a leading developer of life sciences and technology spaces, cut to the chase.

“While most industries are adversely affected by acute changes in consumer demand, this is not the case for biopharma as the need for new medicines is fundamental to our human condition,” Marcus, the founder and executive chairman of Alexandria, told listeners. “This discrepancy is one of the reasons why biopharma outperformed other sectors during the great financial crisis and the tech bubble crash of 2001.”

Indeed, if there was one sector of the commercial real estate market weathering the pandemic the best—and poised to continue to do so—it was life sciences.

The sector that includes pharmaceutical, medical, telemedical, and biotechnology companies was doing well even before the coronavirus struck, occupying ever more office and lab space in key markets such as Boston, San Francisco, and New York; and the same dynamics are now joining with new demand for therapeutics and vaccinations to fight COVID-19.

In late July 2019, developers DLJ Real Estate Capital Partners and Leggat McCall started construction on a nine-story, 289,000-square-foot life sciences project at 101 South Street in Somerville, a city of around 81,000 just northwest of Boston. The project, part of a larger mixed-use one, is due to fill in parking lots, scrap yards, and industrial properties.

Most importantly, perhaps, 101 South is advancing despite the pandemic; construction resumed around June 1, following a construction moratorium in Somerville—and it’s being built without any tenants lined up. The project is indicative then of the allure of life sciences for developers, including, and perhaps especially because of, the pandemic. Even in an area that was an industrial afterthought and even on spec, the prospect holds strong potential for returns through strong demand.

That’s because the life sciences industry has grown by pretty much any measure over the past decade. Or, as a Cushman & Wakefield report from earlier this year put it, “Follow the money, follow the research, and you find the jobs.”

First, that money. Life sciences proved a particular darling of venture capital during the markets’ recently ended bull run, according to C&W. VC investment in the industry grew to $17.4 billion in 2019 from $3.7 billion in 2008. Most of this funding went toward commercializing the devices and pharmaceutical innovations life sciences firms develop.

On the research side, the funding has also been robustly multiplicative. The National Institutes of Health granted $124 billion to industry firms from 2014 to 2019. Institutions in Boston and New York received the most. In 2018 alone, the government clearinghouse made $28.1 billion in research grants.

But the NIH and VC fountains aren’t even the biggest sources; that has been the research and development wings of private companies themselves, largely pharmaceutical firms, the C&W report said. R&D spending hit $154.5 billion in 2019, a 40 percent increase from 2012.

The potential marketplace justifies the investment, according to analyses. The one thing they all point to is the aging of the U.S. population. An estimated 10,000 people were turning 65 every day by 2019, according to census data, and 21 percent of the U.S. population is expected to be at least that age by 2030. That is a lot of potential customers for life-sustaining and life-enhancing medications and machines.

Analyses also point to different technologies that have evolved over the past decade, in particular those related to artificial intelligence and cell and gene therapies. “These innovations are forecast to maintain their momentum with double-digit growth in global market capitalization in the next five years,” the C&W report said.

This potential and the funding behind it have led to a boom in life sciences jobs. For 20 years starting in 1990, employment in the sector grew 1 percent annually versus 0.9 percent for job growth for the entire U.S. Since 2013, though, life sciences job growth has increased by about 7.5 percent a year, according to C&W.

There are now well over 200,000 such jobs nationally—most of them concentrated in some of the most expensive real estate markets. In fact, more than two-thirds of life sciences jobs were in just 11 metros by the end of 2019, with Greater Boston, the San Francisco Bay Area, and the San Diego area hosting the most by far. Philadelphia, northern New Jersey, the Washington area, Seattle, North Carolina’s Raleigh-Durham, Chicago, New York City, and Baltimore round out the list.

Finally, life sciences leasing has been especially brisk in these towns too. In Greater Boston, the amount of office space under active leasing nearly doubled, to 22.1 million square feet, from 2010 to 2020, according to a Costar analysis for CO that included botanical manufacturers and dental and medical supply wholesalers. In the San Francisco area, the percentage increase was similar over that period, to nearly 9 million square feet, and, in metro New York, the share went to 8.2 million square feet from 7.7 million square feet.

In fact, even in areas that didn’t see the sharpest job growth, the office leasing was brisk. In Austin, for instance, the volume of life science space under lease shot to 755,000-plus square feet in 2020 from just under 191,000 square feet, according to Costar.

Shot in the arm

Not surprisingly, the strongest demand for new life sciences space is strongest in a relative handful of regions—and that demand is expected to easily survive beyond the pandemic-induced downturn.

That’s in part because life sciences is unlikely to follow other industries such as finance and tech in shedding office space as they shift more employees to working remotely. It’s not just that life sciences is buoyed by high demand and investment —mass telecommuting is also impractical in an industry that requires so much laboratory work and brainstorming, observers say.

The development and the leasing, then, continue in these select cities, maybe even more so due to the race for treatments for the coronavirus. Market research firms Life Science Intelligence and Health Research International together predict “massive growth in the global drug delivery markets” due largely to the pandemic, for instance, and brokers do not anticipate much more than a hiccup in terms of leasing for the same primary reason.

“There’s probably going to be increased demand in the short-term,” said William Hartman, an executive managing director at C&W. “What we’ve seen is a pause button but not a real big pause button.”

Hartman said in late May that he knew of 15 to 20 firms looking for life sciences space in New York City. “Almost without exception, everyone’s moving as fast as they can forward,” he said.

Meanwhile, it’s as if observers can throw a dart at a map of the U.S. and hit a new life sciences development. Irvine, Calif., REIT Healthpeak Properties recently announced progress on projects in Houston, South San Francisco, and San Diego. In New York, projects such as Deerfield’s nearly 327,000-square-foot redevelopment of 345 Park Avenue South and Janus Property’s 350,000-square-foot conversion of a former bakery at 450 West 126th Street continue marching toward completion.

In Greater Boston, life sciences space is part of several projects, each hoping to wrest some of the luster from the region’s reigning biotech hub, Kendall Square around the Massachusetts Institute of Technology, which currently boasts tenants such as Amgen, Biogen, and Bristol Meyers Squibb.

These projects include a potentially 250,000-square-foot development in Boston’s Seaport District. It’s the first project by Breakthrough Properties, a partnership between developer Tishman Speyer and Bellco Capital, an investment firm founded by a pair of biotechnology entrepreneurs. The project is expected to open in 2021, as originally announced. Like with 101 South in nearby Somerville, it does not have any tenants lined up yet—a sign of commercial real estate professionals’ bullishness on the sector even amid the pandemic.

In San Francisco and neighboring San Mateo County, more than 1 million square feet came online in 2019, with “much more to come,” according to the same report. And, in Greater Boston, perhaps the nation’s life sciences capital, as much as 32 million new square feet could come online, dwarfing the 20.6 million square feet there as of 2020.

In the end, the only thing that might derail such growth is a downturn in investment. That appears far from certain, though. VC investment in particular continued strongly through the first quarter, even as the pandemic took hold; and the median VC investment in life sciences is expected to stay steady in 2020—$4 million vs. $4.2 million in 2019—according to a National Venture Capital Association’s first-quarter PitchBook report.

“If nothing else has happened,” C&W’s Hartman said, “the world has realized how important the industry is.”