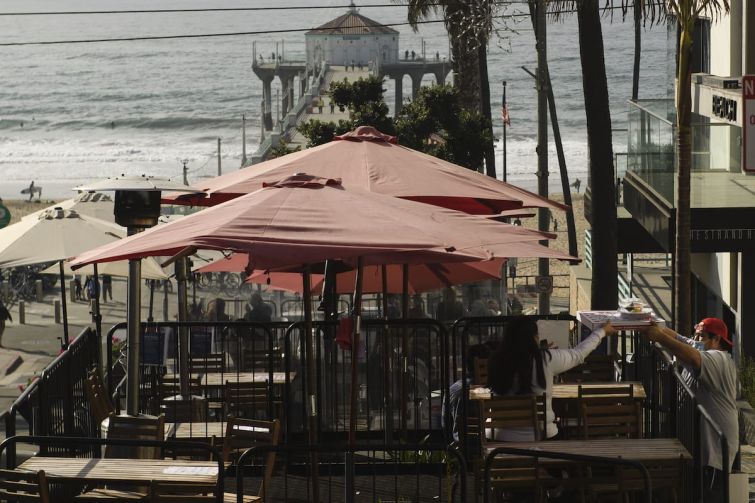 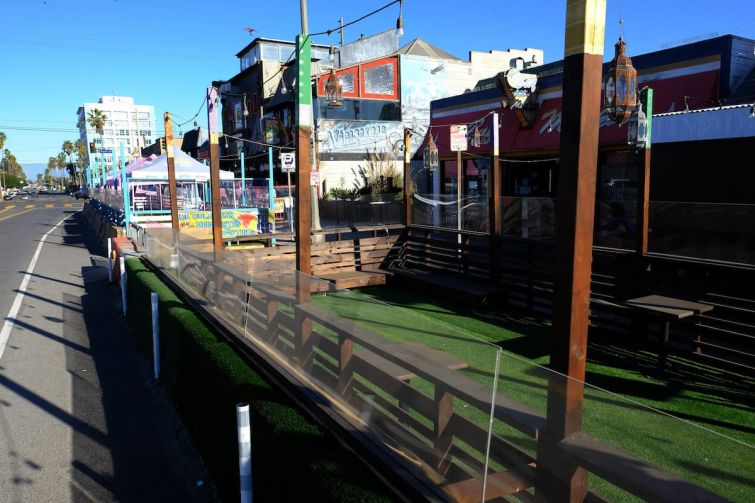 Recently constructed outdoor dining areas are seen deserted on Dec. 19 in Venice. In an effort to contain the rapid surge in coronavirus cases, Los Angeles County has enacted a "Safer at Home" emergency order limiting restaurants to takeout and delivery service only. Photo: Amanda Edwards/Getty Images
Previous Next

A Los Angeles restaurant owner filed a lawsuit in federal court against Gov. Gavin Newsom this week over the state’s latest ban on outdoor dining. The owner went viral recently with a social media post describing her business’ financial struggles due to forced coronavirus restrictions, even while a similar outdoor eating area stood about 20 feet away for a Hollywood movie crew.

Representing the restaurant’s owner, a legal team led by Mark Geragos wants to overturn the new restrictions on restaurants, the L.A. Times reported. The state’s new stay-at-home order limits restaurants to takeout service only as part of the larger effort to curb the spreading coronavirus.

The restrictions were triggered earlier this month after Southern California’s ICU availability dropped below 15 percent. Last week, the ICU availability fell to 0 percent, and Wednesday was the deadliest day of the pandemic for L.A. County.

But the lawsuit challenges the science behind the decision to close outdoor dining. The plaintiffs argue Newsom doesn’t have the authority to close restaurants, and that there is not enough evidence to support the theory that closing outdoor dining will control the spread. The group also said the stay-at-home order means owners can’t “fully utilize … leased property by serving … the general public.”

California deems filming an essential business and it’s allowed to continue under state guidelines. Marsden’s lawsuit mentioned “a major Hollywood production was recently in full operation, where it had an outdoor tent set up and was permitted to serve meals…” 20 feet from the Sherman Oaks restaurant.

The governor’s press office did not respond to requests for comment.

Newsom and county health officials have struggled with different sectors throughout the year as separate surges in cases of coronavirus hit the state. For example, local politicians called for theme parks like Disneyland to reopen sooner, while shopping center landlords and Unibail-Rodamco-Westfield — the largest operator of indoor malls in the region — filed lawsuits against the county demanding they be allowed to reopen.

Geragos also owns a restaurant in Downtown L.A., and he and the California Restaurant Association successfully argued that L.A. County shouldn’t be allowed to continue its ban indefinitely. A judge also ruled that the county would need to provide a risk-benefit analysis to justify the restrictions, although the county appealed that decision.

For months, restaurateurs and retail landlords have been asking for additional stimulus from the federal government while state and local officials continue to restrict businesses for longer than originally anticipated. A stimulus plan was expected to be approved this week after gaining Congress’ support, but President Donald Trump announced he is ready to veto the plan in its current form, again delaying aid to industries watching their businesses sink.