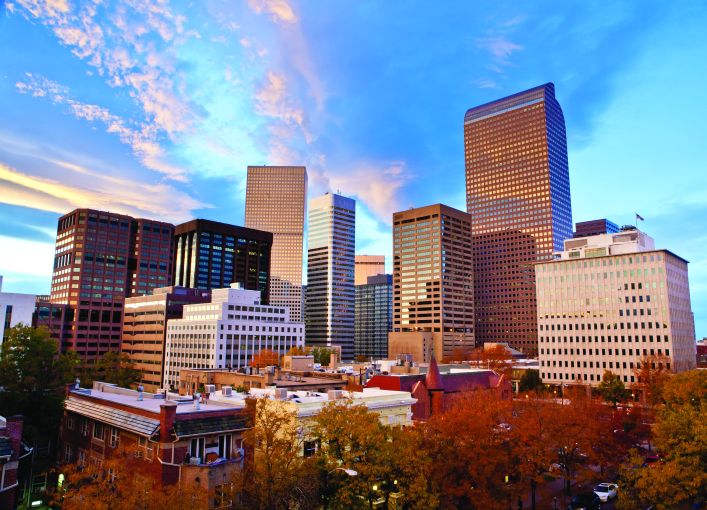 Investors are looking at areas in the Mountain West—like Denver, pictured—and the Sun Belt as safe havens for investing during the pandemic. Photo: Getty Images

As the coronavirus continues to rock the biggest and most profitable cities in the country, investors and lenders alike are scouring secondary markets for safe havens — or investments that won’t lose value when the market gets rough.

Forget the gateways. (Well, there’s one you can keep. More on that in a minute.) New York City is suffering from a glut of not just new construction, but also a whole new wave of subleasing. Same story for Washington, D.C. Last month, Commercial Observer reported that Los Angeles office leasing is down some 61 percent from 2019.

Real estate pros looking to de-risk during the coronavirus pandemic should look in the Sun Belt and the Mountain West, finance executives told CO. Here are the top five markets to investigate:

The third-largest city in Texas is reprising its role as a late-19th-century boomtown, as it attracts major companies searching for cheaper office space that are largely priced out of more expensive West Coast markets like San Francisco. A 2019 report from Spectrum Location Services found that 660 companies moved 765 facilities from California to Texas in 2017 and 2018, including corporate headquarters, warehouses, data centers, software engineering offices and research hubs.

Last November, Charles Schwab announced that it would move its headquarters from San Francisco to a 71-acre corporate campus in Westlake, Texas, a suburb of Fort Worth. The move coincided with the acquisition of TD Ameritrade — which is based nearby in Southlake, Texas — in a deal valued at roughly $26 billion.

Uber also revealed in August 2019 that it would build a 3,000-person office in the Deep Ellum area of Dallas, which would be its largest hub outside of San Francisco.

Another one of the country’s largest companies, health care equipment and pharmaceutical distributor McKesson Corporation, recently moved most of its employees from the Bay Area to Las Colinas, another Dallas suburb. And, over the past few years, major financial firms like Capital One, Fidelity and JPMorgan Chase have built sprawling campuses in the Dallas-area suburbs of Westlake and Plano.

Adam Kaufman, chief operating officer of real estate crowdfunding company ArborCrowd, said that the local governments in Dallas and other cities in Texas have “issued a lot of pro-business incentives.” The state also keeps business taxes low in an effort to draw big corporations. He pointed out that the Dallas-Fort Worth area added 127,000 jobs last year — more than any other major metropolitan area in the country.

The two cities are growing so quickly that “there’s a real unmet demand” for housing in Dallas, said Broadmark Realty Capital CEO Jeffrey Pyatt, whose firm handles construction financing on single-family and multifamily residential projects. “That’s how we measure the markets we want to be in.”

Mashed potato jokes aside, ArborCrowd’s Kaufman said Boise, Idaho, was drawing technology workers from the Bay Area, who are looking for a cheaper cost of living and plenty of opportunities to bike, hike and camp in the nearby foothills and national forests.

“It’s close to California, and they have an educated workforce that works in tech, and is moving out there for quality of life and for the outdoors,” he said. “It’s growing from a population and job perspective. There’s a lot of plans for development, but housing hasn’t caught up yet with job growth.”

Forbes dubbed the Idaho capital the country’s fastest-growing city in 2018, thanks to an 18 percent population jump from 2010 to 2018. These days, the small metropolis on the Boise River is home to about 235,000 people, and its greater metropolitan area — which includes the nearby city of Nampa — has a population of roughly 730,000. The median home price in the area is about $365,000, which is 13 percent higher than it was only a year ago, according to Zillow.

Although the tri-state area has been hit hard by the virus, Madison Realty Capital’s Josh Zegen made the pitch for betting big on the Garden State.

“I’m seeing a big pickup around life science,” said the MRC managing principal and co-founder. “A lot of pharmaceutical companies are in New Jersey. Around New Brunswick, Rutgers, you’re going to see a ton of growth around life science expansion. You can’t just have your office in your home for lab work. It’s more resilient to this market right now, because you actually have to be in a lab.”

Other heavy hitters in the area include Pfizer, which has four separate offices with 2,000 workers in north and central New Jersey; Merck & Co. with 9,800 employees in Kenilworth; the research and development arm of Bristol Myers Squibb; and laboratories for multinational pharma giants Sanofi, Novartis and Bayer. Michigan-based medical device maker Stryker Orthopedics has a manufacturing facility and office with 2,000 workers in Mahwah. And French cosmetics giant L’Oreal has a huge presence in central Jersey, with 2,500 employees scattered across a testing center in Clark, a research facility in Princeton, and a manufacturing site in Somerset.

Despite significant coronavirus case numbers in Miami, many investors and lenders argued that the South Florida real estate market has thrived during the pandemic. (See story on page 32.)

And the residential market in Miami is positively booming. Single-family home inventory in Miami-Dade County has shrunk, with only 0.67 percent — or 4,516 out of 678,860 — of the area’s homes currently listed for rent or sale, according to a third-quarter market report released by RelatedISG International Realty.

Median home sale prices have also skyrocketed from $375,000 in May to $425,000 in August. That price is the highest on record since 2007, when the median sales price in Miami hit $388,000, according to the Miami Herald. Single-family home inventory is similarly restricted in nearby Broward and Palm Beach counties, both of which have less than one percent of their respective home inventories on the market.

In July 2018, the three counties had 19,331 single-family homes listed for sale. Two years later, there were just 12,934 homes on the market. The condominimum market across the three areas saw a smaller but similar decline, dropping from 27,337 units for sale in July 2018 to 24,572 units on the market this July. However, the number of single-family residential transactions had increased slightly year over year, while the number of condo sales declined this year compared to prior years.

Florida also remains the number one destination for transplants coming from New York, Illinois, New Jersey, Connecticut and Massachusetts, according to the RelatedISG report.

“Miami appears to be a relative winner in this story,” said Jonathan Goldstein, CEO of London-based investment firm Cain International. “The notion of getting away from [the virus] and into a warmer environment. And there’s an awful lot of companies moving down to Miami.”

Cain and OKO Group are co-developing a 57-story, 640,000-square-foot office tower at 830 Brickell Avenue in Miami, which WeWork will reportedly anchor. Tech firms occupy three million square feet of office space in South Florida, according to The Real Deal, and heavy hitters like Google, Apple, Uber and Facebook already have outposts there.

In June, L&L Holding Company and Carpe Real Estate Partners announced they would form a new joint venture to redevelop a three-acre assemblage in Miami’s Wynwood Arts District, which is part of L&L Holding’s broader strategy to expand into the South Florida market.

“We’re just building out the programming for what that development is going to be,” John Hutchison, assistant vice president of acquisitions at L&L Holding told CO in an interview last month. “We have a great set of local partners and are seeing a lot of other pipeline deals down in Florida.”

Even before the coronavirus struck the United States, Denver was in a housing crunch. Now, it’s become one of the most competitive housing markets in America, as it attracts tech workers fleeing the Bay Area, much like Boise.

In September, there were a record-low 3,041 homes for sale, down from the previous low of 5,693 homes in September 2017, according to data from the Denver Metro Association of Realtors cited by CNBC. Sales of homes priced above $1 million were up 80 percent annually, too, and the sales of luxury properties overall were up 15 percent compared to 2019, according to CNBC. The average price of a home in the Denver metro area jumped to a record $601,863 in July, according to Colorado Public Radio, and listing inventory across the state was down 42 percent year over year that month.

However, rents in Denver are down slightly, dropping five percent this November compared with the same time last year, according to rental listing site ApartmentList. Asking rents have been on the decline in the Denver area since March, reaching $1,277 for a one-bedroom and $1,564 for a two-bedroom in October.

“Despite all of our lenders’ and builders’ best efforts, they cannot keep up with the demand for housing [in Denver and Colorado Springs], and that is continuing,” said Broadmark Realty Capital’s Pyatt.