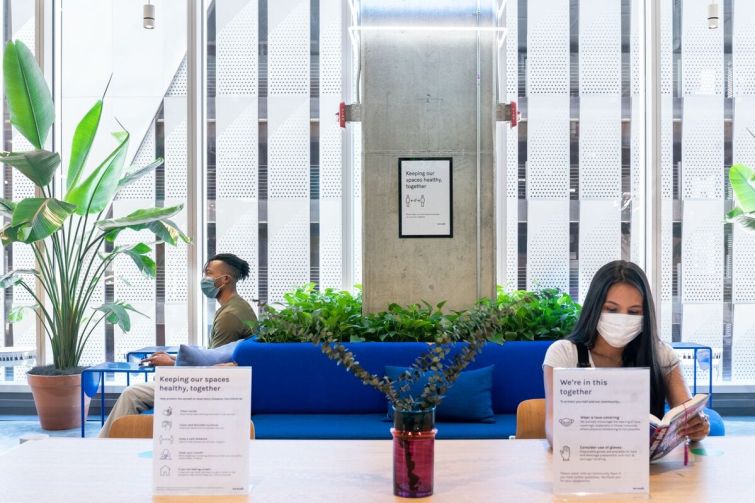 This WeWork location in Atlanta was in operation in the fall. Getty

Despite recent turbulence in the sector and the general economic disruption due to COVID, coworking and flex space operators and potential users are optimistic about its future. That’s according to a pair of new reports that paint an office market sector confident because of the disruption, rather than in spite of it.

Some 42 percent of flex space/coworking providers are optimistic about the sector’s future over the next three months at least, according to an October survey of global providers from Workthere, brokerage Savills‘ dedicated flex office advisory service. That’s up from the 40 percent optimistic in July. Long term, the Workthere survey found an even sunnier outlook among providers: 76 percent are optimistic or very optimistic about flex space/coworking’s outlook over the next 12 months (see charts).

The confidence is likely due to declines from July in the numbers of coworking tenants seeking rent relief and not renewing contracts, according to Workthere. It might also have to do with some meta-trends in the overall office market that favor leasing flexibility. 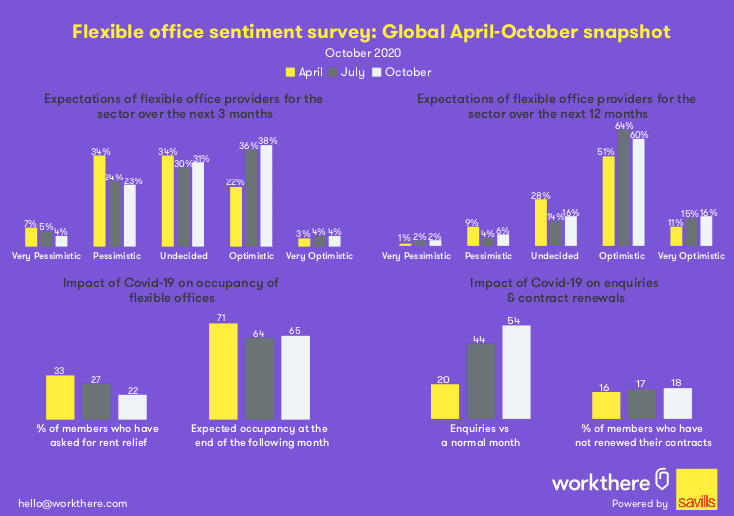 “What we’re seeing as we progress through this pandemic period is that market participants are behaving rationally in the face of uncertainty,” Ted Skirbunt, Workthere Americas’ national director, said. “Many small- to mid-sized tenants are not renewing traditional leases upon expiration, seeking more flexible solutions, and there are more opportunities out there to secure flexible space at deep discounts to even just a few months ago.”

Indeed, another report out in November, from the results of Colliers International‘s occupier services poll, found that 90 percent of flex space users anticipate that flexibility in leases will increase. Some 25 percent of these respondents see that increase coming in the form of more flexible workspace agreements; another 44.5 percent see it coming in greater flexibility baked into convention leases. In other words, there’s a market out there for coworking/flex space operators to capitalize on. Just wait, they say.

“The emerging consensus supports the theme of a more flexible future,” the Colliers report said. “For operators who can weather near-term occupancy shortfalls through prudent financial management, lease restructuring and reactive new products and services to retain members, there may be a very bright future ahead.”

Right now, the coworking/flex sector looks rather rocky. It had been growing exponentially in the years leading up to 2020. Cushman & Wakefield dubbed 2018 the “Year of the Coworking/Flex Office Sector” behind a 200 percent increase in flex leasing activity in that year and 2017.

Cracks started to show in 2019, however, with the fiasco surrounding WeWork‘s botched initial public offering. Doubts about coworking’s durability and appeal followed (2018, that year of the coworking sector, was ironically the same year that WeWork surpassed JPMorgan Chase to become the largest private occupier of office space in Manhattan).

The pandemic only appeared to worsen things. Dozens of coworking locations in major markets, such as New York City and D.C., have closed. In Manhattan alone, coworking operators have returned at least 1.2 million square feet of office space to landlords since the start of the pandemic, per a Newmark report. Companies, such as Knotel, Regus, Convene and WeWork have laid off staff amid the pullbacks. (Disclosure: Observer Capital, led by Observer Media Chairman Joseph Meyer, is a Knotel investor.)

But amid those pullbacks has come what the operators in one way or another label a refocusing. Instead of trying to expand as rapidly as possible, they are instead looking at which locations in which markets work the best and are focusing on those. It’s just as well they do. Even though coworking/flex still comprises a relatively small slice of any given office market, that slice is likely substantial enough to tip the whole thing. Another Savills report, for instance, found that if all of Manhattan’s coworking space went back on the market, the borough’s Class A availability rate would increase 48 percent.

Also, the refocusing is expected to encompass different ways of filling and operating — and profiting from — coworking and flex space. Larger corporate users are expected to lean on such space as they assess just how much office space they need post-COVID. Secondary and tertiary markets — think suburbs — might see a particular boomlet in coworking space use, as these same corporate users experiment with different hub-and-spoke arrangements.

And new operating and design models are expected to emerge, according to Colliers. These include a proliferation in franchises — Regus parent IWG said it wants to grow to as many as 50,000 locations by 2030 from around 3,300 now, according to Colliers — and new revenue and management agreements. Colliers also expects niche operators to emerge for users, such as athletes, artists, engineers and cannabis entrepreneurs (not such a blue-sky thought, nowadays).

Operators are clearly optimistic that such changes as part of the sector’s refocusing, coupled with potential users’ new expectations about office leasing in general due to the pandemic, will lead to better days. It seems to be working already: According to Savills’ Workthere report, inquiries for coworking/flex space in North America increased to 43 percent in October from 37 percent in July.