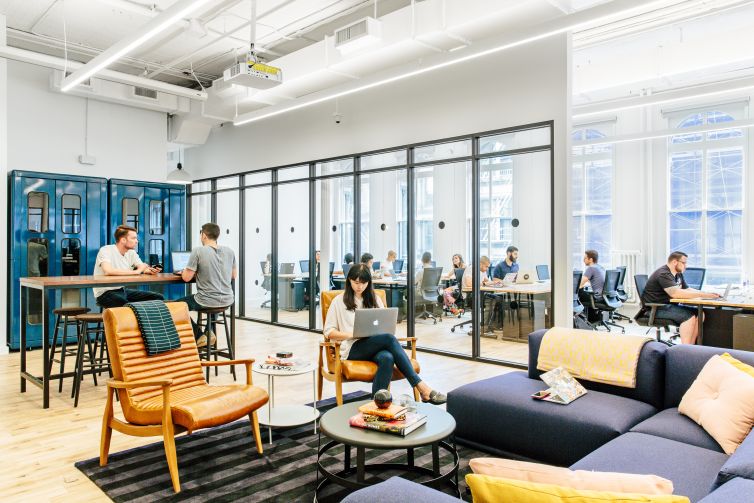 An HQ by WeWork location in Manhattan. Photo: WeWork

The number of coworking and flexible workspace locations around the country is expected to double or triple within the next five years, despite a recent slowdown in growth in the market sector in the past year, according to a report from Colliers International.

Despite the recent curb in coworking companies opening locations, operators and landlords expect growth to restart in the near future, as more and more tenants look to give their employees additional options for working closer to home.

“Occupiers are largely shifting away from a traditionally fixed-portfolio composition to one that is more of a network-driven portfolio that provides workspaces to employees that span a spectrum of new settings,” said Francesco de Camilli, vice president of flexible workspace at Colliers and author of the report. “Flexible workspace is really a key component that is going to allow occupiers to unlock this strategy. It’s really costly and time-sensitive to build out traditional office space in small- to medium-sized markets, where you might have a couple of employees.”

And Colliers expects it won’t just be the major players like WeWork and Regus driving that growth. The report said it expects more and more landlords to start their own coworking platforms — which some like Tishman Speyer and the Durst Organization have already done — and the emergence of niche providers like a coworking space for cannabis companies.

Coworking companies gobbled up new locations at a rapid clip in 2018 — leading Cushman & Wakefield to dub it the “Year of the Coworking/Flex Office Sector” — but slowed their expansion plans toward the end of last year.

Those plans grounded to a halt this year as occupancy rates of existing locations plummeted due to the pandemic. Instead, coworking companies have focused on streamlining their portfolios, keeping the best performing locations and ditching the others.

Signs of life have started to return, with Industrious announcing a partnership with landlord the Sioni Group to take over the entire 53,000-square-foot 44 West 37th Street, Crain’s New York Business reported.

But, even with the expected increase in demand and strong optimism in the coworking market, the pandemic has been painful for many providers. WeWork — which was coming off of a disastrous 2019 — has laid off thousands of workers, sold a majority stake in its China division, and has been fighting with its members over fees.

Knotel went through two rounds of layoffs, and recently said it would give back even more of its portfolio to landlords after it already walked away from about 20 percent of its five million square feet. It has been duking it out with landlords who claim the flex office provider owes more than $6 million in unpaid rent.

However, if providers can weather the storm, de Camilli said they should be able to come back stronger on the other side. Major companies have already started talking to Colliers about adding a flex office component to their portfolio, especially in secondary markets the coworking companies previously didn’t focus strongly on.

“That’s where the greater gap in supply is,” de Camilli said. “They need this product in those markets, just as much, if not more, than in the major cities.”

The report also found that, despite all of the headlines generated by coworking companies, they still only take up a small portion of the country’s office space. In the 28 metro markets Colliers focused on in the study, flex office providers only took up 1.5 percent of the total office stock in the second quarter of this year.

Manhattan had the biggest share of its office inventory given over to coworking companies with 3.1 percent, according to the report.

“If you’re bearish on flex space, you might think there’s nothing to see here, this is a fad,” de Camilli said. “If you’re a bull, this might look like a major opportunity. There might be a significant supply and demand mismatch.”