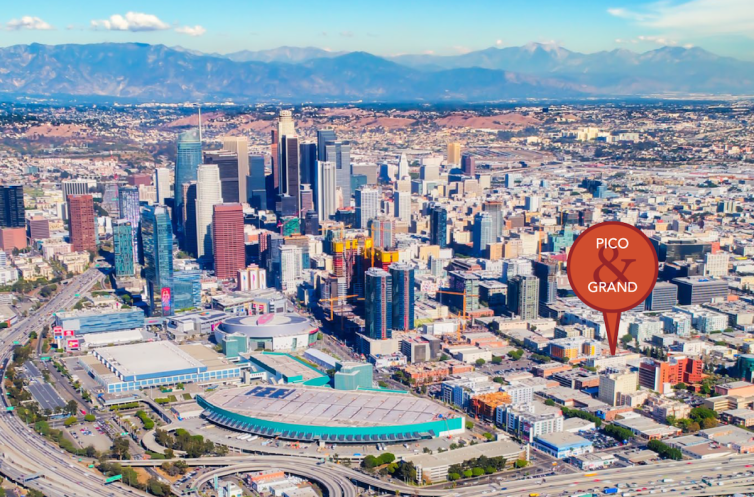 Los Angeles is set for a second micro-housing project by Housing Diversity Corporation (HDC), this one in downtown’s South Park neighborhood near the L.A. Convention Center.

The site is located at 1317 South Grand near the intersection with West Pico Boulevard, adjacent to Dignity Health California Hospital. The 57,000-square-foot project will be eight stories with 151 micro-apartments — 17 of which are designated for extremely low-income renters. The other units will be targeted for moderate-income earners making 80 percent to 120 percent of the area median income.

The project takes advantage of both local and federal incentives, including L.A.’s Transit-Oriented Communities (TOC) program. The TOC program allows increased density for projects with affordable housing near public transportation stops, and it has become one of the city’s most popular incentive programs in spurring multifamily development. It launched three years ago in September 2017, and by June this year it had accounted for the proposal of 23,429 units, including 11,321 in 2019, which made up 42 percent of the total proposed units in the city that year, according to the City Planning Department.

The project site is also located in a federally designated opportunity zone, which gives investors the chance to defer capital gains taxes and put them into real estate projects. Opportunity zones were born from the Tax Cuts and Jobs Act of 2017, and the program has encouraged more development in lower-income areas in Southern California.

The downtown project is HDC’s second in L.A. The first is an eight-story, 69-unit micro-housing project in Hollywood, which broke ground earlier this summer, Commercial Observer reported.

“Our goal is to create housing abundance in places with a severe constraint on supply,” Brad Padden, founder and CEO of HDC, said in a statement. Earlier this year, he told CO that the firm is actively looking for additional properties in L.A., and that he expects to submit plans for more projects soon.

HDC started its micro-housing strategy in Seattle, and expanded to L.A. to target the “missing middle” — referring to middle-income earners who can’t access housing options. Both HDC projects in Southern California were designed by L.A.-based architecture firm Steinberg Hart, and built by STS Construction and Development Services.

Downtown L.A. has been undergoing a years-long transformation spurred by a residential development boom. And 1317 South Grand is surrounded by other large multifamily developments, like OLiVE DTLA, E on Grand, WREN Apartments, and Onyx Apartments.

However, permitting for multifamily development dropped significantly this year due to the pandemic. The L.A. metro area experienced a 30 percent drop in multifamily development in the second quarter compared to 2019, bringing supply of new apartments to a five-year low. According to the City Planning Department, only 7,863 units had been proposed in L.A. halfway through the year, putting the city on pace for some 15,800 units in 2020. For comparison, the city averaged about 28,055 units proposed each of the previous five full calendar years.