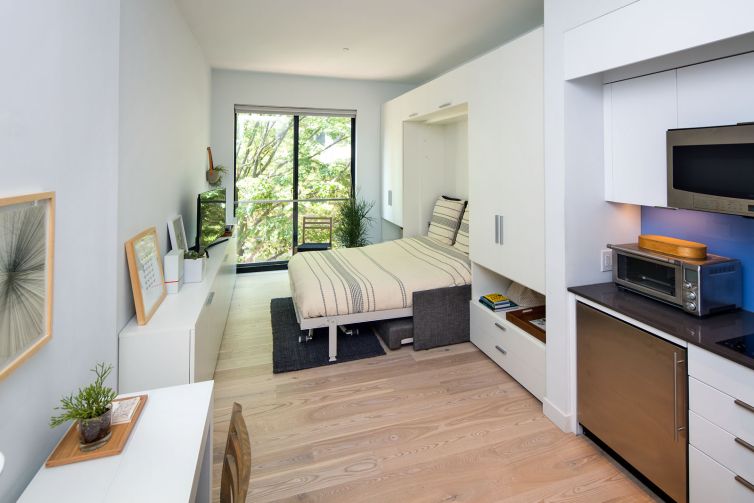 Patrick Kennedy, the owner of San Francisco-based development firm Panoramic Interests—which in June 2015 completed the first high-rise micro-unit building in the U.S. with The Panoramic in San Francisco—has an unusual take on housing.

“We had a revelation about six years ago that we should approach development the way In-N-Out Burger approaches hamburgers,” Kennedy said. “That is—simplify the menu, focus intensely on quality and lower the price. That’s what we want to do for housing.”

Kennedy can be more philosophical than practical on the topic when he wants to be; he has a quote from Leonardo da Vinci on a wall in his office: “Small rooms or dwellings set the mind on the right path, large ones cause it to go astray.”

Fair enough, but mental clarity is obviously not the only benefit of tiny-apartment living. Residents can, indeed, pay less money for their housing (although not necessarily on a per-square-foot basis) and they can lower their impact on the environment. For developers, they are cutting down their construction costs, helping the environment and potentially alleviating the affordable housing crisis nationwide and even beyond. And, as an added bonus, the developer can in some instances make more money per project if he or she can build more units.

Panoramic Interests offers 254-square-foot studios in The Panoramic for $1,850 a month and 524-square-foot three-bedrooms for $3,750 monthly—this in a city reeling from a housing shortage, where the average rent for an apartment is $3,738 a month, as per Rent Jungle.

Small-space living, or the tiny house movement—which is about minimizing one’s footprint—has been a topic of interest for a couple of decades, but it appears that more developers are taking the plunge. (And not just in America—Hong Kong has seen a 52 percent surge in the number of purchases of homes that are no bigger than 300 square feet, according to Bloomberg, due to rising home prices and shrinking family sizes.)

While there is no set definition for a micro-unit, “as general rule of thumb we’re talking about units that are about 300 to 350 square feet, sometimes a bit less,” said attorney Mitchell Korbey, the partner and chair of the Land Use & Zoning Group at Herrick, Feinstein. He noted that in San Francisco, one of the country’s most expensive rental markets, developers can construct apartments as small as 220 square feet so long as it includes a bathroom, a kitchen and a closet.

To a certain extent, micro-units are the souped-up version of boarding houses or single-room occupancies, which only offered lone rooms for rent. And they are a private version of coliving, which provides group living in high-rent urban areas.

In the 1960s and 1970s, cities clamped down on boarding houses. “Building codes were developed [in many cities] that required larger minimum unit sizes and prohibited the development or conversion of buildings into exclusively small units,” The Los Angeles Times reported.

As a result, different cities have different zoning rules that regulate density and living arrangements, though there are basic health and safety rules that apply in all jurisdictions. For example, Korbey said, bedrooms must have legal light and air, meaning an operable window that faces a street or open-space area.

But while different cities have reacted differently to shrinking the size of apartments, micro-housing has been heralded as a solution to the affordability and homeless crisis.

Joseph McMillan, the chairman and CEO of real estate investment and development company DDG in New York City and San Francisco, is one such proponent.

“Typically these are rentals,” McMillan said. “Look at where rents are and what they go for; it’s extremely expensive. A number of people have been priced out. So if you can do something that is well designed on a slightly smaller scale, you can make rents that are more affordable.”

Major cities have been grappling with the homeless problem—and it’s a problem inextricably tied to vacancy and affordability. On any given night in the United States, the homeless population stands at more than half a million people, according to the National Alliance to End Homelessness. And California and New York are two of the states with the biggest issues. Between 2016 and 2017, California reported the largest increase in its homeless population by 16,136 people. New York reported the second-largest increase with 3,151 people, the alliance determined.

In Hawaii, which has the highest rate of homelessness per capita of any state in the U.S., developers broke ground on the first affordable micro-housing complex in Honolulu on July 26, according to Next City. The 110 units will average about 300 square feet with rents from $500 to $995 a month.

Early this year, Jonathan Rose Companies opened the 123-unit Caesura at 280 Ashland Place in Fort Greene, Brooklyn. Of the mix of micro-units (34 pads) and larger units, about 40 percent of all of the units are affordable.

But they’re not exclusively about combating the housing crisis—and micro-living doesn’t always translate to micro-pricing.

At the recently introduced extended-stay Pod Pads at the Pod Times Square—which bills itself as micro, even though the units are on the bigger end of the scale—BD Hotels’ one-bedroom apartments span 431 to 624 square feet and two-bedrooms range from 556 to 758 square feet with monthly rents between $4,350 and $6,500, dependent on length of stay.

There are 45 such units on the top floors of the 28-story, 665-room hotel at 400 West 42nd Street just west of Ninth Avenue. (See here to read a story on this reporter’s three-night stay in a Pod Pad.)

They are by no means a bargain when you consider that the average rent for a one-bedroom apartment in Manhattan is $3,529, and that’s for 739 square feet, according to Jonathan Miller, the president of residential appraisal and consulting firm Miller Samuel.

But Richard Born, a co-founder of BD Hotels, said the company is providing “efficient living” by making it uncomplicated to move in and out of a Pod Pad.

“What we don’t do is what everybody else does in the residential space—make a big deal in renting an apartment,” Born said. BD Hotels doesn’t require a credit check or a letter from a previous landlord, more than a 30-day stay or a traditional lease. (“We don’t think people need to be constrained by length of stay,” Born noted, beyond 30 days.) A new resident signs a one-page agreement, which he can do online and pay with a credit card.

Further simplifying matters, Born said, “We don’t believe people want to deal with phone companies, utility companies, cable companies [so] we have everything bundled in.”

Born continued: “Effectively you could walk in with a credit card and live provided you have a T-shirt and boxer shorts. I think it’s that idea of easy access—easy in, easy out—that provides a space in the marketplace that doesn’t exist.”

With Pod Pads, Born said, it was about “sacrificing a little bit of real estate for style and convenience, and to be able to do that at a reasonable price.”

He acknowledged that the rent is not cheap, but “for a short-term rental, it’s certainly cheaper than most extended-stay options, [and] it’s certainly more user-friendly.” (At The Marmara Park Avenue hotel, which offers extended-stay apartments, a studio loft averages 500 square feet; the 30-day rent is $7,500.)

Moreover, living in a micro-unit does not necessarily mean forgoing in-apartment and building amenities.

The micro-units at Brooklyn’s Caesura are outfitted with media cabinets and convertible dining tables. The apartments also include a 49-inch smart TV, table lamp and complimentary Wi-Fi and cable. “It’s like a plug-and-play to just arrive and move in,” Rose said.

For odds and ends, like a ladder or additional dishes, Caesura has a unique lending library called Common Goods.

And many micro-housing buildings offer larger shared spaces, to create a sense of community. Rent at the Pod Pads includes access to a residents-only gym, a terrace and a conference room. At The Panoramic, the building has a rooftop garden, public lounges on every floor and a ground-floor café and lobby.

Micro-housing units, Rose noted, “typically come in a context of a building that provides larger common areas. They come in a pair, in essence—a smaller personal space and a larger communal social space to compensate.” So the design included a roof deck, an exercise room and a yoga room.

Micro-units serve different segments of the population, Rose said, from people first moving to New York City, to recent college graduates, to those on a job transfer. “Our micro-units are a good transition,” Rose said. Since opening Feb. 1, he added, the building is “fully leased and my instinct is that those tenants will tend to stay for a year or two and move on.”

Los Angeles-based Graham Hill, the founder and CEO of minimalist design firm LifeEdited, and who consulted on Jonathan Rose Companies’ Caesura building, has made living small his lifestyle and mission. He founded—and since sold—TreeHugger, a sustainability website, and has lived in multiple tiny abodes.

The sustainability advocate famously designed and lived in a 420-square-foot energy-efficient pad—which included proper sleeping quarters for two, a home office, a home theater, and a seated dinner for 12—at 150 Sullivan Street in Soho. The unit was meant to be a tiny-living prototype. He sold it in 2014 for $790,000 and purchased an even smaller pad—350 square feet—upstairs. The smaller place—which seats 10 and also has a home office—is on the market for $750,000.

Hill is a proponent of “doing more with less,” which is how he defines micro-housing, “and just downsizing.” He added, “We just supersized ourselves and that just doesn’t work for us.”

He pointed to the fact that European homes start at 1,000 square feet, but the average size of new single-family houses built in the U.S. is 2,631 square feet, according to the 2017 Census Bureau’s annual report on “Characteristics of New Housing.” In 1973, that number was 1,660 square feet, as per the report.

“It’s not like we’re any happier,” Hill said. “Our environmental footprints are way up, we have a ton of debt and our happiness level has flatlined since the 1950s. To top it off, the average house in the 1950s was 1,000 square feet, and now it’s 2,700 square feet, and we have smaller families.”

Hill said he believes we can all scale back by applying what he called “smart layout and design and furniture and technologies of every sort.”

Kirk Goodrich, a partner of Brooklyn-based Monadnock Development, isn’t a fan of the term “micro-housing.”

“We don’t call it a micro-unit building,” Goodrich said. “It’s not a helpful description. All it meant was it was less than 400 square feet. In my mind, ‘micro’ might connote to someone that it’s inferior,” but these units are more than small with their “design and layout of space,” window placement and size, and ceiling heights.

Completed in 2016, the 36,000-square-foot building is comprised of 55 rental studio apartments ranging from 265 to 355 square feet with the average at 305 square feet. Twenty-two of them are affordable, of which eight are Section 8–reserved for formerly homeless U.S. veterans and come with integrated furniture.

For the moderate-income units, residents pay a rent of $950 a month. The middle-income residents pay around $1,500 a month and the market-rate renters pay between $2,500 and $3,200. A large number of the market-rate units are furnished and include a package of amenities and services like free Wi-Fi, weekly housekeeping and grocery shopping, which can also be purchased by other residents à la carte.

DDG’s McMillan also prefers the term “well-designed efficient homes” to micro-housing, which he claims has a negative connotation. DDG is constructing micro-housing in San Francisco for its first-ever rental buildings.

At DDG’s two projects—235 Valencia Street and 188 Octavia Boulevard—there will be less than 100 units apiece. Although prices have not been set yet, the units will range from 362-square-foot studios to 499-square-foot one-bedrooms to 583-square-foot two-bedrooms to 913-square-foot three-bedrooms. At least 15 percent of the units at each project will be designated affordable. They will both be complete in mid- to late 2019.