Will Opportunity Zones in California Be Golden? 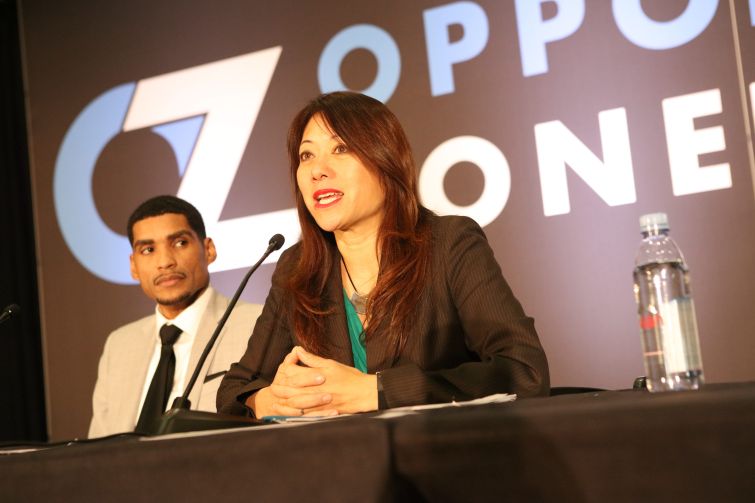 Fiona Ma and Jovan Agee during their keynote at the Opportunity Zone Expo. Photo: OpportunityZoneExpo.com

To those outside California, it might be perplexing that the state treasurer, Fiona Ma, got the loudest applause during her keynote address at the NES Financial-sponsored Opportunity Zone Expo for simply proclaiming that when it came to opportunity zones, the state would abide by the federal government tax statute. But California has always gone its own way when it comes to taxing capital gains income.

“California is open for business. We are behind some of the other states that have been doing a little bit more… but we are going to be catching up pretty quickly,” Ma said during her address before a sold-out crowd at the JW Marriott  Los Angeles L.A. Live in Downtown Los Angeles last month, before outlining a “culture shift” to a more business-friendly approach. in Sacramento. Some might attribute the culture change to the ongoing lack of affordable housing in the state and, interconnected homeless crisis and the newly elected Gov.  Gavin Newsom‘s campaign pledge to build 3.5 million homes from the time he takes office through 2025.

Partnering with private commercial developers, enticed by the added tax benefits—and helping streamline the entitlement and zoning process—would obviously be key to creating multifamily housing in a timely fashion.

It wasn’t surprising to attorney Michael Pruter, a partner at Allen Matkins, that Ma got such a rousing response to her proclamation. California taxes all capital gains as regular income, unlike the federal government, which differentiates between ordinary income and long- and short-term capital gains for tax purposes. Unlike at the federal level, that means Californians will be taxed at a rate anywhere from between 1 to 13.3 percent, depending on one’s tax bracket.

“A large part of California’s tax base is driven by high-net worth taxpayers who have capital gains,” Pruter, a member of the firm’s opportunity zone specialty team, told Commercial Observer. “Traditionally, the taxpayer realizes large capital gains through stock and then pays California income taxes. Governor Newsom’s budget notes the difficulty of forecasting personal income tax revenue in California due to significant reliance of the general fund on capital gains paid by a small portion of California taxpayers, noting that in 2016 the top 1 percent of income earners paid just under 46 percent of personal income taxes.”

“It’s a little vague about how broad that conformity is,” Pruter said. “It’s listed in the budget as dealing specifically with affordable housing and green technologies, renewable technologies. It’s unclear whether that applies to all the benefits of the statute or applies only to those two specific areas invested within California as opposed to a U.S. California taxpayer that invests in doing business outside the state. We’re all looking to see if that changes with the new governor and his budget.” Pruter was referring to the final enacted budget to be passed by the California legislature and signed into law by Newsom this summer.

Opportunity zones have been a source of heightened attention since they were created under the December 2017 federal tax reform. The provision allows investors who’ve earned capital gains in any line of business to reinvest the income in real estate projects in one of the 8,700 distressed zones the Treasury Department approved last year, deferring taxes on those gains, or, if they are held for 10 years, waived completely. The Internal Revenue Service released a first round of proposed regulations and guidelines for opportunity zones in October 2018, with a second public hearing expected to happen last month, then delayed due to the partial government shutdown.

Finally, the public hearing occurred yesterday, a Valentine’s gift perhaps to the bevy of private sector suitors awaiting further guidance on the subject. During the five-hour hearing, more than two dozen stakeholders shared their concerns over issues including the lack of clarity over whether a fund could sell individual assets it invests in and redeploy them to additional opportunity zones without losing the tax benefits, the tight six-month window in which such funds have to deploy capital before being penalized and the need to loosen restrictions on funds investing in businesses versus just real estate located in the zones, according to Bisnow.

The IRS will release its second round of regulations in the coming months.

As eager as private investors are to enter the fray, there obviously is still uncertainty as to how to reap the most gains—and tax benefits—from the program, especially in California, which is notorious for the time it can take to entitle commercial development projects. Under the federal plan, investors have a mere six months from realizing a capital gain to invest it in an opportunity zone. After that, properties in which the fund invests, either directly or indirectly, must either be “substantially improved” within 30 months or have their original use commence with the opportunity fund in the opportunity zone.

Yet the opportunity—and need—in California, which has 879 of the 8,700 underserved zones identified and, more ignominiously a state beset by an affordable housing and homeless crisis, is huge.

Shlomi Ronen, a managing principal and founder of Dekel Capital in Los Angeles, said the entitlement process is always a challenge in California, whether for an opportunity zone project or otherwise.

“In major markets in California like Los Angeles, from the time you buy land to putting a shovel in the ground on the fast side can take two years and that’s if the property is zoned for what you want to develop,” he said. “In Texas, for comparison it would happen within six months.”

As a consequence, Ronen said investors interested in entering the opportunity-zone market will be seeking projects that are already entitled—and the owners of those properties will be charging a premium for them.

“The premium is equal to the tax savings and tax free gains that one would get,” he said. “So, for example, if someone thought they could get a conventional development deal built to a certain return on costs and the savings from the deferral of capital gains along with the tax free gains amounted to 75 basis points then they could pay more for the land in an opportunity zone and get to the same after tax returns.”

Douglas Bystry, the president and CEO of Orange County-based Clearinghouse CDFI, which has been a lender for low-income community projects nationwide for the past 22 years, said one way around the time crunch is to look at expanding and improving properties that already exist in an opportunity zone.

“If you are just starting out with a new project, it could take a year to entitle, easily, but remember, too, this program works very well for existing businesses in low-income communities that want to expand,” he said. “And the processes to get building permits to expand are very different. A lot of it depends on—does the project require a zone change or things of that nature.”

The receptiveness of local officials and public support can also help streamline the development process. “There are a lot of communities in California that are aware of this program that we are working with that want to put the opportunity fund money into their communities,” Bystry said. “They are fast-tracking zoning, building permits, all the entitlements that might otherwise slow down the process.”

That said, he has found city council members in smaller communities are not always versed on how the actual program works.

“They felt that just because of [they had opportunity zones] all this federal money was going to drop from the sky and they were going to be able to spend it and do whatever they want,” Bystry said. “It doesn’t work that way. There has to be good solid projects and, in our opinion, they have to be projects that provide a very good return to our investors and have a tangible impact in the communities that we serve.”

Yusef Robb, a senior adviser to L.A. Mayor Eric Garcetti and the nonprofit Accelerator for America, is well aware of the disconnect between the investment knowledge base of the public and private sectors.

“According to the Feds, [this could amount to] a $100 billion investment pool that could and should create positive change in some of our nation’s in-need communities. The question is, will they?” he said. “That’s where we’re stepping in. We want to help local communities steer these investments to not just provide a return for the investor, but also a return for the community.”

To do so, the nonprofit, which aims at providing strategic support to local initiatives on job and infrastructure, announced the launch of the California Opportunity Zone Partnership last week. (Garcetti chairs the accelerator’s advisory board, which is made up of business leaders and public officials including several U.S. mayors.) Partners include the State of California, Energy Foundation and the Cities of Oakland, San Francisco, San Jose and Los Angeles, with the goal of educating public officials on opportunity zone best practices and how to work with private investors to identify and fund projects of the highest need and value in their local communities.

“I can build a hipster hotel, but will that return for the community be as much as another use, probably not,” Robb said. “But the private sector is never going to do that research, that’s just not their thing. We’re training up our cities to be able to go to investors and say, ‘here’s a project you should be doing,’ in a way that provides a return for the investor. Let’s meet them halfway and be a participant when it comes to the allocation of these investments to achieve as many win-wins as possible.”

Time, as it is overall with opportunity zones, he said, is critical. But, unlike private investors, eagerly awaiting upcoming guidance from the federal government, which was delayed due to the partial shutdown this winter, Robb sees the benefit of the pause.

“This is a good time that we can use to get cities ready to rock and roll because when the rates get finalized, then that’s when the private sector is going to go nuts,” he said.