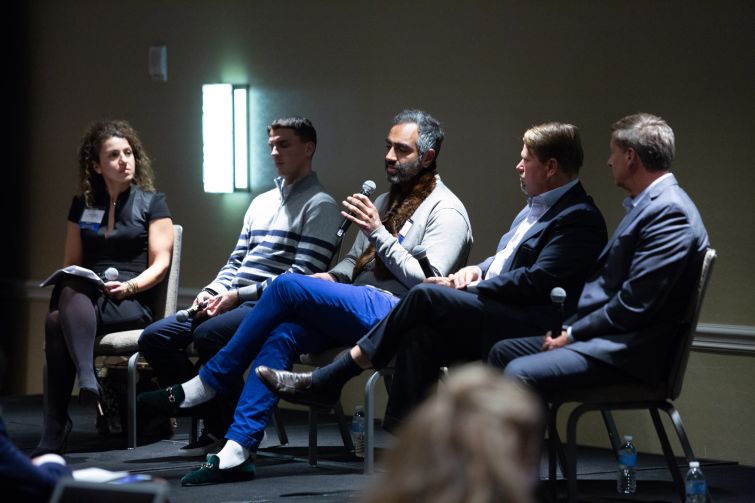 If you count the world’s oldest surviving buildings — starting with 7,000-year-old tombs in France — the real estate industry is literally Neolithic. But as technology democratizes the modern-day mysticism around computing and big data, industry leaders are taking a more aggressive approach to propel the business out of the Stone Age.

That was the takeaway at Commercial Observer’s first-ever Innovators Forum, held yesterday at the Sheraton New York Times Square Hotel in Midtown. (In a ballroom, incidentally, where the upholstery was looking a little prehistoric itself.)

“Our goal is helping Googlers thrive,” said Google‘s Paul Darrah, using the company’s cheeky term for the people who make up its workforce. “Food service, amenities, fitness, and well-being” are all part of the equation, he noted.

Of course, that requires investment. Google’s coffers are up to the task, but what about office tenants that lack the wherewithal to tackle workplace improvements on their own? Amol Sarva, co-founder of Knotel, said that flexible-workspace companies like his may have a role to play.

“We help you unlock so much desire and value without your having to go reinvent [the workspace] yourself,” Sarva said. “Our system is pushing through innovations.”

In a sense, HqO fills a similar niche of outsourcing office-space innovations to make the workday go smoothly for employees, as Chase Garbarino, its CEO, explained. The company’s software helps tenants’ employees control building infrastructure, order food and even hail a ride home.

“We facilitate the experiences so everything can be seamless,” Garbarino said.

Jamestown‘s Michael Phillips was also on hand to shed light on the innovation question from a traditional office landlord’s perspective. His appearance at the event coincided with a different brand of innovation from Jamestown: the launch of a new direct-to-consumer investment platform, a $50 million fund that will allow people to buy into the company’s commercial projects with a minimum contribution of $2,500.

Does the company have any more significant purchases planned in the life sciences realm?

In the conversation, which also included The Durst Organization‘s Helena Durst and TF Cornerstone‘s Jake Elghanayan, talk turned to how innovation has become more crucial than ever to serve an increasingly diverse tenant base in the city, a scene that not so long ago was utterly dominated by stodgy finance-industry firms and their hangers-on. RXR‘s Seth Pinsky, for his part, said that innovation is important when it comes to keeping commercial real estate relevant to millennials, who continue to rise up through the ranks of the workforce.

“As long as we can continue to attract talent, we’ll be successful,” he said of the need to keep New York City’s commercial building stock relevant.

In another panel, execs discussed how return-oriented investors have sometimes lacked clarity on how tech investments accrue to their profits.

“When you talk to anyone who needs a solution, [their question is], ‘Can you solve it: yes or no?'” Salmanson said. “They don’t care if you use artificial intelligence, or have an army of people work on it.”

And Matthew Baron, joining a panel that was moderated by Tech:NYC‘s Julie Samuels and that also included Okapi.ai‘s Maya Gal, agreed that CRE’s slow adoption goes back to its very nature.

“Our business is chess, not checkers,” as Baron put it.

But some companies whose representatives spoke at the event have made innovation a priority, these people said.

One was William Rudin, who said his firm, Rudin Management Company, has been a leader in adopting high-tech information systems.

“How do you drive a car without knowing how much gas you have, or how fast you’re going?” Rudin asked, drawing an analogy to the data needed to run buildings efficiently.

Lucas Falk, an executive at Related Companies, said that the company’s work at Hudson Yards spawned intense brainstorming about how to integrate the latest technology, including infrastructure innovations.

“How do you future-proof buildings that will be around for 100 years?” he mused.

Larry Silverstein, the founder of Silverstein Properties and an elder statesman of the city’s real estate if ever there was one, agreed with other speakers that upgrading buildings is a challenge, but labeled it a necessary one.

“It’s happening all over New York,” Silverstein said. “There’s a future in the older buildings.”

At day’s end, Gensler, VTS, Logical Buildings, Near Map, and HqO all won awards for pushing the boundaries of technology and sustainability. SL Green Realty Corp.’s CEO Marc Holliday was recognized as the innovator of the year, as he led the firm’s marquee projects including One Vanderbilt in Midtown and One Madison Avenue in Midtown South. Related Companies’ and Oxford Property Group’s 30 Hudson Yards got a nod as the smart building of the year.