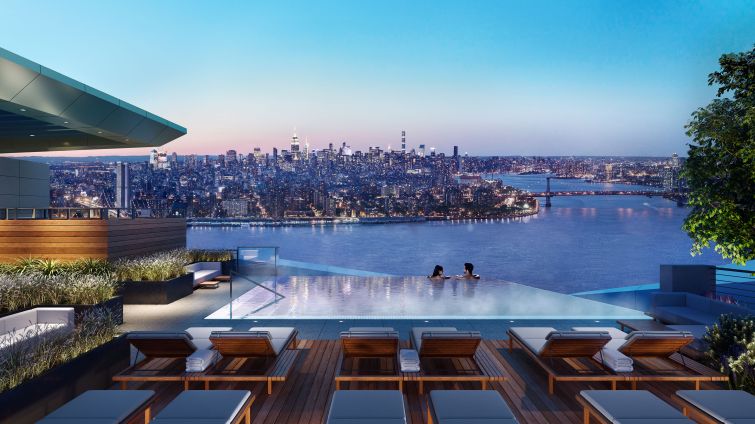 Gary Barnett’s Extell Development Company announced this week that it has locked down $530 million in financing for Brooklyn Point—its first Brooklyn development and the tallest residential tower in the borough.

M&T Bank led a consortium of lenders—including Capital One and Intesa SanPaolo Bank—in providing a $425 million senior construction loan in the deal, while RXR Realty provided a $105 million mezzanine loan.

The Real Deal first reported news of the financing.

The 720-foot-tall, 68-story building, located in Downtown Brooklyn, will be the first and only for-sale development at City Point. So far, 26 stories have been completed and construction is expected to wrap in 2020. The building’s amenities will include a 35-foot rock climbing wall, a yoga studio, co-working space, a chef’s demonstration kitchen, a game lounge and a children’s playroom. The property also includes a landscaped terrace on the ninth floor and an infinity pool on the 68th floor—the highest residential rooftop infinity pool in the Western Hemisphere.

Pricing for studio to three-bedroom residences start at $850,000 and buyers benefit from a 25-year tax abatement resulting in total carrying costs starting at just $655 per month.

“We’re extremely excited about this project, it’s very well amenitized and has an accessible price-point” Matt Petrula, M&T’s head of commercial real estate, told CO. “We have an ongoing relationship with Extell, and respect them greatly as a sponsor.”

“This project is in a great location and Gary and his team built a fabulous project,” Maturo said. “We like the deal, we like the location, we like the price point that he is going after—it’s more mid-range—and we think it’s going to do very well.”

The transaction is part of a bigger push into the lending space for RXR. As first reported by CO, RXR partnered with a Canadian pension fund in March to form a joint venture that would make mezzanine and preferred equity investments in office, residential, industrial and retail properties.

“We’ve been developing our debt platform over the past year or so and our joint venture has been going extremely well,” Maturo said. “In fact we’re pretty much through that venture and we’re forming a debt fund that we’re currently marketing. The [Canadian] institution is going to invest again on a joint venture basis with us, and we’re raising $500 million in a fund vehicle to continue to invest on the debt side.”

RXR just began its investor roadshow for the new fund to a “very good reception,” Maturo said, adding that the firm will probably start closing the fund in the third quarter.

Looking at current market conditions, Maturo said that RXR sees the debt environment as a better risk-benefit opportunity, and somewhere that the company can add real value to transactions. As experienced real estate owners and operators, senior lenders are also pretty comfortable with RXR in the mezz spot, Maturo said.  As such, “we continue to explore opportunities on the debt side,” he said. “We’ve developed relationships with some great sponsors, including Extell, and we continue to invest in those sponsors.”

Indeed, RXR also provided $463 million in financing to Extell for its construction of One Manhattan Square, 55 Tenth Avenue and 500 East 14th Street in 2016.

Regarding the Brooklyn Point transaction, Barnett said: “This transaction marks a significant milestone for our first development in Brooklyn. It is a testament to our excellent reputation with the lending and institutional investor communities as well as the level of confidence in Downtown Brooklyn. Our firm is known for developing prime luxury real estate throughout the city with striking architecture, sophisticated interior design and extraordinary amenities. We are proud to bring this same level of quality and craftsmanship to Brooklyn.”