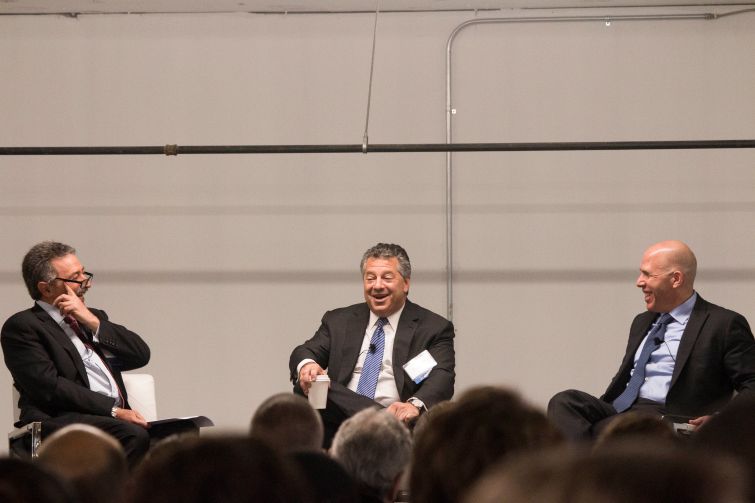 Midtown may be one of the most expensive office markets in the world, but it still struggles with upgrading its infrastructure and modernizing its buildings, said panelists at Commercial Observer’s Midtown Forum on Thursday at RXR Realty’s 75 Rockefeller Plaza.

During a panel on Grand Central and Midtown East, RXR CEO Scott Rechler took a not-so-subtle shot at the Metropolitan Transportation Authority, where he now serves on the board. He charged that the public sector “hasn’t been good at delivering on time and on budget,” particularly with projects like East Side Access, which is expected to cost $11 billion by the time it’s finished in 2022. He praised public-private partnerships like SL Green Realty Corp.’s work on the Grand Central subway station, which the office landlord is doing in exchange for a 50 percent density bonus on its under-construction One Vanderbilt tower.

SL Green CEO Marc Holliday, the other speaker on the panel moderated by Fried Frank’s Jonathan Mechanic, noted that he felt optimistic about East Midtown despite the struggles with subway repairs and overcrowding on the Lexington Avenue line. “I love East Midtown and I love Grand Central,” he proclaimed, while answering a question on his firm reportedly buying a stake in 245 Park Avenue. “Park Avenue will continue to be a very compelling business address. We’re pretty selective in terms of where we’re going to focus our acquisitions.”

On the morning’s second panel, moderated by Michael Zetlin of Zetlin & De Chiara, Ken Fisher, co-managing partner of Fisher Brothers, lamented how difficult it was for landlords to take advantage of the recently passed Midtown East rezoning. He noted that JP Morgan Chase’s demolition of its headquarters at 270 Park Avenue would be incredibly expensive and time consuming, because workers would have to dismantle it piece by piece. “It’s not going to be an easy proposition,” he said. “We’re all going to get a peek into what will happen with landlords if they want to take advantage of the Midtown East rezoning.”

Another speaker, broker David Falk of Newmark Knight Frank, noted that it was time for Midtown buildings to update their amenities and modernize their security systems so people would no longer have to wait in line at the reception desk to get in. “Why not have people just preregister and be able to swipe in?”

Despite some of the hurdles with aging buildings, Robert Lapidus, president of L&L Holding Company, defended Midtown: “The talk of Midtown being dead isn’t true. But our commodity products are. But if you’re in the business we’re in where you’re taking outside capital to create what tenants want…We’re delivering.”